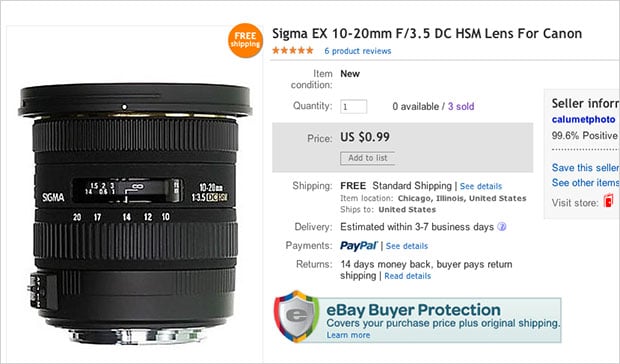 Photographers often scour eBay listings in hopes of snagging a good deal on camera equipment, but usually they’re not expecting to find gear worth hundreds of dollars sold for the same price as McDonald’s Dollar Menu items. Well, that’s exactly what one lucky eBayer discovered a couple of weeks ago. The person stumbled upon a strange listing: reputable camera retailer Calumet Photo was selling a brand new Sigma EX 10-20mm f/3.5 lens for Canon DSLRs — worth about $590 — for just $0.99! And not just one lens, but three!

The lenses were apparently being sold as Buy It Now listings (you purchase the item at the specified price instead of bidding on it), and there was even free standard shipping within the United States. The buyer discovered the ridiculous deal at 7:38 in the morning, and purchased one of the lenses. When he/she noticed that the purchase actually went through, the person dropped another $2 and snatched up the remaining two lenses just 28 seconds later.

And just like that, one of the sweetest photography deals eBay had ever seen — $1,770 in glass for just $3 — was claimed:

Sadly, a glance through Calumet’s current Buy It Now items doesn’t reveal any similarly-priced lens listings, and it seems unlikely the mistake will ever be made again.

We’re very curious as to whether Calumet will try to wiggle out of this apparent case of human error, or whether it will honor its crazy price and take the massive loss (while making some photographer exceedingly happy).

Update: Zane from Calumet writes below that the buyer settled for a gift card after Calumet called the person to explain the mistake. Win win for both sides.

Facebook Rolls Out Photo Sync Feature for Android and iOS