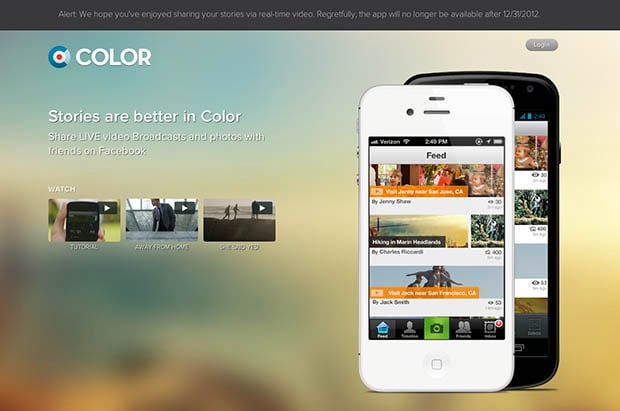 All good things come to an end. Bad ones do too. After denying rumors last month that it would soon be shutting down, the over-funded photo-sharing app Color has now announced that it will indeed be shuttering its service.

A notice displayed at the top of the Color website states,

Alert: We hope you’ve enjoyed sharing your stories via real-time video. Regretfully, the app will no longer be available after 12/31/2012.

Although it raised a staggering $41 million in funding last year, the app was never very popular among photo sharers, losing out to companies that raised far less but offered far more (Instagram, for example).

Company CEO and serial entrepreneur Bill Nguyen now has a pretty nasty mark on his resume: TechCrunch is reporting that Apple only paid $7 million for Color’s “20 person technology team and some of its key intellectual property assets” — an order of magnitude less than the hundreds of millions (or even billions) that the investors were undoubtedly hoping to see when they pumped $41 million into the pre-launch startup.

It gets worse, though: TechCrunch is also reporting that a former employee is suing Color and Nguyen for “humiliation, mental anguish, and emotional distress.” The lawsuit has some pretty nasty accusations against Nguyen:

In retaliation for Solomon’s investigation into his misuse of Color’s corporate funds and other fiduciary misconduct, Defendant Nguyen expressed his intent to fire Solomon in front of Color employees on numerous occasions. Color employees, including Plaintiff Witherspoon, had no doubt that Solomon was on her way out as a direct result of Nguyen’s vindictive threats.

Cameras and Film in White, With All Visual Branding Removed

Survey: Majority of Non-Pro DSLR Users Use Their Cameras as Point-and-Shoots