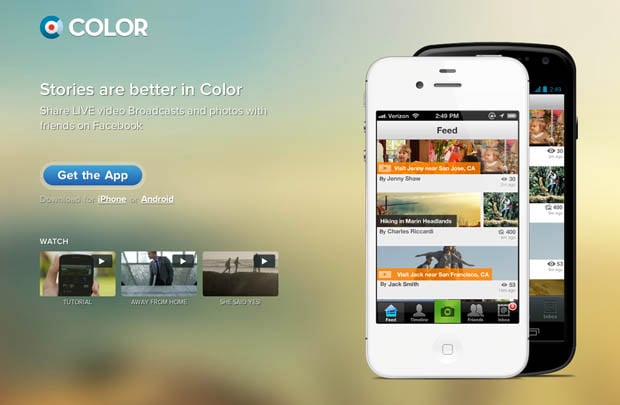 People say money can’t buy happiness. Turns out there’s another thing it can’t buy: photo sharers. Despite raising a staggering $41 million in funding before even launching, the photo sharing app Color has been struggling to find users. Even after major pivots that changed the service’s DNA, the app only has less than half a million active users.

There was a good deal of buzz in the tech world today after Ricardo Bilton of VentureBeat reported that the app has been slated for closure.


The news was reportedly sent out by Color’s finance VP Andrew Urushima yesterday in an email that said,

As you may or may not have heard, Color is going through a number of changes. Last week, the Board and major shareholders voted to wind down the company.

Just as the story began hitting the front pages of major news sites, TechCrunch published an article that stated the company has no plans of shutting down:

“Color is not shutting down,” a spokesperson speaking on behalf of Color and its largest investor Sequoia Capital said in a phone call this morning. The spokesperson declined to comment further.

Whether or not the app will be shuttered in the immediate future, it’s clear that the company needs to find some traction, and find it fast. Although it reportedly has enough dough under the mattress to survive for another five or six years, the investors are probably getting uneasy about watching the money continue to be burned by an unloved app.

Instagram didn’t have a solid business model even as it ballooned to tens of millions of users. Luckily for that company, Facebook was willing to fork over 1% of its equity in order to snatch it up. Without the same meteoric growth, Color is going to have to pull a rabbit out of a hat to make the $41 million pay off for the investors.