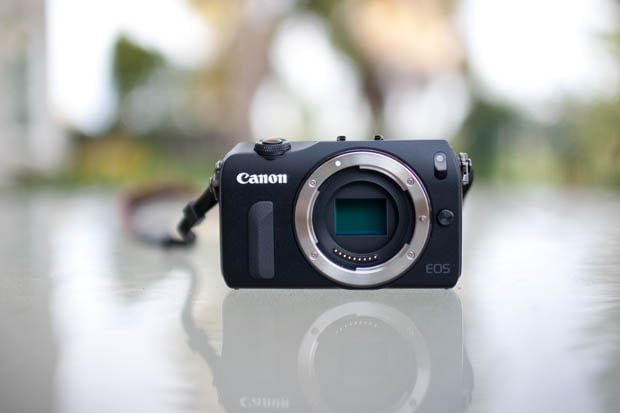 Canon made its loyal customers wait quite a long time before it finally joined the mirrorless camera revolution, announcing the Canon EOS M back in June. The camera comes nearly four years after Panasonic kicked things off by “friending” Olympus — forming the Micro Four Thirds alliance — and introducing the Lumix DMC-G1, making Canon the last major DSLR maker to join the fray.

Specs-wise, the EOS M is probably the mirrorless camera most Canonites were hoping and praying for: a point-and-shoot sized camera that packs a serious sensor and that can be used with Canon’s full lineup of EF/EF-S lenses dating back to 1987.

It’s almost as if a Canon designer misread a spec sheet and accidentally made a DSLR as a compact: the EOS M is nearly identical to the Canon 650D/Kiss X6i/Rebel T4i entry-level DSLR when you look at the guts and features. 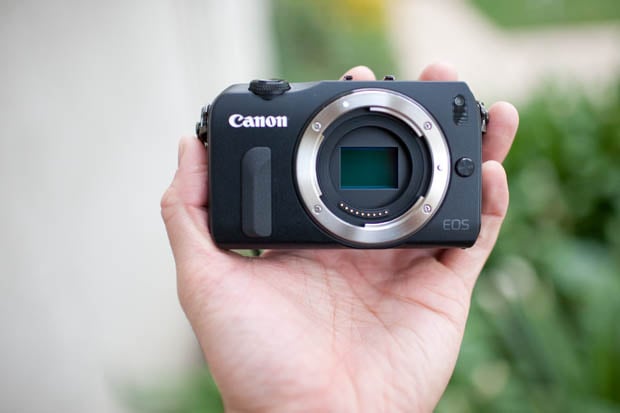 Inside is an 18-megapixel APS-C CMOS sensor, slightly smaller than the APS-C sensors used in Sony NEX and Samsung NX cameras, but larger than (or equal to) all the other non-rangefinder mirrorless cameras in the market.

The camera features a new mount (the EF-M mount) that currently has two lenses: the 18-55mm f/3.5-5.6 IS and the 22mm f/2. You’ll need to shell out an extra $200 for the official Mount Adapter if you want to pair the camera with your existing collection of Canon lenses.

This review will be a little different than most of the ones you’ll find for this camera: I was only able to test how the camera performs with the Mount Adapter and a number of EF lenses; I didn’t test either of the two new EF-M lenses. Just keep that in mind as you read on, as some of the points I mention might not apply if you don’t plan on treating the camera as a miniature DSLR replacement.

Canon definitely nailed the concept of portability with this camera. It’s astonishingly small and lightweight. If you look at the camera from the back, it actually looks just like a Canon PowerShot S compact camera: 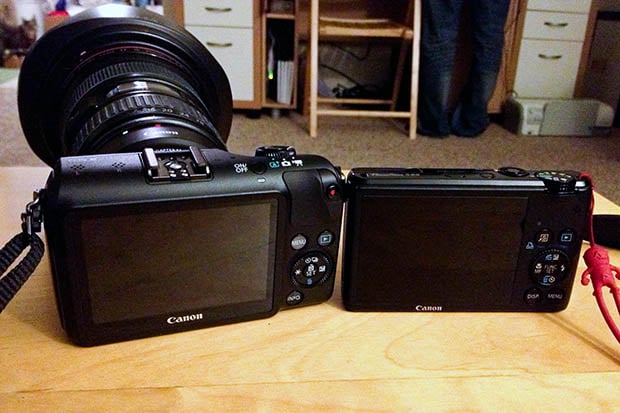 If you own a newer PowerShot S, you can get a rough idea of what this camera feels like by holding your camera in your hands.

While the lightness is a desirable attribute, especially when using the smaller and lighter EF-M lenses, it makes things a bit strange when using the camera with larger EF lenses. Unless you’re using a small non-L prime, the lens is likely going to cause the setup to be very front-weighted.

You’ll eventually get used to it, but it feels like you’re using a different set of hand muscles than the ones you’re used to using when shooting with a DSLR (especially when trying to shoot one-handed). Depending on what lens you’re using, you may find yourself in a constant battle to keep your lens parallel to the ground. 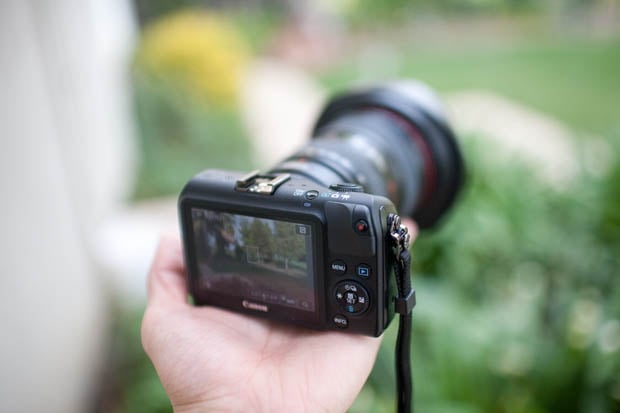 The camera features all the manual modes you’d expect from a DSLR, but has a sparse point-and-shoot-style physical interface. Canon makes up for the lack of physical buttons and dials by packing a gorgeous 3-inch touchscreen onto the back of the camera.

Most of what you need can be accessed directly by pressing sections of this screen or by pressing the Quick Control/Setting button at the center of the Main Dial. The interface will slow you down a tad if you’re used to using a DSLR, but the system is well-designed and easy to use.

When reviewing your photos and videos on the touchscreen, it feels very much like you’re using a smartphone. Swiping moves you through your files, and zooming into photos simply involves pinching the screen. 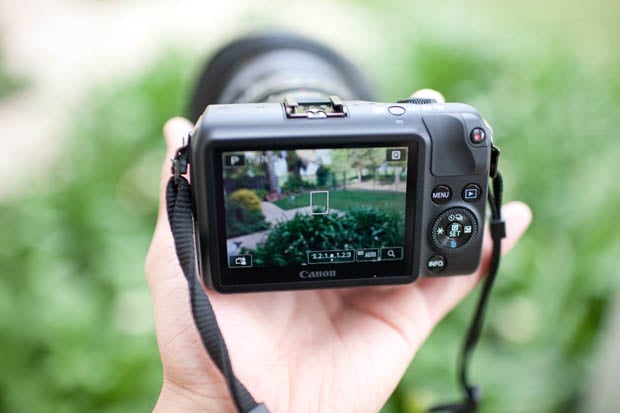 Finally, and most importantly, the image quality of the EOS M is top notch. You won’t be able to tell a difference between the photos that pop out of it and any of Canon’s APS-C DSLRs.

The large sensor also gives the camera fantastic low-light performance. ISO goes all the way up to 12800 (25600 with expansion), and photos you get at the high end are actually quite useable. They’re not too noisy (i.e. they don’t look like someone spilled colored sprinkles on your photo) and the color reproduction is accurate.

Here are some sample photos shot using the camera:

The Canon EOS M has one glaring weakness that may be a dealbreaker for many photographers: a horrible autofocus system.

One of the first things I noticed about the camera after picking it up was that the perpetual focusing made the camera sound like it had an uncontrollable stutter. It sounds as though the camera is making the lens take baby steps as it attempts to bring the subject into focus.

You’ll want to jump into the camera’s settings and turn Continuous AF off. Otherwise, the lens will constantly makes a sputtering noise as the camera tries to stay focused at all times. You might not notice the sound in most everyday environments, but in quiet settings it might drive you mad.

What’ll drive you even more mad is how painfully slow the autofocus is at times. Although the camera appears to bring the subject into focus rather quickly, it takes another moment or two before the AF indicator turns green, allowing you to finally snap your photo.

Here’s a quick demonstration of the camera’s AF speed (and a glimpse of the touchscreen interface):

The speed seems to vary a bit depending on the lens you use, but was consistently slow across the lenses we tested (including multiple high-end L lenses) — just to different degrees.

If you need a camera for any type of photography in which there are “decisive moments,” you’ll want to pass on this camera for now. Hopefully Canon can release a firmware update that provides a drastic speed boost, but until then your sport and street photography will be better captured with a faster-focusing camera.

One design choice that may be an annoyance to some people is that the AE Lock button is the left button of the main dial. This isn’t where your thumb naturally rests, making it nearly impossible to use the feature if you’re shooting with one hand using a heavy lens. You’ll need two hands on your camera to properly use this oft-used function. Another inconvenience is that there doesn’t appear to be a way to change the size of the autofocus point for more precise focusing. Instead of allowing you to shrink down the size of the AF box to target a tiny area of your frame, you’ll have to use manual focusing and Live View magnification. Having up to 10x magnification for manual focusing is nice, but it’s not as optimal at times as having a smaller AF point for autofocus.

The Canon EOS M is a camera that falls one big step short of being a fantastic mirrorless camera. If only it had an autofocus system as solid as its other specs and attributes, it’d be a camera that we’d recommend in a heartbeat to both serious photographers and casual consumers.

Unfortunately, its major flaw lies in a feature that’s absolutely critical for most photographers, so unless you know for a fact that you can live with a sluggish AF system, you’ll be better off waiting to see whether Canon’s next mirrorless camera — which is reportedly coming soon — has addressed this issue.

It’s a shame, really, since it’s extremely fun to use such a small and powerful camera on an existing set of Canon lenses.

A big thank you to BorrowLenses for providing us with the camera used for this review. Be sure to check them out for all your gear rental needs!

A Dazzling Time-Lapse of Stars, Meteors, and Auroras Dancing in the Sky