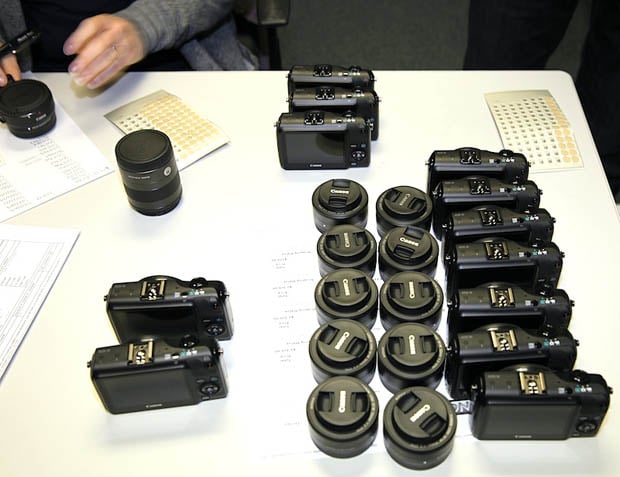 I am not a reviewer. I don’t even play one on TV. There are already some in-depth reviews out on the new Canon EOS-M, and more coming daily. But I handle a lot of equipment and test a lot of equipment. When something new comes in I spend a day handling it and testing it. Hopefully this will give you a quick overview of the camera, and perhaps fill in some things that actual reviewers don’t get to tell you about. We recently got a bunch of EOS M cameras, a bunch of the 22mm lenses, a couple of 18-55 kit lenses, and a single EOS M EF adapter.

I try to disclose my personal feelings first, so you can later use that to discount everything I say that you disagree with. It just makes it easier on both of us. I was predisposed not to liking the camera because it doesn’t have a viewfinder. I like viewfinders. If I can’t have a viewfinder, then at least give me an articulating LCD. This has neither. So on the front end I definitely was planning to not like this much.

However, I have to admit this is one small camera. Looking at the specs and pictures online I didn’t realize just how small it was. Comparing it to a bunch of other mirrorless cameras, though, gives a better idea.

Being a pessimist, my first thought was it’s too small to hold. I’ve got big hands and even those other cameras can be a bit difficult for me to hold. That was very true when I tried to hold it like an SLR. 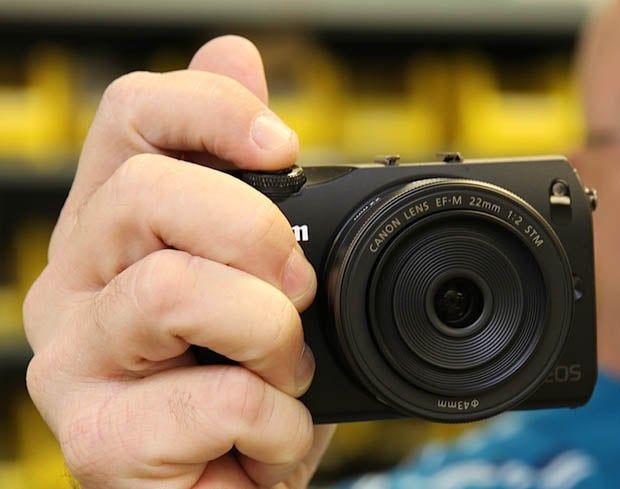 But not at all true if I just let my middle finger use the little rest thingie Canon put on there to hold the camera. It was actually quite comfortable this way. This does leave two fingers relatively unemployed, but that’s OK. I think going forward we should all refer to this grip as the “Roger grip technique” just to avoid any confusion. Anyway, I did find the camera quite comfortable, the LCD was nice quality, and the touch screen actually worked quite well. I usually turn the touch screen off first thing, but I kept this one on most of the time. I especially like the pinch-and-spread movements to enlarge and shrink images on the display. I’ve found myself doing that with other cameras that don’t have that feature, and it makes me feel stupid.

Overall, except for my wanting a viewfinder and articulated LCD, the camera is quite nice and remarkably small. So small that I’ll give them a pass on the no viewfinder thing. Not so much the LCD, that wouldn’t have made the camera any bigger, would have been very useful, and just isn’t that expensive to do. But I could literally put the EOS-M and 22mm lens in a jacket pocket.

The 22mm pancake lens that comes as a kit lens is really excellent. It’s totally silent when focusing. It’s exceedingly sharp in the center, and (for a pancake) still quite good on the edges even wide open at f/2.0. It gets just a little sharper at f/2.8, particularly in the corners, but really doesn’t improve much past that.

I was hoping it would be equivalent to the 40mm pancake lens Canon released for SLR cameras. Well, it’s at least that good and perhaps better. I have one concern, though. Of the first 20 copies that we received, two were clearly a bit softer than the others. This isn’t a very large sample, of course, but it’s something we’ll definitely watch going forward. On the other hand, even the two ‘bad’ copies were still fairly good. They would be as sharp as a 17-55 f/2.8 IS lens, for example. I may just be overly picky.

As to the 18-55 kit lens, I didn’t have a lot of samples to test, but it was shockingly sharp, too. Tested at 22mm (because that’s what we were set up at) and f/4 it was nearly as good as the 22mm prime was at f/2.0. That’s quite a good showing for the kit lens. I would mention, though, it has a breathtaking amount of barrel distortion at the wide end. Not quite a fisheye zoom, but you’ll notice it, no question.

My favorite part of today’s tests, though, weren’t the lenses. It was the EF-EOS-M adapter. No one has done adapters better. No one. We shot a variety of Canon EF lenses on it and they all were flawless. Autofocus like a dream, at least as fast as the native EOS-M lenses (more on that later), automatic vignetting control works perfectly, it was wonderful. Even some third-party lenses adapt rather nicely, like our new favorite Sigma. The EOS-M also looks quite nice on the 800 f/5.8 IS, and the touch-screen shutter-button feature is most convenient when handholding that combination. 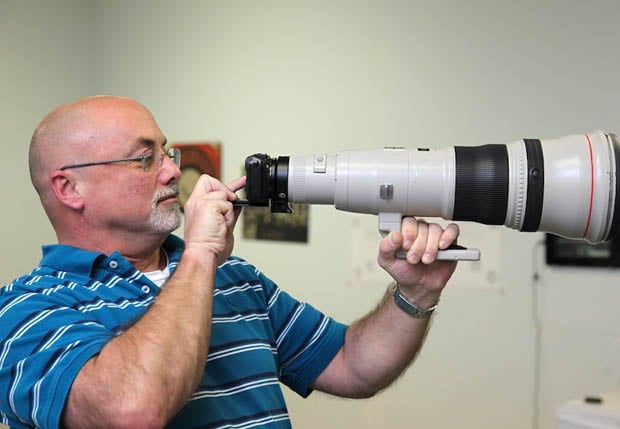 Does it work? Hell yeah, it works. The following are all shot with the EOS-M from the same place: 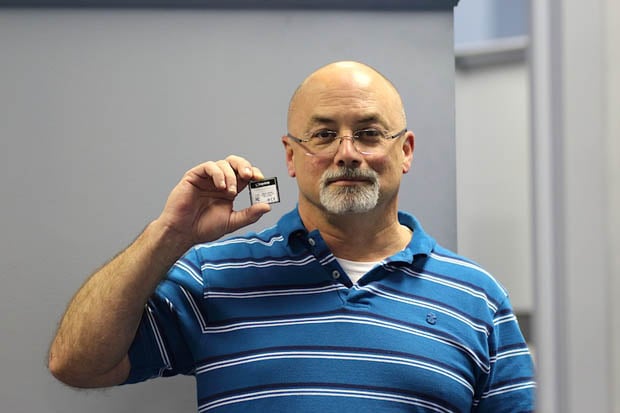 For those of you who don’t have a Sigma 200-500 and a Canon 800 f/5.6 lying around, there there are several really nice, small Canon EF lenses that will be quite useful on the EOS-M. The 40mm pancake, of course, looks quite natural. 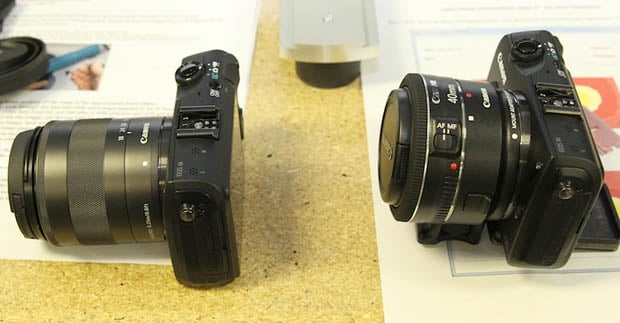 Even the 24-70 f/2.8 IS II isn’t too huge. Seen from the side, though, I do have more understanding about why there’s no viewfinder – some of these lenses would be blocking it.

About the Focus Speed

OK, all of this has been fun, the camera is tiny, and the lenses are great. But you’ve probably heard the autofocus speed is, how do I say this, total crap. You heard correctly.

We thought we’d compare it to what we consider a rather leisurely lens-camera contrast-detection AF combination: the Olympus OM-D (which is quite quick) mounted with the Panasonic 20mm f/1.7 (which isn’t). We chose that combination because m4/3 shooters tend to find it acceptably fast, but only just acceptably.

We did a simple test: we focused the OM-D and the Canon EOS-M to minimum focusing distance, aimed at a good infinity distance target, and pushed the focus buttons simultaneously. We could hear the focus-confirm beeps quite clearly and thought we’d be able to notice a significant separation. Oh, boy, did we ever. The Canon took almost exactly twice as long as the Olympus to focus. We tried it the other way, too, from infinity to close up. Same result. Exactly twice as long.

One important thing to note, though. This seems more about the lens than the camera. When we did the same test with the 18-55 kit lens on the camera it was basically a tie with the Olympus, or just a bit longer, but very close (there was a little variation with focal length).

However, it’s not just about the lens. We did the same thing using the Canon 24-70 Mk II. On a 5D II it focused in a heartbeat. On the EOS-M with adapter, it was again, about as fast as the Olympus. It also was very apparent the lens travelled to infinity quickly, then there was a bit of hesitation while the camera confirmed focus. The Olympus confirmed just ahead of the 24-70 on EOS-M.

Is it an issue? Absolutely. The camera obtains focus quite accurately. It will be fine for landscapes, portraits, etc. You aren’t going to do any street shooting with it, and certainly nothing moving faster than a turtle race. The camera includes a Servo mode. I have no idea why.

So if you were thinking about the EOS-M as an SLR replacement or even an alternative to high end mirrorless for all-purpose shooting, then you’ll be disappointed. As a go everywhere camera to take stills and portraits, you’ll be quite happy.

As an aside, because I tend to a rather high degree of cynicism and paranoia, I had a thought I’m sure many of you would never consider: could Canon possibly have made the AF this slow on purpose, making sure no one who might by an SLR would instead grab and EOS-M? I know, I know, I need to get back on my medicine. What company would ever willfully disable a camera’s features?

But to humor myself, I went and grabbed a T4i and a couple of prime lenses and did the same test with the Olympus. Paranoia off now, the T4i using Live View contrast detection was exactly as slow as the EOS-M. If you want to see how slow the EOS-M is, just borrow a T4i and the 40mm pancake, 24 f/2.8 IS or similar lens. Hit the Live View button, focus on your hand and then to infinity.

There you have it, my second great invention of the day: Roger’s EOS-M AF speed simulator. If you can live with that, you’re all good to pick up an EOS-M. Actually, all sarcasm and cynicism aside, that’s a pretty reasonable test to do. Because some people are going to be just fine with the EOS-M AF speed, and some are going to scream like schoolgirls at a Justin Bieber concert about it.

Oddly enough, I do. I’m all about image quality above all other things. This camera gives me great, great image quality in an amazingly small package.

Will it replace an OM-D or SLR for my everyday shooting? Absolutly not: its AF is too slow and there aren’t many native lenses yet. But will I tuck it in my wife’s purse when we go to holiday parties, and take it on trips for snapshots? Sure. Sometimes those kind of shots are great and with this image quality I could easily make a large print if I wanted to.

If they fix the AF speed with a firmware update I would probably use it a lot more, though, because of all the Canon lenses it gives me access to. I love the adapter. I could see having an EOS-M, 22mm, and the adapter as my backup camera a lot of times.

When I tested the Fuji X-Pro1 in the past, I concluded that it was a firmware update and a price drop away from being a great camera. I think the summary applies perfectly for this camera, too.