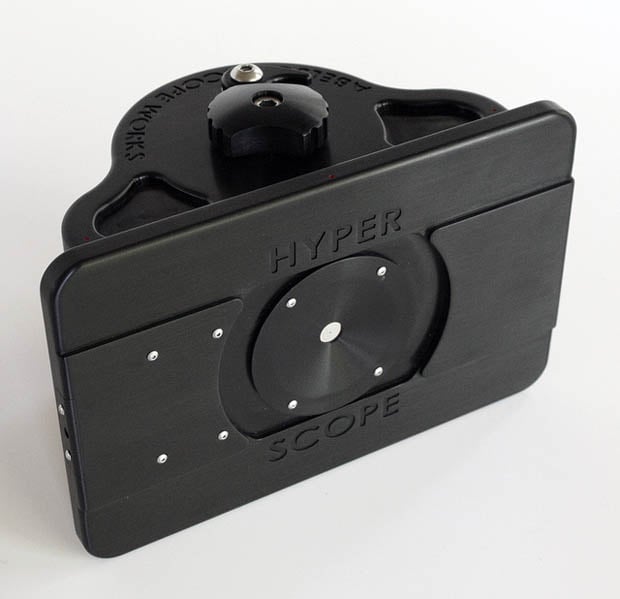 In the Star Wars universe, Lightsabers are hand-built as part of their wielders’ training, and each one is as unique as the person who made it. Photographer Matt Abelson seems to have the same idea about cameras: he builds high-quality one-of-a-kind pinhole cameras based on his own designs.

The Hyperscope (shown above) is one of his creations. It’s a cylindrical can camera that takes medium-format roll film, and is crafted out of chunks of aluminum.


Each roll of 120 film produces four 6x17cm panoramic photographs; the film is wrapped around inside the camera in ~300-degrees, giving each photo a ~150-degree angle of view.

The shutter is triggered by a cable release that mounts to the side of the camera. The knob in the center of the top plate advances the film. The tiny lever next to it is an anti-buckling mechanism. 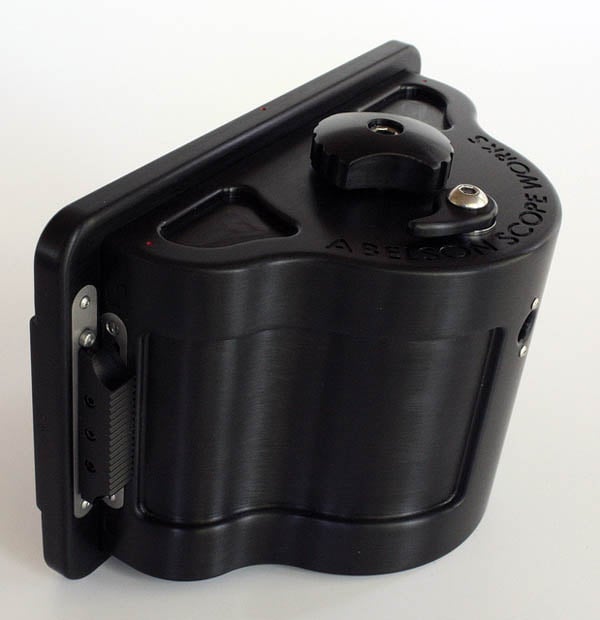 To open up the back of the camera, one must depress a small button and push a thumb slider — the door is double-locked in order to prevent it from being accidentally opened. Check out the guts of the camera — the film holder actually pivots out to make loading the rolls a breeze: 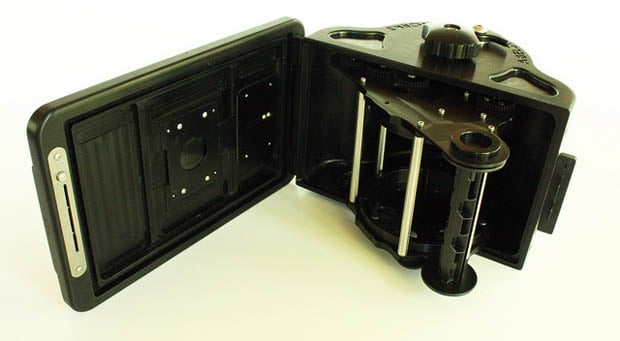 Here’s a video of the camera’s shutter assembly in action:

We asked Abelson about the story behind the camera. Here was his response:

I was first attracted to pinhole cameras through the cylindrical pinhole camera images of Walter Crump. My first cameras were large cylinders that took 16×20 paper negatives. I never was able to get consistant exposure results. I moved on to cylindrical cameras that used 5×7 sheet film. I was able to get much more consistant results with these cameras that encouraged me to take lots of pictures. Because the cameras were made out of cardboard tubes I ran into lots of dust problems when the cardboard would start to flake off in small bits. This led me to start building all metal cameras.

When I first started building metal cameras my design and machining skills were not at a level that would have supported trying to build the Hyperscope (the roll film version of a cylindrical pinhole camera). Over time my skill set improved and the initial design percolated over a number of years. I finally got around to firming things up about 3 years ago. The design was done in a 3D engineering design software called Solidworks.

The hardest part of most pinhole cameras is the film transport mechanism. This was especially true of the Hyperscope. I prototyped the film cassette to see if my initial design would work. It failed with the film buckling badly. I went through 4 or 5 designs over the next year or so trying to get the film path worked out. The final design utilizes an arm that pivots down to keep the film from buckling during loading and unloading. During picture taking the arm pivots out of the image path. The final camera uses 120 film and produces four 6×17 per roll of film. The camera has a horizontal angle of view of close to 160-degrees.

Here are a couple of sample photographs shot using the Hyperscope (click them to enlarge):

Pretty neat huh? No word on whether Abelson is currently accepting new Padawans.

Image credits: Photographs by Matt Abelson and used with permission