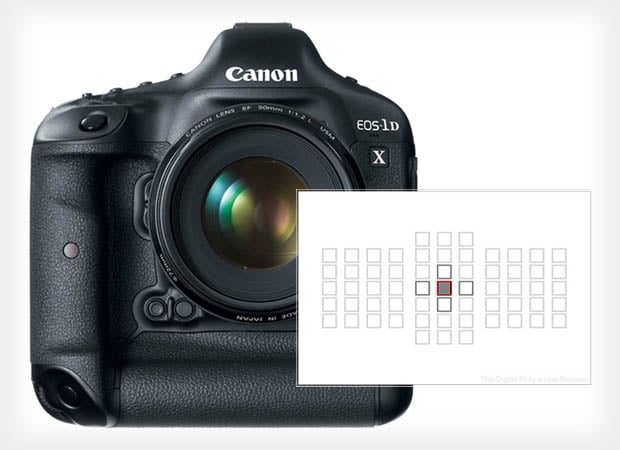 Ever since the Canon 1D X and 5D Mark III were released, photographers have been complaining about sometimes not being able to see the black AF points in the new 61-point system. In July we wrote that Canon was reportedly working on a fix. It now looks like the fix may soon be upon us, in the form of a firmware update.

A press release announcing the new firmware appeared briefly on Canon’s website today but was quickly taken down once the news started getting around. The release mentioned two impending upgrades to the 1D X: red AF point illumination and cross-type autofocusing at f/8.

The new AF illumination will aid photographers shooting in dim lighting by illuminating AF points in the viewfinder in red when the shutter button is pressed halfway while in AI Servo mode. To avoid getting in the way of the metering system, the illumination will be “intermittent” rather than continuous. Photographers will also be able to toggle this setting in their menu system… just in case you’ve grown fond of the black AF points.

The 1D X will also be able to take advantage of its 41 cross-type AF points at apertures as small as f/8, up (or down?) from f/5.6. As we reported a year ago, the old limit caused certain telephoto lenses to lose autofocus when teleconverters were attached, causing frustration for photographers that need both long reach and autofocus (bird photographers, for example).

The firmware should be announced “for real” within the next week or two. No word yet on whether these changes will also be rolled out for the Canon 5D Mark III, but you can bet many photographers will be begging to see it happen.

Update: The firmware update has now been released. You can find in-depth information, visual examples, and a download link over on this dedicated page.

BuzzFeed Sued for $1.3M After Publishing 9 Celebrity Photos Without Permission