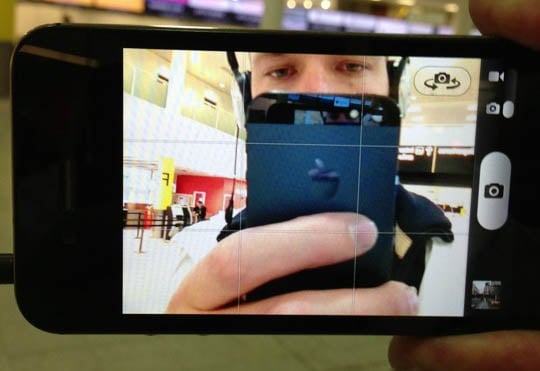 An update on the iPhone 5 and “Purplegate“: DPReview has published a pretty in-depth review of the iPhone 5 as a camera — a review that has 1 of the 5 pages dedicated to examining the purple haze issue that has been widely discussed in recent days.

The most likely cause of the iPhone 5’s purple haze is probably lens flare and internal reflections in the camera lens assembly. All lenses are succeptable to lens flare to some degree, and as you can see from the images at the top of this page, the iPhone 4S isn’t immune either (ditto the iPhone 4 and competitive smartphones from other manufacturers).

But in our shooting we’ve found that it’s a little more noticeable on the iPhone 5. So why is that? It’s unlikely that the flare is solely due to the much-vaunted inclusion of a sapphire glass lens cover (although the refractive index of the sapphire glass is different to conventional optical glass, so it could be a contributing factor). Our money is on it being caused by a combination of different things, none of which, alone, is unique to the iPhone 5.

[…] our advice is not to worry. Just do what you should do anyway, and avoid putting bright lights near the edge of the frame when shooting.

That makes sense, but their conclusion slightly misses the point of all the grumbling, which is: “why is it it so purple?” Lens flare is something photographers can live with. In fact, sometimes it’s desirable depending on what kind of photograph you’re trying to take. It’s the purple-ness of this flare that isn’t.

If the flare outdoors looked more like sunlight and less like something intended for a Jimmy Hendrix album cover, this probably wouldn’t be much of an issue.

We received an interesting email yesterday from a reader named Scott. He writes,

Regarding the purple flare reports wanted to share what I found to get the word out. Turns out that if you hold a clear UV filter like people use as lens covers on cameras, the flare is gone — or, perhaps more accurately, reduced to a normal level like on the 4S. Still unknown if this was a batch that did not get coated or all of them. My guess says batch though because of the number of people who just think we are complaining about normal lens flare. And frankly that makes it very hard to tell Apple convincingly that something is wrong.

Here are a couple of before-and-after example shots he sent us, with a normal photo on the left and a Tiffen UV filtered photo on the right: 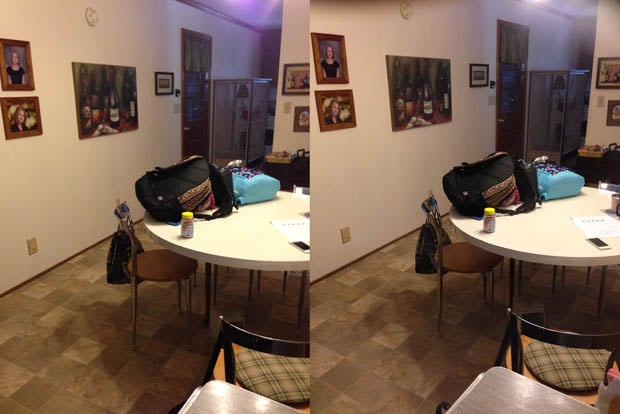 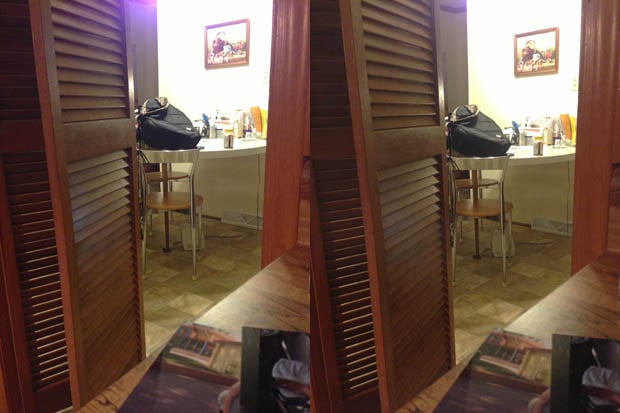 For some reason, the filter seems to kill the purple-ness. It’s strange, because UV filters are used to kill bluish haze, while the color seen in the iPhone 5 flare looks like it’s more on the infrared side of the spectrum.

Scott’s test obviously isn’t thorough or scientific, so we’re not coming to any conclusions based on it, but it’d be interesting to see more exploration into what exactly is causing the purple color.

Aside from this issue — which many people don’t have a problem with — DPReview’s conclusions regarding this camera are very positive:

The iPhone 5 is a fine mobile device, with an excellent camera. In qualititative terms it’s not the best camera out there, and nor is it the best camera on a smartphone (the Nokia 808 has that honor, for now) but it offers satisfying image quality, some neat functions like auto panorama and HDR mode, and – crucially – it is supremely easy to use. It isn’t much better than the iPhone 4S, as far as its photographic performance is concerned, but it isn’t any worse (notwithstanding a somewhat more noticeable propensity towards lens flare). When manufacturers employ pixel-binning to achieve higher ISO settings we don’t normally celebrate the fact, but in the case of the iPhone 5, it gives you greater flexibility in poor light (i.e., you might actually get a picture now, where you just wouldn’t with the iPhone 4S) and the drop in quality is unnoticeable when the images are used for sharing/web display.