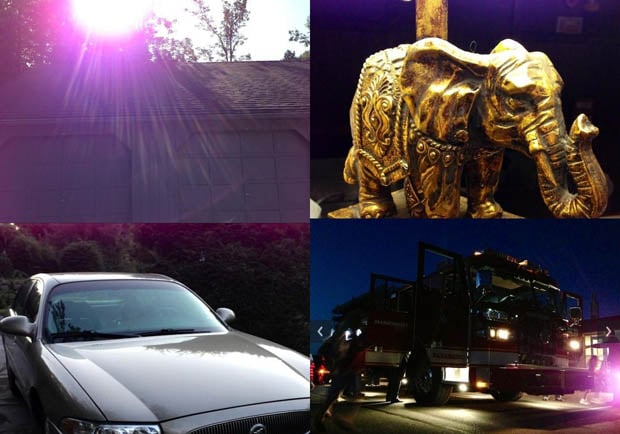 If you were thinking about buying the iPhone 5 as your primary carry-around camera, you might want to hold off on that. Reports are emerging that the camera suffers from purple flares when bright light sources are in or around the frame. Cult of Mac reports that iPhone 5 owners are taking to online forums to express their displeasure with this issue.

In a comment over on Cult of Mac, reader Michael Harris writes,

It’s not the lens, Apple eliminated the IR cut filter and in some cases that causes some shades of black to be purple. They did it for cost or thinness. Leica did it with their first digital rangefinder camera and it had the same effect. It can’t be fixed with software, Leica had to actually send IR filters to people who purchased the camera. Unfortunately you can’t put a screw-on filter to a cell phone.

What he’s referring to is the Leica M8. When it was launched back in 2006, there was a huge hoopla over the fact that blacks were appearing as purples. Photographers found the issue unacceptable, especially on a camera that costs thousands and thousands of dollars. Leica eventually began sending out two free ultraviolet and infrared screw-on filters to M8 owners in order to remedy the problem.

Another theory floating around is that the flare is caused by the new Sapphire lens used in the camera. Apparently the special new uber-durable lenses come in a variety of colors, and the purple one might be causing this issue.

From what we can tell, it seems more like a lens issue than an IR filter issue, since the Leica M8 problem was quite different (it wasn’t just happening under strong light sources and the resulting photos had blacks that were completely shifted toward purple).

If the iPhone 5 does in fact have a problem that cannot be corrected with a simple firmware fix, then Apple may have a PR nightmare on its hands — especially given how much they tout the camera quality of the iPhone. Is this purple flaring the new Antennagate for the iPhone 5?

Update: Matthew Panzarino over at The Next Web argues that this purple haze isn’t a problem unique to the iPhone 5. (Thanks Jonas)