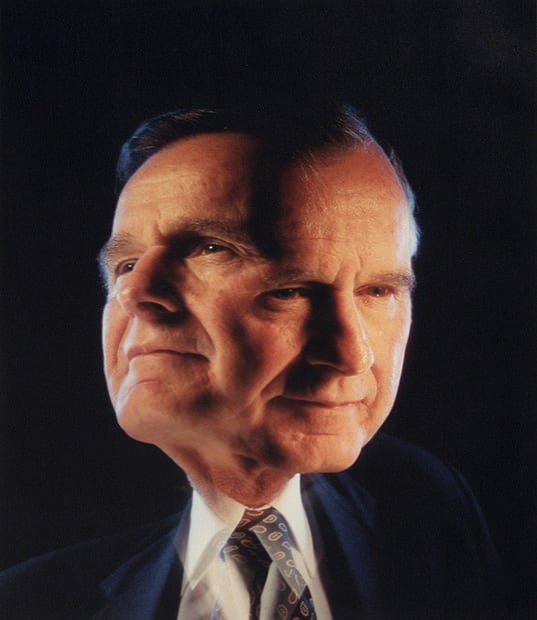 American portrait photographer Gregory Heisler (whom we featured yesterday) is probably best known for his 70+ cover portrait photos for TIME magazine. One of his most famous portraits shows a double exposure, “two faced” photo of President George H.W. Bush. The photograph, shot entirely in-camera, was used as the first TIME “Person of the Year” cover photo.

As this 1990 Man of the Year cover image by photographer Greg Heisler was meant to indicate, its subject, George Bush, had won his plural “Men of the Year” designation for two disparate reasons-one positive and the other negative. On the plus side, as Time pointed out, he had clearly proven himself a master of foreign policy, and in the wake of his skillful orchestration of the ultimately successful multinational coalition opposing Iraq’s invasion of Kuwait, he had earned much admiration both at home and abroad. But in contrast to his decisiveness in the international arena, his domestic policies were, in Time’s estimation, “hollow at the center” and reflected no serious agenda.

The White House had no idea that President Bush was going to be portrayed in that way, and both TIME and Heisler had their White House press privileges temporarily revoked. 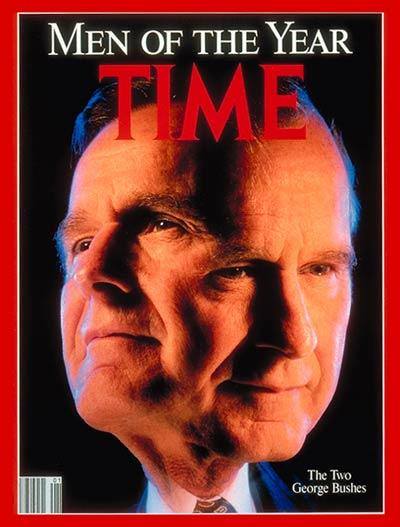 A few years later, in 1995, Bush’s press secretary Marlin Fitzwater gave an interview with Brian Lamb of C-SPAN in which he described how the photo shoot went down from the White House’s perspective:

Lamb: If you go to the National Portrait Gallery and look at the Time magazine covers of men and man and persons of the year, in the political section, there’s one of President Bush with two faces.
Fitzwater: Right.
Lamb: You write about that.
Fitzwater: Yes. I write about it because the President — the press holds a Press Secretary and a President to some pretty high standards, I think. And I think it’s good that they do. I mean, I firmly believe we should not try to lower press standards — rather, we should raise standards for the Presidency and the people who’re in it. But by the same token, I think the press have to understand they can be held to some high standards also, and they don’t always tell the truth. And one of the cases where they didn’t tell the truth to me was on the Man of the Year cover for Time magazine, because they wanted an interview with the President. They knew damn well we wouldn’t grant one with the President if we knew that this was going to be a mocking cover that showed him to be a two-faced politician — which is what they had in mind. And so I was really resentful of the idea that we were duped into granting an interview and granting a photo session which was used for those purposes.
Lamb: How’d they do it?
Fitzwater: They lied. They told me …
Lamb: I mean, how did they set it up so that when we — you talk in here about how something was strange about the photo session.
Fitzwater: Well, yes. They brought in a photographer from New York who was well-known for class photography and fashion photography and so forth, but not a news photographer.
Lamb: Do you remember the name?
Fitzwater: I don’t — it’s in the book, but I — frankly, I don’t remember it at the moment. And …
Lamb: It’s Gregory Heisler.
Fitzwater: Gregory Heisler — yes. And he had these shots all set up in the morning, and he had marked on the floors diagrams of exactly where the camera was going to be, exactly where he wanted the President, exactly what angle his face would be and his shoulders and so forth. And I looked at it, and I thought, “Well, that just means the guy is well-prepared and that he’s a pro, and he knows what he’s doing, and he’s really got this planned out down to the last i’ and t’,” but then, when I saw the pictures being taken, I began to be suspicious because they wanted a profile of the President in one area, and then they asked him to turn and his face had to be just at the exact same height as it was in the other profile. And I began to suspect then that something was wrong.
Lamb: You quoted yourself as saying, “`Those bastards!’ I screamed. They lied to me. This whole thing was a setup. Those dirty, rotten bastards.'”
Fitzwater: That’s a fair and accurate …

The White House’s ban didn’t last for long: shortly afterward, Heisler’s trade group protested it due to the fact that it was simply due to editorial opinion. Both TIME and Heisler soon had their privileges reinstated, and the photographer has since photographed other US Presidents.

The Beauty and Power of Dance Captured in Photos Using Powder