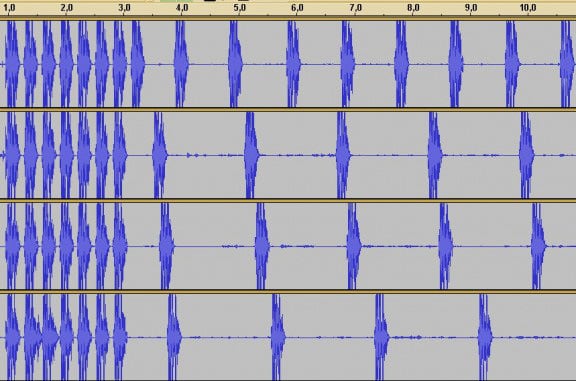 Needing a way to test the speed of memory cards, Jaroslav of Crazy Lab realized that camera shutter sounds can do the trick. By recording the sound of his Canon 600D snapping away in continuous burst mode and then viewing them audio file, he was able to visualize the card’s speed and compare them against each other. He also learned some things about burst speed and ISO/format:

As you can see, the burst length is getting shorter with rising ISO. The time camera needs to write the buffer to the card is also significantly grown. The reason is the noise. On higher ISO settings we getting more noise in picture and noisy pictures are not good for compression. The RAW-File size (black picture shouted with closed lens cap) varies from 19MB @ ISO100 to 32MB @ ISO12800.

Also interesting is the comparsion of burst speed shooting in RAW versus JPEG. While the burst length with JPEG files is virtually infinite (with fast sd-card), the burst speed is slightly lower.

You don’t need anything fancy to do this experiement: Jaroslav used a webcam mic and the free audio program Audacity.

The Weird World of Slit-Scan Video