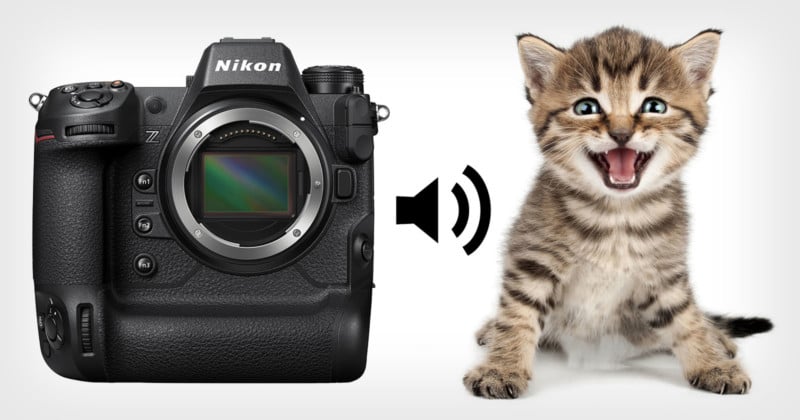 The Nikon Z9 uses a purely electronic shutter, meaning the camera shoots completely silently and that any shutter sound you hear is an artificial audio file. Nikon has developed a beta firmware and teased the possibility of custom shutter sounds, including a cat’s meow.


Nikon made a presentation on February 25th, at the 2022 CP+ camera and video equipment trade show in Japan, and a recording of the event has been shared on the camera company’s official YouTube channel.

At about 1 hour and 35 minutes into the presentation, a moment first spotted by Nikon Rumors, Nikon showed off a beta firmware it developed for custom shutter sounds in the Z9 flagship mirrorless camera.

When one of the two presenters picks up the Nikon Z9 in front of him and presses the shutter button, the camera meows like a cat. When holding down the shutter, the camera does a rapid series of meows as the camera captures a burst of photos.

A New World of Possibilities

Other shutter sounds demonstrated in the presentation include the shutter of the Nikon D750 DSLR, the Nikon F4 film SLR, and the presenter’s voice recorded with a microphone.

For photographers who enjoy a little randomness to their photography, the camera can even pick a random shutter sound from its collection with every new photo.

While many photographers find having a completely silent shutter useful in their lines of work–in shooting press conferences or quiet live performances, for example–having the ability to choose custom shutter sounds could be useful for other photographers working in other fields.

There is no word yet on if or when this unusual custom shutter sound feature may make its way into the Z9 and other Nikon mirrorless cameras. Nikon says it is considering releasing a firmware update to roll it out to its cameras sometime in the future.