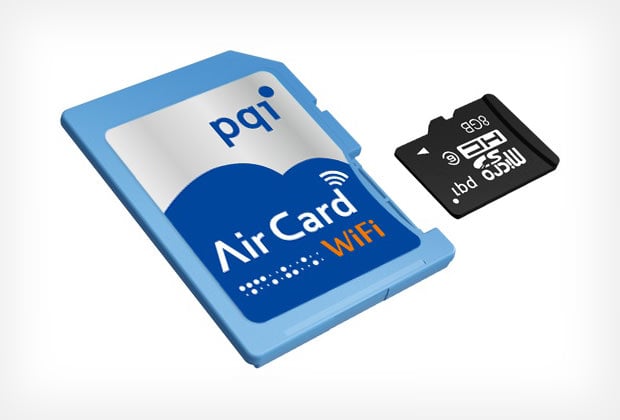 Eye-Fi cards have seen their fair share of competition, but a new product from memory manufacturer PQI could pose a bigger threat than they’re used to. The Air Card, as PQI are calling it, made its debut at Computex 2012 and, for the most part, offers exactly what we’d expect from a WiFi memory card: it creates its own WiFi hotspot when the camera is turned on, at which point photos appear automatically on whatever tablet, phone or PC you happen to have connected. The card can even connect to three sources at once, although this will slow down the transfer rate quite a bit. One specific feature, however, makes the Air Card stand out.

The feature that differentiates it from other WiFi memory cards on the market is the fact that no actual memory is built into the Air Card itself. Instead it has a slot into which you can insert a microSD card of your choice. If you’re someone who fills up cards quickly, that means you won’t have to buy a bunch of very expensive EyeFi cards, just one shell and as many relatively cheap microSD cards as your heart desires.

PQI have yet to set a definitive price, but with the price difference between an 8GB EyeFi card ($50+ on Amazon) and 32GB microSD (~$20 on Amazon) they would really have to go overboard take away price appeal. Manufacturing is set to start next month, at which point we hope PQI will announce a specific release date a price point.

Portraits of Kids Before and After Tooth Surgery

What’s the F-number of the Human Eye?