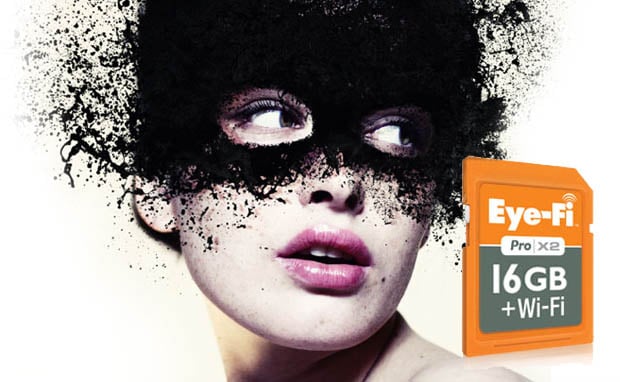 Eye-Fi, a pioneer in the Wi-Fi-enabled memory card market, has announced a new flagship SD memory card. The new Pro X2 doubles the capacity of the old one, from 8GB to 16GB, and increases the speed as well, from Class 6 to Class 10.

According to the speed class definitions set forth by the SD Association, Class 6 is for cards with a minimum transfer speed of 6 MB/sec and that are geared towards Full HD recording. Class 10 ups the minimum transfer speed to 10 MB/sec, and is good for both HD video recording and quickly shooting a large number of high-res photographs in burst mode.

Cameras have more megapixels, and pictures and videos are more demanding in terms of size. Moving to a 16GB, Class 10 card keeps up with these trends and delivers what our customers have been asking for. Customers already know and love our Eye-Fi cards for instant wireless uploads, so the added space and faster speeds are a great addition, especially with the highest-volume photo days coming up.

In case you’re unfamiliar with what Eye-Fi does: the company’s Pro X2 card allow photographers to instantly transfer photos (including RAW files) to other devices (e.g. computers, tablets, phones), shoot in endless memory mode by constantly freeing up space when photos are transferred, share photos in real-time on social networks and photo sharing sites, and geotag photos using Wi-Fi-based geotagging.

Despite the gains in capacity and performance, the price tag on the flagship card remains unchanged. It’s still priced at $100 — you can pre-order the card on Amazon — while the prices of the old Eye-Fi Pro X2 8GB and Eye-Fi Mobile X2 8GB cards will be dropped $20 from $100 and $80 to $80 and $60, respectively.