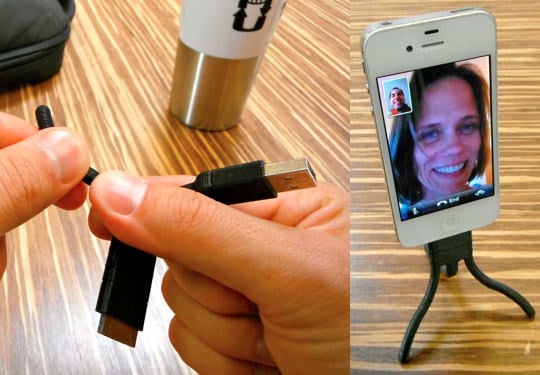 Here’s an interesting product idea by Oregon-based designer Jason Hilbourne that combines a charging cable and a mini-tripod into an easy-to-use, pocket-sized device. His project, dubbed Twig, is specific to the iPhone and has already gotten quite a bit of attention. With 56 days to go the Twig has already secured $64,000 in funding — putting it a whopping $14,000 past its goal. But more-so than its iPhone functionality, for us the intriguing thing is to see if anyone takes this idea and runs with it, creating similar products for compact cameras.

Mini tripods are useful enough as is, but combine them with the USB sync (and sometimes charge) cable that always seems to get lost somewhere, and you have a product a lot of people would go for — a fact that has already been proven by how many people are supporting Twig over on its Kickstarter page.

If you’re interested in getting one yourself there’s still 1,400+ early bird specials left that’ll snag you a twig for only $18.

Twig: the amazing ultra-portable cable for your iPhone (via iPhoneography)