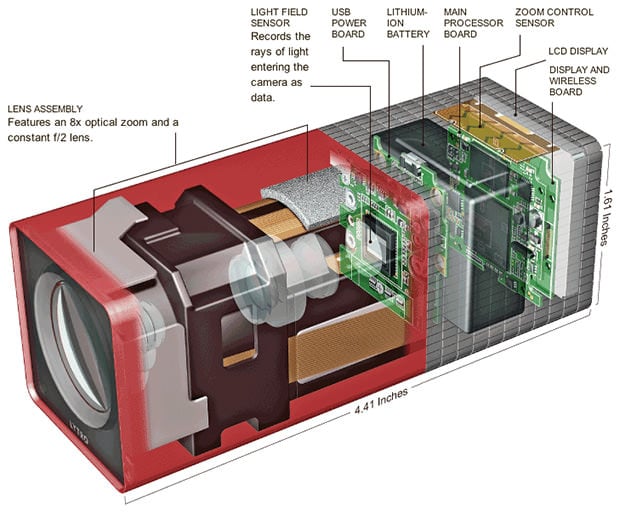 Lytro‘s groundbreaking light field camera is finally landing in the hands of customers, and to give people a better idea of how the camera works, the New York Times has published an interesting diagram that shows what makes the camera tick. Here’s what DPreview has to say about the camera:

The Lytro LFC is so unlike any conventional camera that it doesn’t make sense to score it in comparison to them. Ultimately, though, we’re not convinced that the Lytro either solves any existing problem or presents any compelling raison d’etre of its own. If it were higher resolution or allowed greater separation or could produce single lens 3D video it might generate a lot more excitement. As it is, it feels like a product arriving before the underlying technology is really ready.

All of which is a great shame, because Lytro has done a great job of making a credible consumer product out of a piece of fairly abstract scientific research. It’s quite possible that in the hands of the right people it will result in some interesting creations but we just don’t yet see it as a mass-market device.

The New York Times came to the same conclusion — that the technology is revolutionary, but the product isn’t game-changing… yet.

A Review of the Lytro Camera (via Photojojo)