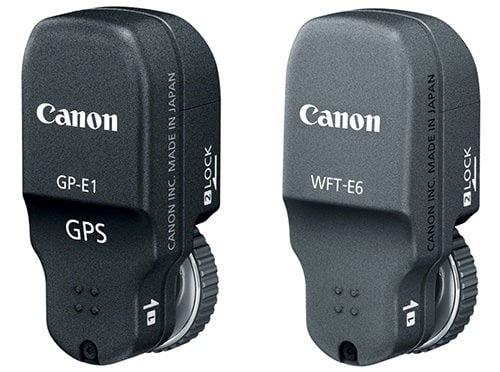 Remember the network and Wi-Fi icons in the Canon patent we shared yesterday? Well, they both appeared today in the Canon 1D X announcement, but only one of them is built in. The new DSLR offers a built-in gigabit Ethernet jack for ultra-fast data transfers, but wireless transfers will require an additional add-on: the WFT-E6A Wireless File Transmitter. It’s designed exclusively for the new camera, and supports Bluetooth in addition to Wi-Fi. Priced at $600, it costs as much as an entry level DSLR.

There will also be a Canon GP-E1 GPS Receiver add-on for logging location data and camera direction. It’ll have a retail price of $300 when it’s released alongside the camera in March 2012.

In other news, Canon has passed the 70 million mark for EF lenses produced, while Nikon has just produced its 65 millionth SLR lens.

Eyes Are Amazing: A Slow Motion Look at Our Biological Lens