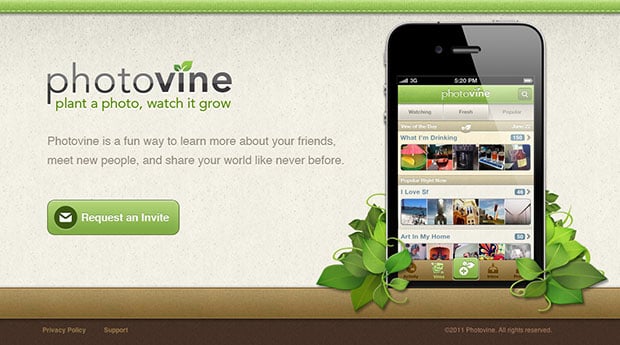 If you’re not convinced that Google is jumping into the photo-sharing pool head first, get this: the company has not one, but two stealthy photo sharing apps in private beta. Besides the Pool Party app that came to light at the beginning of the month, the rumored Photovine service has now materialized into a website — well, a landing page, at least.


Details about what the app does are sparse. Here’s some text that appeared on the “Support” page but has since been removed:

In Photovine, vines connect you with people through the ideas and themes expressed in your photos.

A vine is like a constantly growing family of photos connected through a common caption created by you, your friends, and people all over the world.

Some examples of vines could be: “What Weekends Are Made Of”, “Secret Stuffed Animal”, “Party People”, or, “Love of My Life”.

As people add photos to vines, they tell their own stories about the moments, images, and ideas that define our lives in a way that’s social, creative, and fun.

Start a vine by taking a photo and creating a new caption, or add to an existing vine. Other people will see your vine and join in by adding their own photo, showing their own take on the caption.

So, unlike Pool Party, which allows you to collaborate on group photo albums with people you know, Photovine appears to be geared towards discovery and interacting with strangers who share similar interests.

Here’s a comparison of screenshots that have been released for the two apps: Both apps are being built by Slide, the Web 2.0 company that Google acquired in August 2010.

Photovine (via TNW via VentureBeat)

Update: Business Insider has a full version of what the FAQ contained before it was removed.