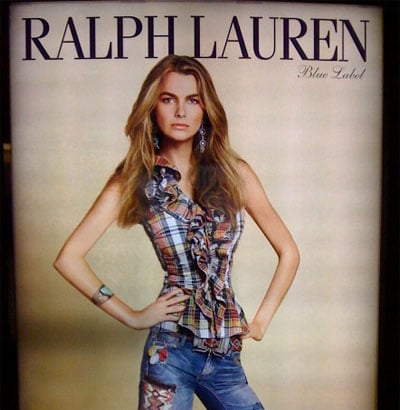 It’s estimated that 8 million people in the US struggle with an eating disorder, with 95% of them between the ages of 12 and 25, and one of the big reasons may be the aberrant use of Photoshop by the ad industry. The American Health Organization updated its policies earlier this week urging the ad industry to stop the “altering of photographs in a manner that could promote unrealistic expectations of appropriate body image.” Board member Barbara L. McAneny states,

The appearance of advertisements with extremely altered models can create unrealistic expectations of appropriate body image. In one image, a model’s waist was slimmed so severely, her head appeared to be wider than her waist. We must stop exposing impressionable children and teenagers to advertisements portraying models with body types only attainable with the help of photo editing software.

The image she’s referring to is the Ralph Lauren ad shown above, which caused quite a bit of controversy back in 2009. It would be great to see the stigma of image manipulation in the world of photojournalism spread over into the ad industry, at least when it comes to body image.