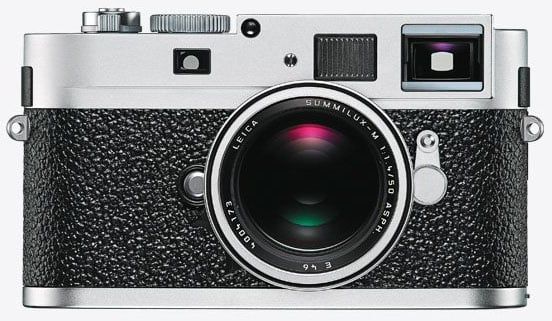 Turns out that mysterious Leica camera spotted on British singer Seal was in fact a Leica that didn’t officially exist yet, but now it does: Leica has just announced the M9-P digital rangefinder. The new camera is basically the M9 with a few cosmetic changes — all the guts are identical. Like on the non-digital Leica MP, the traditional red dot is missing from the M9-P, which meant to give the camera an “understated appearance”.

There’s also a special sapphire crystal covering on the LCD screen that’s so tough that “the screen can only be produced using special diamond cutting tools and is one of the world’s hardest materials”. Too bad LCD screens aren’t all made of this scratch-resistant and almost unbreakable material — I’m sure a ton of iPhone users would pay extra for it.

Here are a couple promo videos for the camera:

Same as the M9, with the sapphire screen Leica removed from the M8 when it introduced the M9 in order to give themselves this upgrade path as we predicted them to do back in 2009 when they cheated us out of the sapphire that the M8 had.

Leica is getting like the Japanese: two steps forward (full-frame and no IR filters needed), and one step back for future upgrades (remove the sapphire cover in 2009 so they can add it in 2011 and claim something new).

Baskets of Color at a Supermarket

Photos That Spent Four Years in the Ocean Reunited with Owner