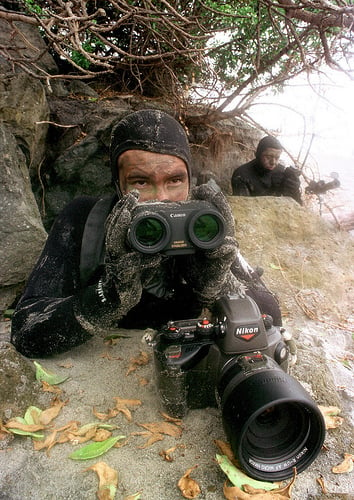 In 1998, this US Navy photo was published, showing a Nikonos camera no one recognized from the IPTC caption:

The enigmatic photo and description sparked much interest — this is a digital SLR that requires no underwater casing, and was far advanced for its time with its built-in tracking, real-time uploading, GPS, and communications. The underwater film Nikonos RS camera existed on the market already, but this futuristic iteration was unheard of in 1998.

What’s more, Kodak denied existence of the camera altogether. When Jarle Aasland of NikonWeb did some research into the matter in 2005, Kodak told him:

“I’m sorry but those cameras never existed here at Eastman Kodak. We never made cameras for that specific use. The information you have is incorrect.”

Another Kodak source told him:

“I think the issue is who they were made for.”

After further investigation into the mythical camera, Aasland finally found photos of the camera listed on eBay, hard evidence of the cameras existence. He published a story on his findings.

Days after Aasland published his article, he was contacted by Kodak’s lead engineer for the DCS cameras, Jim McGarvey. As it turns out, the camera was not quite top secret, but it was so low-profile that few knew about it, including Kodak Professional, McGarvey said. Quite simply, the specialized cameras were not advertised on a consumer level, since they were designed for government use, McGarvey wrote:

“The Nikonos body cameras were made by Kodak’s Commercial & Government Systems division. Through most of the DCS years, that group would take our commercial camera designs and adapt them for government and other special needs. Some of that work was secret, but most of the products were simply only marketed in limited venues and didn’t appear on the commer[c]ical photography radar screens. I don’t think the Nikonos cameras were ever actually secret.

…I have no idea how many Nikonos units were built, but I doubt the total would be over 100. They had no super secret special communications stuff, just standard DCS420 features.”

While it’s still highly unlikely that we’ll see such a formidable does-it-all camera on the mainstream market anytime soon, it’s pretty fascinating to see how today’s consumer products are taking a step in that direction. Some 12 years after the legendary digital Nikonos, we’ve got cameras equipped with GPS, wi-fi enabled cards for real-time uploading, and a plethora of hardy, underwater point-and-shoots on the market.