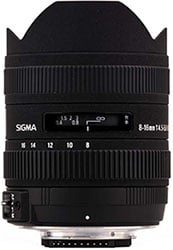 While it’s not an accurate measure of what the lens will cost in the US, at the current exchange rate this is roughly $1,232.

The lens, designed for APS-C (crop) sensors, will be available for Sigma, Nikon, and Canon mounts when the lens is made available at the end of April. It will also be released for Sony and Pentax shortly thereafter.

When used on APS-C sensors, the lens is equivalent to a 12-24mm lens, and is the first zoom lens to offer 8mm without being a fisheye.