Ben Cooper is a freelance photographer who works with the NASA imaging team. In addition to having his work published by NASA, he has been featured by publications such as Yahoo! News, Time magazine online, and the New York Times online. You can visit his website here. PetaPixel: Can you tell me a little about yourself, your background, and what you do?

Ben Cooper: Well, I’m from NYC and have been taking pictures since I was a kid. My taught dad me, he was a photographer. I started getting interested in the space program and following shuttle and rocket missions sometime around 1998 and decided I had to go see one in person. So naturally, combining photography and space became my thing and I haven’t looked back. Finally, after three tries, saw my first shuttle launch in 2001 and then decided to attend school in Florida at Embry-Riddle Aeronautical University studying engineering. Since August 2003 I have shot almost every launch out of Florida, and soon enough began garnering interest from some media organizations.

I love shooting what I do also because there is only one shot at it, no do overs with launches and other one-time space events that we have. A lot of pre-planning has to go into it, as opposed to less often spur of the moment type captures though we certainly have them.

Shooting launches in particular requires skill – and access, as media or otherwise – that not everyone can attain, and the main different is how you shoot launches up close when no one is allowed closer than several miles from the shuttle or rocket that’s launching. You have to keep in mind we are talking about sticks of dynamite as tall as 15-20 story buildings packing a tremendous amount of power, sound and heat with them when they lift off. So, we set up cameras 12-24 hours beforehand at the launch pads and leave them there, protected from weather and, hopefully, from the launch. And while you’re setting up you deal with alligators, snakes, spiders and swampland. Not to mention the mosquitoes.

Although we cannot get too close on the space shuttle, we can on rockets and I’ve lost a couple of lenses getting shots that are seemingly “right under” the rocket.

The remote cameras I use are mostly sound activated, though not everyone uses that method but it is the most common. They are homemade, not something you can buy in the store. Some are active all the time waiting, while others are on timers so they come on and listen at specific times around the launch window. Occasionally I may use a timer instead of a sound device, if there is a shot worth capturing where sound cannot come soon enough.

As people we get to watch from wherever the press site is or, sometimes, a public site further away depending on what shot we want. 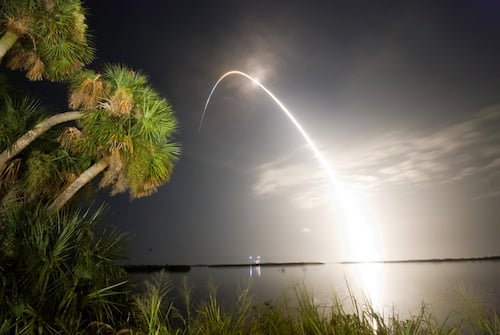 PP: How did you get a job as a NASA photographer?

BC: Soon after graduating in 2008, even though my major was engineering, I really wanted to do something that at least combined photography, and with a lot of experience already shooting for media and myself (especially the remote cameras) I was hired to help shoot with the NASA imaging team.

BC: A plastic Olympus point and shoot; I still have it but it’s at my family’s house so I don’t remember the model! 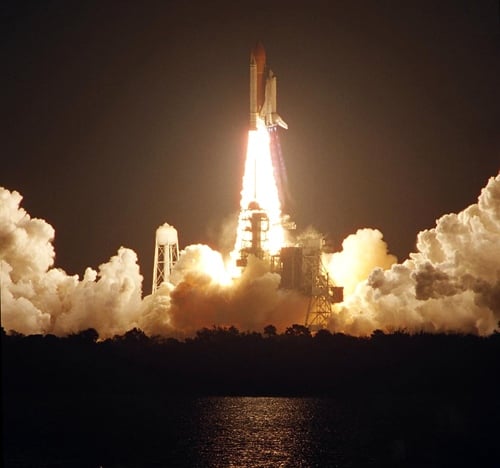 BC: Today I have a couple of Nikon D200s personally, as well as sharing a few Canon digitals with friends of mine (we share equipment a lot and help each other out). I’ve gotten to use a wide range of cameras in both Nikon and Canon, anywhere from Nikon D70 (my first digital) and Canon 10D up to D3x.

PP: Do you use your own gear or NASA’s when shooting launches?

BC: On the job I use NASA’s gear, but shooting for myself or media outlets I use my own. I have used anything from Canon 10D and Nikon D70s, to Kodak Pros, to Nikon D3Xs. PP: How close do you actually get to the launch site?

BC: For launch itself, you the person are several miles away at the closest (for the space shuttle, three miles is the closest anyone gets and this is limited to press, employees and VIPs. For the public, it’s 6.5 miles). Setting up cameras at the pad, the “remotes”, for the shuttle it’s about 1500 feet closest; and for unmanned rockets we can place them as close as say 100 feet away, much more in the danger zone.

PP: What’s the process of photographing for NASA like?

BC: All I do is take the raw images and hand them to the photo editors, whether for public display after a launch or event, or for documentation records on other things. I don’t think they do much post processing for public images at least because I never see corrections made. Which is probably a good thing to an extent. No, I don’t do anything from home. 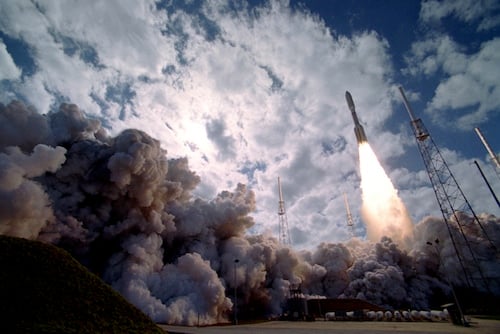 PP: Do you travel to different launch sites, or do you mainly photograph at the site closest to you?

BC: The United States has two main launch sites, Cape Canaveral, FL and Vandenberg Air Force Base, California. Obviously, the shuttle is here in Florida, as are the majority of US launches (Cape Canaveral and Baikonur in Russia are the big, busiest ones).

I have not gotten to Vandenberg yet, however I did have the opportunity of shooting the launch of a smaller rocket out of Walops Island, Virginia, on the Delmarva Peninsula. They decided to revive this NASA facility as a small-rocket launch site in 2006 after a 21 year absence. I shot the first one they had in 2006, and there have been two more since. 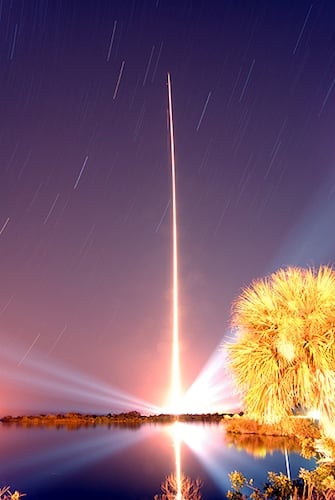 PP: What advice do you have for someone who dreams of doing what you do?

BC: Start off by trying to see a launch! There are only six shuttle launches left as of now and an uncertain future in manned spaceflight until a decision is made later this year. Advice for coming to see one.

Garnering some experience shooting launches or aerospace events, say airshows and such, would probably be a plus. It’s hard to anyone to get close enough to shoot things other than launches, though. 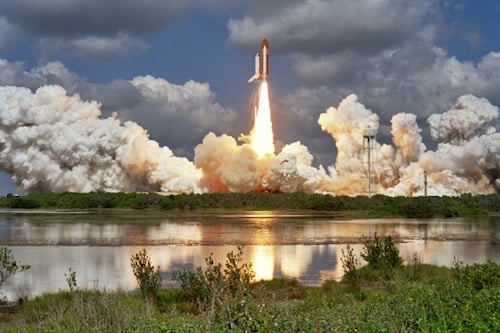 PP: What are some mistakes you see photographers commonly making?

BC: Assuming what they are going to get and what it’s going to look like. Until you see one for the first time, you might not have an idea of what you are about to shoot. And with no second chance on any particular launch (or if you aren’t coming back) could lead to a disappointment. With astrophotography, except in cases where it’s a one-time event, you can always try again because objects stay where they are and you can practice. With a launch I would advise doing a little research or asking around to make sure you get the shot right. I did that my first time ten years ago, and still do it today sometimes despite all I know and can teach. The learning never stops.

Most common mistake, though? Not enjoying the launch. “Watch with your eyes and not in the viewfinder” is my usual advice to people who email for information. I do that myself any chance I get. 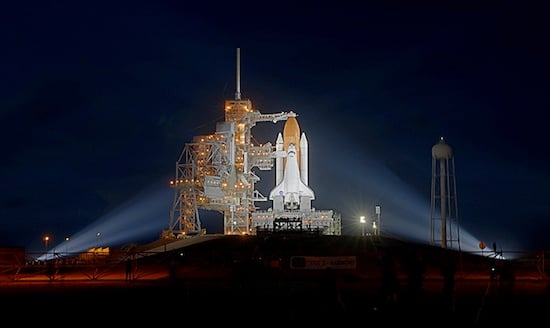 PP: Who are some of your favorite photographers?

BC: Boy I don’t know, I haven’t thought about that too much. I might have to think about it.

PP: Who is one person you would choose to be interviewed by PetaPixel?

BC: That’s a tough one, especially in another field.

I have a friend who I have known a while who has also focused on a specific photo type and become quite good, and that’s shooting trains.

I have other friends who do what I do who I have learned from over the years, and we exchange ideas regularly. Bill Hartenstein is one; James Brown is another. 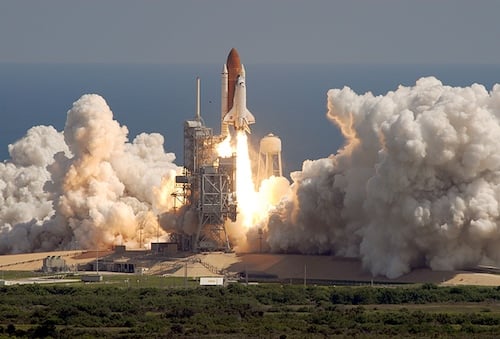 BC: I try to encourage everyone to come see a launch, especially the space shuttle, before it’s too late. Everyone should see one once and soon it will be too late. It’s an experience you’ll never forget, especially at night. And I’m happy to help with any advice people may seek!

We’re Open to Submissions and Ideas