A few weeks ago, I was taking photographs of my friend Tommy at his Berkeley graduation using a Canon 40D and the 24mm f/2.8. I had originally purchased the 24mm as part of a package and was planning on selling it off, but decided to keep it after being shocked by its quality and versatility. Anyhow, here’s an unprocessed photograph of my friends Tommy and Jacob I took right after the graduation: 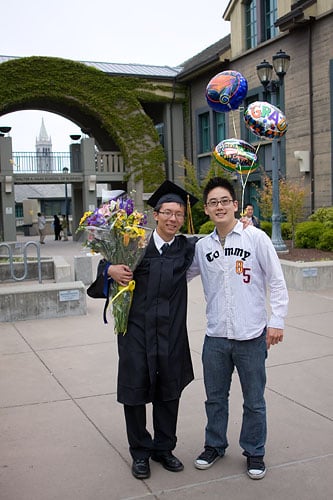 It was a pretty cloudy day, which was definitely a plus in terms of lighting. I shot the photo wide open at f/2.8, which blurred the background enough to bring out the subjects, but not too much in order to keep the campanile recognizable. In terms of framing, I positioned myself so that

Finally, in terms of timing, I waiting until the balloons floated to a visible position above the subjects, since the slight wind was blowing them around.

Now, opening the image in Adobe Camera Raw, I made the following post-processing decisions:

White Balance: Increased temperature from 4950 to 5450 (you can hold shift and press the right arrow key) to bring some warmth back into the scene, since it’s pretty cool. Left the tint unchanged at -2. Hover over the image to compare: 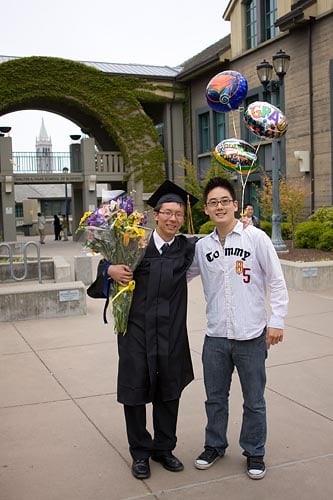 Exposure: Left unchanged, since the photo was exposed pretty well.

Recovery, Fill Light, and Blacks: Now, pressing ‘U’ and ‘O’ to turn on shadow and highlight clipping warning (respectively), we see the following: 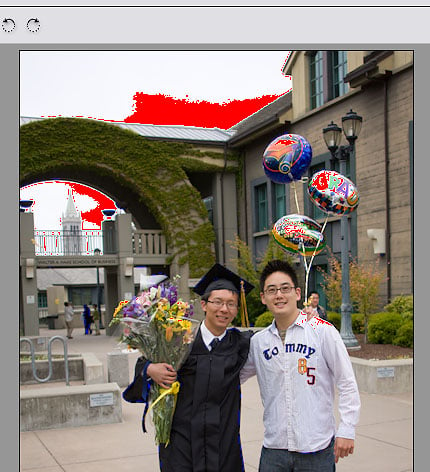 Camera Raw (You can do these things in Lightroom and Aperture too, of course) overlays the image in certain places with blue and red pixels to indicate where shadows and highlights are clipped (where information is lost). The three values we use to try and recover as much of this lost information as we can are “recovery”, “fill light”, and “blacks”. Holding Alt (Windows) or Option (Mac OS) while dragging recovery or blacks will temporarily replace the actual image with a black background, allowing you to see the clipped pixels more clearly.

First, we slide recovery over to 16. I notice that after 16, there isn’t much more detail being recovered no matter how much more I increase the value. Setting recovery to too high of a value results in a muddy looking photograph.

To recover shadow details, we add a little fill light by setting it to 10. This removes most of the black clipping pixels. We can then recover most of the rest by dropping the blacks value down a few points to 2.

What results is an image with more detail, but less contrast. Hover over it to compare: 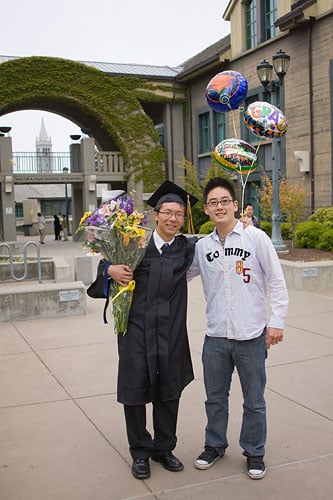 Contrast, Clarity, Vibrance, Sharpness, and Vignetting: To get back the contrast we lost in the process of recovering detail, I move the contrast slider over to the right until it looks right. In this case, I set it at 80. The clarity value can make things like the campanile and edges of the building more defined. I slide it up to 25. Vibrance I increase by 15 to make things a little more colorful. Finally, I sharpen the photo a little and add some lens vignetting to make the subjects stand out more.

Here is the final photograph. Hover over it to compare it to the original, unprocessed version: 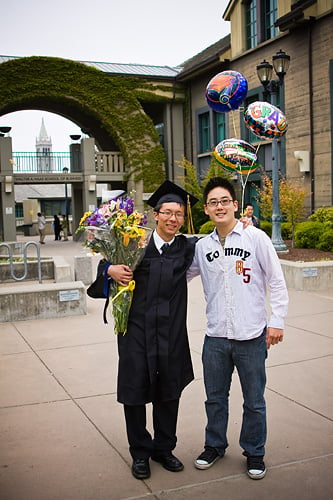 If you have questions, suggestions, or other remarks, please leave a comment! I’d love to hear from you.

Interview with Justin Ouellette of Chromogenic