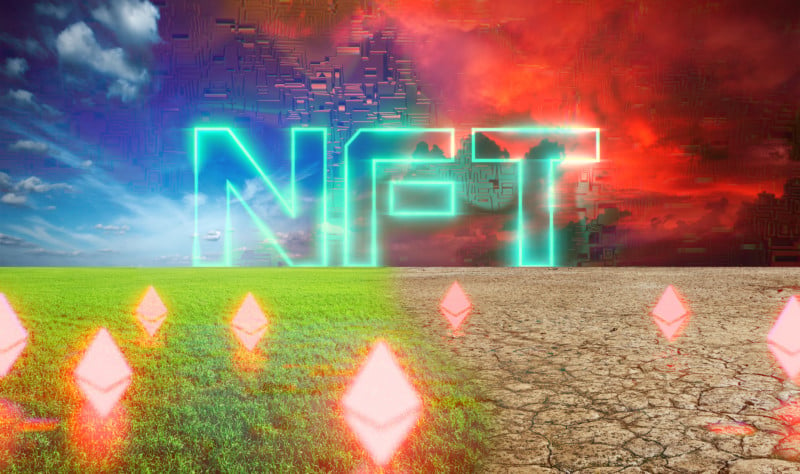 If you are reading this, chances are you’re aware of NFTs — non-fungible tokens that are bought, sold, and traded on a digital ledger known as the blockchain. But what are their costs, risks, and side effects?


For those unfamiliar, make sure to catch up with PetaPixel’s explainer on what NFTs are, and how they are made.

NFTs are one-of-a-kind pieces of digital art and in the last few months have completely taken over the art world. However, NFTs are not new. But their rise in popularity has put increased focus on the environmental toll of a single transaction.

For example, Ethereum, a type of cryptocurrency, consumes roughly 50 TWh (Terawatt-hours) of energy per year, which is equal to the annual carbon footprint of Jordan, according to Digiconomist, which tracks the “unintended consequences of digital trends.”

That’s a lot of energy. And remember: There are over 10,000 different kinds of cryptocurrency, each varying in how much energy they expend. Critics and legislators like Senator Elizabeth Warren want to “crack down” on crypto’s energy consumption, while enthusiasts applaud it for its autonomy and decentralized, peer-to-peer lending system.

So why do NFTs require so much energy? What can be done about it? And, with all things considered, are the cost of NFTs worth the benefits they provide to artists?

PetaPixel spoke with digital artist William Murphy (@wgm_v) and Susanne Köhler, who studies sustainable blockchain technology at Denmark’s Aalborg University, about the relationship between NFTs and the environment.

The Set up VS The Shot

Why Do NFTs Use So Much Energy?

To understand why NFTs consume so much energy, it’s important to understand how the blockchain works. The blockchain, where cryptocurrencies like Bitcoin and Ethereum live, acts as a distributed ledger, which records information, data, and transaction details anyone can see.

The process of validating and verifying the data stored on the blockchain is energy-intensive and generates greenhouse gasses on par with that of small countries and has been blamed for power grid failures across the globe. China plans to dramatically crack down on cryptocurrency trading and mining in the next four years, encouraging the country’s financial institutions to not get involved in the business.

Since NFTs use the blockchain platform to mint, list, and sell digital art, they also contribute to the energy consumption of the system as a whole, according to Köhler.

Read more: How to Mint an NFT: The Photographer’s Guide

“These transactions consume a lot of energy when they are built on proof-of-work (PoW) blockchains,” she said. “PoW is a consensus mechanism that is in place to validate the transactions and secure the blockchain without needing a central authority. PoW is energy-intensive by design as so-called miners compete in a guessing competition of who gets to mine the next block.”

The more miners are involved, the more secure the blockchain is, and the more energy is consumed, Köhler continued.

How Are Carbon Emissions and Energy Consumption Calculated From the Buying and Selling of NFTs?

There are plenty of organizations and individuals keeping track of the carbon emissions and energy consumption associated with cryptocurrencies and NFTs, like Offsetra, Memo Akten, academics, and major financial institutions. Many estimates produce big, scary numbers, but one, which was backed by researchers, equates the listing of a single NFT to driving 500 miles in an average, gasoline-powered car, according to the New York Times.

Energy consumption and carbon emissions are not the same.

Energy consumption is easier to decipher and can be estimated by using the “hash rate” — the power the computers use to mine and process blockchain transactions — plus the energy use of the hardware doing the computing. Carbon emissions, on the other hand, are difficult to tally for a number of reasons: the main being lack of transparency, the use of fossil fuels, and “different energy mixes.”

“It is difficult to know exactly where miners are located and what kind of energy sources are used,” said Köhler. “More data from the mining industry is needed to make a better assessment and to discuss the energy sources used for mining on a system-wide level and not based on anecdotes as it currently is the case.”

What About Carbon Offsetting?

NFTs have a carbon footprint. For example, say you are interested in an NFT from a popular artist. You want to make a bid on it. But so do thousands of others. The more people place bids on that NFT, the more it is traded, the more mining is required, which means more computing power is used.

Most NFT aficionados are aware of the space’s massive environmental toll and have turned toward carbon offsets as a short-term solution to ward off the excess emissions. This could mean donating part of the sale of an NFT to an environmental advocacy organization, calculating your carbon emissions using tools like Offsetra’s, or as simple as planting a tree.

But, according to Köhler, there is a lot more to be done to combat the environmental damages caused by cryptocurrency than carbon offsetting.

“It’s better to offset than to do nothing,” she said. “But reducing the energy consumption is even better. It would be great if the platforms are transparent, but to my knowledge, there is nothing in place that requires them to be transparent right now.”

Considering the Environmental Cons, What Pros Are There for Artists Interested in NFTs?

For artists like Murphy, NFTs have been a game-changer. It’s been so financially lucrative that since selling his first NFT in March, Murphy has been able to quit his job and work on his art full time, something he has been trying to do for nearly six years.

“NFTs have paid my bills, the majority of my income has come from NFTs,” he said. “It’s had a big impact on my life.”

'vivid' and 'luna' both still currently available and waiting for bids via @withFND https://t.co/lO0wQMdQ4J pic.twitter.com/rvEuLM1x5c

Murphy uses Offsetra to calculate the carbon emissions from his NFT sales, and said, so far, he’s been able to offset “40 to 50 tons” of carbon, compared to his output of less than a ton, while also putting aside five percent of the sales of his NFTs to additional carbon offsetting measures. (One ton of carbon emissions is equal to the charging of 121,643 cell phones, according to the Environmental Protection Agency.)

Another way Murphy tries to give back is by donating to the Mint Fund, an organization that funds first-time “crypto creators” mint fees. “It’s helping people in other countries or people in countries where they are experiencing hyperinflation and they might not have the opportunity to get into this otherwise,” he said.

In the future, Murphy would like to see more NFT marketplaces integrate a feature where when an NFT is sold, a percentage of the sale would be donated to an environmental charity that provides carbon offsetting measures.

And, like other crypto enthusiasts, Murphy is not concerned with the NFT bubble “bursting” anytime soon.

“Since it’s a peer-to-peer connection, meaning if people are still using it, it’s never going to go away,” he said. “Unless the internet was going to go away — and at this point, I would say that is not very likely.”

What About the Dwindling Value of NFTs?

Earlier this spring, the value of NFTs hit an all-time high, thanks, in part, to renewed media attention and celebrities, big-time artists, and musicians joining the NFT bandwagon.

Just this month, interest has since waned — drastically. According to cryptocurrency news site Protos, the NFT bubble peaked at the beginning of May, and in the last six weeks, NFT sales have dropped by over 90%. The report also noted that “the number of active NFT wallets” dropped by 70%, perhaps signaling that participants may be questioning whether NFTs are actually valuable in the long term.

NFT is not only a digital art, but also a digital identity. And this trend will only accelerate and will not be reversed.#NFT #Blockchain pic.twitter.com/Sw1yqsWihw

The reason for the spectacular NFT decline, detailed by charts, graphs, and data by sites like Protos and CoinMarketCap, could be for a myriad of reasons, like Bitcoin’s recent plunge. Or rather it is becoming harder and harder for artists to rationalize the high environmental impact of cryptocurrency with the sector’s varying value volatility, while taking into consideration that NFTs may not have the same worth in, say, five years’ time.

It’s possible, though, that cryptocurrency and NFT popularity could reverse yet again, creating a cyclical “boom and bust” scenario. But the unpredictability, coupled with the massive climate cost, may just be enough to scare some folks away for good.

Editor’s note: This explainer is part three of a three-part original PetaPixel series on NFTs. Part one answers what they are, part two explains how they are created, and part three (above) explains the “cost” of their existence.