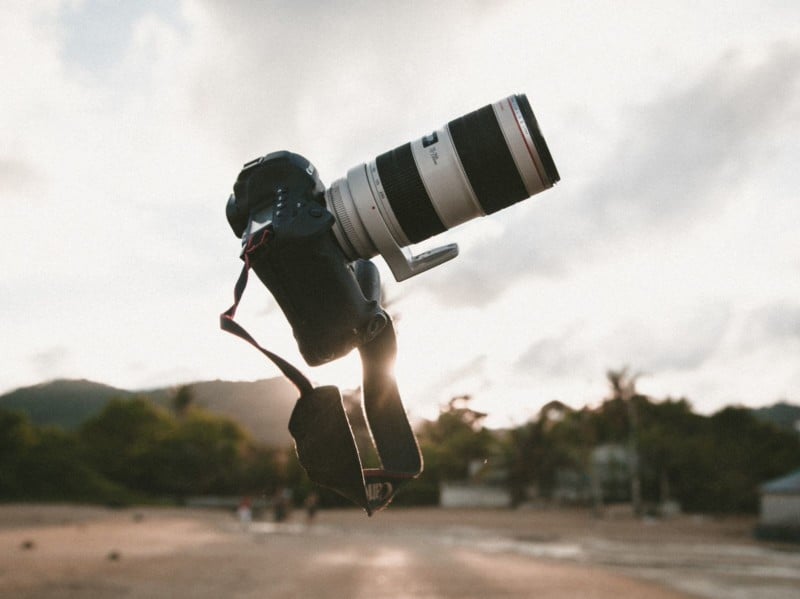 It’s quite a scary thought when you hear your new lens rattle for the first time. Let’s face it, you most likely spent a stack of cash to obtain new gear, and if it’s failing out of the box, you’re not going to be too impressed. So rather than ringing the manufacturer’s support line to complain, know that there is nothing wrong with your rattling lens.


The rattle or clunking sound in your lens is normal. What you are hearing is the Image Stabilizer disengaging from the optics after stabilizing the glass elements in the lens. Aside from this, if you hear any other type of sound when the lens is mounted on the camera it is likely the autofocus or aperture.

An image stabilizer results from manufacturers trying to achieve optimal image quality while minimizing camera shake. Stabilization works by compensating movement within the lens to assist a static image on the sensor. The components that go into an image stabilizer vary depending on the motors, brand, and lens price. Gyro sensors, a stabilization lens element group, and a microprocessor are three main components in any stabilization system.

When you half-press the shutter button on your camera, all three elements work simultaneously to balance any hand-held or movement from vehicles. Typically, there are two gyro sensors, one for pitch (vertical movement) and yaw (horizontal movement). The gyro sensors provide information to a microprocessor, giving instructions to a specialized group of elements in the lens to counter any movement.

All of the stabilization calculations happen in real-time. The whole process is lightning fast to ensure your shutter speed experiences no blur from the camera shake. It’s important to remember no stabilization system is perfect, but technology is improving to assist photographers and cinematographers.

For instance, in the case of sports or wildlife photographers, they can turn the gyro measuring yaw off. Once activated, the stabilizer only works on compensating pitch when capturing moving subjects. This adjustment avoids panning movement in the viewfinder. Users only need to move a switch on their lens to activate the control.

Many brands program the system to lock in a particular position (normally central to the lens). Upon release of the shutter button, this is where you may hear a rattle as the group of elements resort back to their locked position. Or, if you are unmounting an active stabilized lens quickly from a body, the stabilization elements will be audible movements locking into the same position.

How to Best Care for Your Image Stabilization Lens

Manufacturers recommend storing your Image Stabilized lenses in a suitable case or bag compartment. Packing your equipment with enough padding avoids damage as you don’t want the lens rolling around in a loose bag. When not in operation, the stabilized lens group will lock into a particular position (different for all lenses). During transportation, some of the lens group elements in the lens may move slightly in a locked position. If this happens, it’s completely normal. Nothing bad will happen.

You want to avoid shaking your lens vigorously or continuously so you hear the rattle! You may have seen videos online with people doing this; it’s not recommended. In rare events, the gyros, microprocessor, and group of elements could weaken, causing a malfunction in some of the stabilizer frequencies. For instance, at 0.5Hz to 3Hz, the gyros process commands to a microprocessor for hand-held stabilization. Or, within 10Hz to 20Hz, the stabilizer processes information to compensate for vehicle movements.

If Your Lens Rattles, What Should You Do?

To correct some of the older stabilized systems from rattling, power down your camera so that the stabilized lens elements have time to return to the locked position. If you happen to remove the lens while stabilization is active, this is where you will most likely hear a rattle as the lens isn’t in a locked position. Return the lens to a mounted position and power down the camera to fix this. The lens group elements will lock, causing the rattle to disappear.

What About Other Humming Noises?

If you have automatic focus engaged, you may hear a humming noise which is typically a dull-sounding ‘robot-like-hum.’ If this is the case, it’s the linear motor working to drive the autofocus in the lens. You can test this by switching to manual focus on the lens. As soon as you make this change, the hum will disappear. Across all brands, when you hear this noise, there’s nothing wrong with the lens. If you are recording a video and want to avoid the noise, turning the focus to manual is recommended.

Over the years, manufacturers have improved on the internal noises associated with autofocusing. Many older lenses had excellent technology at the time, but systems have improved to provide better focus systems since then. Take Canon and Nikon as two prime examples:

Canon uses two main focus systems; Ultra Silent Motors (USM) and Stepping Motors (STM). The latter is their newest technology and is quieter than USM lenses. The slightly louder noise you will hear with the USM technology is due to the glass moving in the lens; the motor itself is ultrasonic, so it’s inaudible to humans. If you have an older lens, it may not even have USM or STM; in this case, your lens will be the loudest as it will use a micromotor to drive the autofocus system.

Nikon used an autofocus system with an integrated focus motor (AF-I) back in the day. Lens technology has advanced, and now you’ll see Internal Focusing (IF) and Silent Wave Motor (SWM). Like Canon, these autofocus systems are audible due to the glass moving in the lens. In some cases, if you don’t care for the lens by using a filter, debris or sand can enter the lens and cause the noise to become much louder. If this is the case, talk to the manufacturer to have your lens serviced.

Don’t Despair If You Hear Rattling

Don’t feel like you’ve been sold a dud if you have a stabilized lens that rattles. It’s perfectly normal, and there is nothing wrong with the lens. The stabilization system is an important lens tool and should be looked after. Protect your lens and keep it safe when in transportation. The last thing you want to do is check your camera gear when flying.

About the author: Leigh Diprose is a business owner and full-time writer in the imaging industry whose passion is to share knowledge. His published work has been featured by top imaging wholesalers and leading imaging retailers in over 14 countries.