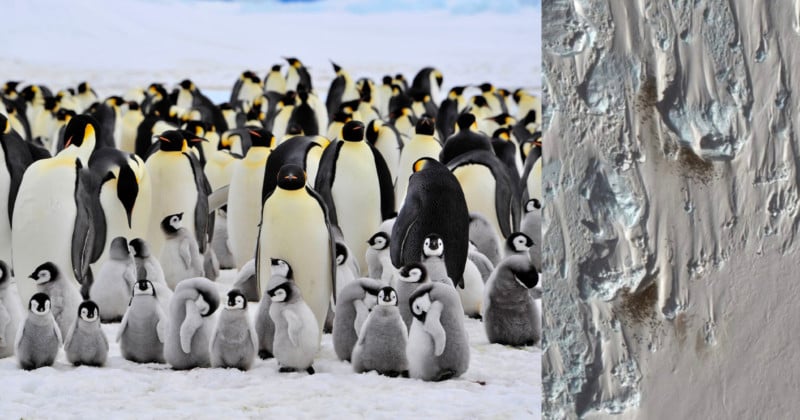 Scientists have discovered an emperor penguin colony living in a remote region of Antarctica thanks to satellite imagery.

The colony of 500 birds were discovered thanks to the guano stains they leave which stand out against the ice. Emperor penguins live in very difficult areas to access, making satellites vital to monitoring the population.

There are 66 emperor penguin colonies dotted around Antarctica’s coastline, half of which have been revealed thanks to satellite imagery.

A team from the British Antarctic Survey (BAS) studied images from the European Commission’s Copernicus Sentinel-2 satellite mission and compared them with high-resolution pictures from the Maxar WorldView-3 satellite. Scientists confirmed the colony’s presence at Verleger Point, West Antarctica.

“This is an exciting discovery. The new satellite images of Antarctica’s coastline have enabled us to find many new colonies,” says Dr. Peter Fretwell who studies wildlife from space for BAS.

“And whilst this is good news, like many of the recently discovered sites, this colony is small and in a region badly affected by recent sea ice loss”.

Emperor penguins are vulnerable to the loss of sea ice, as the southern ice cap warms up the birds will find their favored breeding habitat eroding.

Current climate change models warn that under current warming trends, 80 percent of colonies will be quasi-extinct by the end of the century. This is when a population becomes so small it’s unable to sustain its population.

Even if the global temperatures increase by just 2.7 degrees Fahrenheit (1.5 degrees Celsius), the best-case scenario, experts believe the emperor penguin population will decrease by 31 percent over the next three generations.

Counting penguins from orbit is an impossible task. To land at the 500 number BAS researchers evaluate the birds’ huddles.

In 2020, the team spotted 11 new emperor penguin colonies, once again using satellite imagery to do so. But the scientists warn that most of the newly-found colonies are at the very edge of the penguins’ breeding range situated in areas likely to be lost as the climate warms.

Emperors are the largest species of penguins and stand four feet tall and can weigh up to 100 pounds. The flightless birds huddle together to keep warm in their icy home where temperatures reach as low as negative 130 degrees Fahrenheit (-90 degrees Celsius).