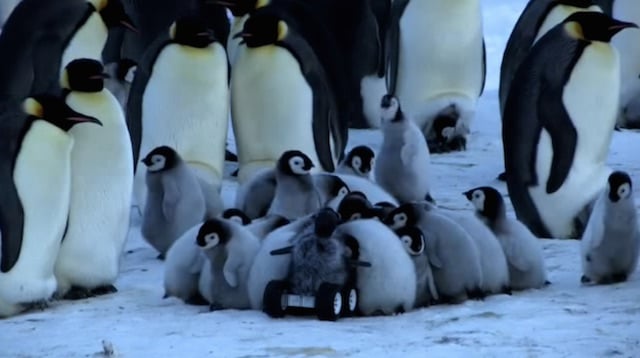 Trying to record and gather data on very shy animals like emperor penguins is a big challenge for scientists. Getting close to them, even with remote-controlled rover cameras, often scares them or makes them act differently.

So, how do you solve this? If you’re Yvon Le Maho and his team from the University of Strasbourg in France, you dress the rover up as a fuzzy penguin chick before sending it on its way.

The best part about this neat experiment is that it worked like gangbusters. Before, when the naked rover approached the colony, Le Maho tells the CBC that the adults’ heart rates elevated and they backed away. Since heart rates were one of the parameters the team was monitoring, that was no good.

But slap a baby penguin disguise on it, and the results are quite different:

As you can see from the video above, the camera was even able to join a ‘crèche’ of chicks, acting as a “spy in the huddle,” as Le Maho puts it.

Even more revealing, the adults were so convinced they frequently sang to the camera, an action the researchers believe was meant to see if it would be a good mate for their chicks. When the robot didn’t sing back, Le Maho says the adults were “very disappointed.”

Check out the video above to see the rover in action, and if you’d like to read up on this experiment and find out what all the scientists were after with the spy cam, the full study was published in Nature Methods this last Sunday.