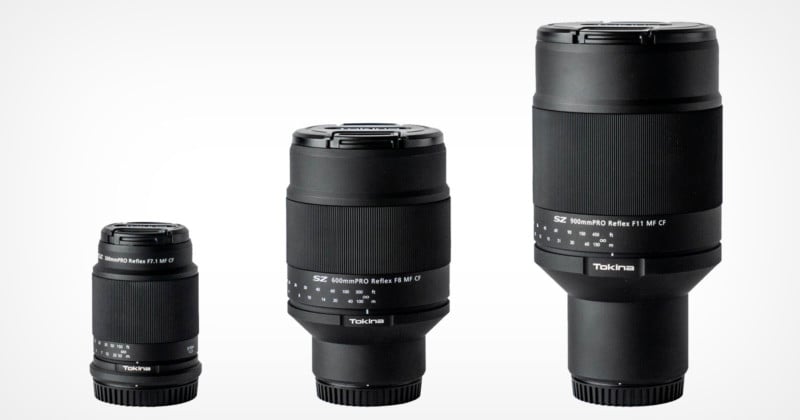 The three APS-C mirrorless camera lenses were first announced last October via a Japanese-based crowdfunding campaign. The company raised about $85,771, which is more than 3,600% of its goal. Even before blowing its goal out of the water, Tokina said that it planned to launch the lenses internationally by the beginning of 2023, so today’s announcement that they would be generally available by February 3 is right in line with those promises.

The lenses, which are being made available for Sony E, Fujifilm X, and Canon EF-M, are fully manual and are reflex lenses — also known as a mirror or catadioptric design — which allows them to be considerably more compact than lenses that use a more typical optical design.

“Thanks to a catadioptric optical design these lenses are very light weight and super compact,” Tokina says. “These products allow you to enjoy the world of super-tele photography, and is a perfect option for users who are looking for affordable super tele photo lens.”

The main downside with this type of lens is that they don’t produce a “normal” bokeh pattern, but instead one that appears like groups of small rings. Some photographers don’t mind it, but others find it to be too distracting. For those that are able to look past the bokeh pattern, the benefit to the design is how small the lenses can be.