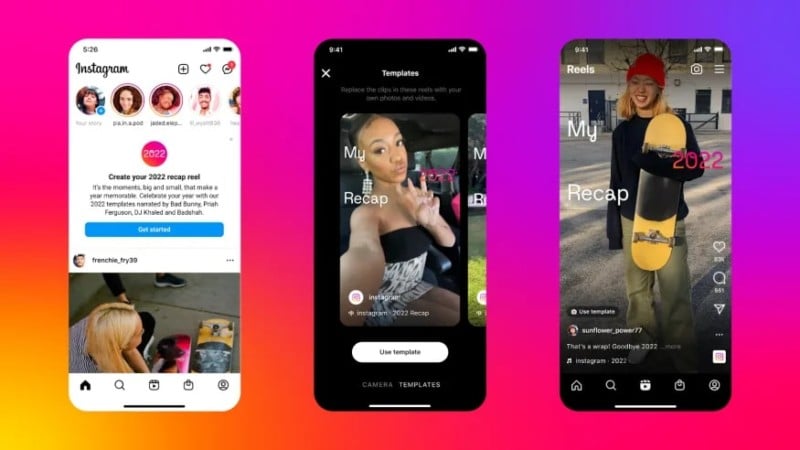 Instagram has released a new end-of-year feature that lets users create a 2022 Recap Reel from their photos.

On Monday, Instagram announced it was rolling out a new Reels template that allows users a customizable way to share both photos and videos from the year with their followers.

To use the 2022 Recap template, users need to navigate to the Reels tab within the Instagram app by tapping the play icon at the bottom center of their screen.

Users then must tap the camera icon at the top right of the Instagram app and swipe the text at the bottom of the screen to the left to access Templates.

They can then choose the “2022 Recap template” and follow the on-screen instructions to select their photos and videos and produce an end-of-year Reel to share with followers.

Users need to choose a minimum of 3 pieces of content for their 2022 Recap Reel, and they can upload both photos and videos.

It’s All About Reels

In 2021, Instagram rolled out a “Year in Review” feature that allowed users to select up to 10 stories to share with their followers.

Prior to that, Instagram users had to create their own version of an end-of-year feature where they would post their top nine images in a photo grid.

The 2022 Recap template is also further evidence of the platform’s continued focus on Reels after Instagram head Adam Mosseri announced it was “no longer a photo-sharing app” last year.

Meta, the parent company of Instagram, Meta had $80 billion wiped off its market value in October.

However, amid these struggles, Meta’s CEO Mark Zuckerberg says that Instagram’s Reels is now the fastest-growing format across Meta’s family of apps and services, hitting a $3 billion annual revenue run rate (ARR) in the third quarter of 2022.

He also disclosed that the production and consumption of Reels were 50 percent more than six months ago.

“Reels are incremental to time spent on our apps. The trends look good here,” Zuckerberg says. “We believe we are gaining time spent share on our competitors like TikTok.”

Zuckerberg’s statements are seemingly at odds with a report published internally at Meta in August that revealed that Reels have less than one-tenth of the engagement of TikTok videos.

According to the internal papers that were seen by The Wall Street Journal, Reels engagement not only fails to keep up even close to what is seen on TikTok but that number is falling. Even more damning, the report disclosed that “most Reels users have no engagement whatsoever.”

Update 12/20: After publication, the story was updated after an Instagram spokesperson reached out to note that there is no 14-photo limit for the 2022 Recap Reel.