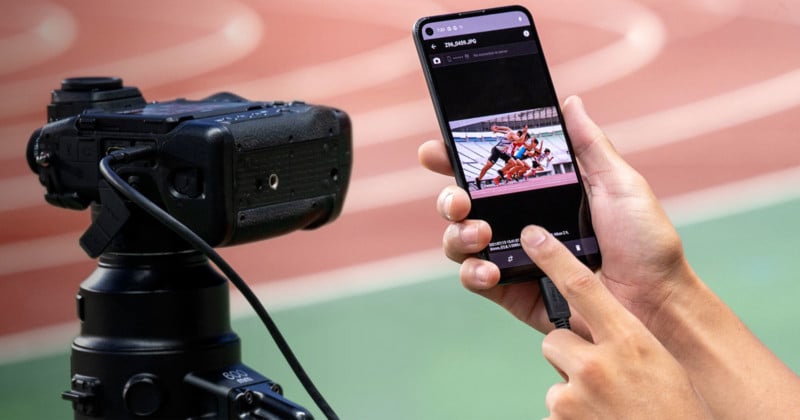 Nikon has pushed an update for its NX MobileAir smartphone app that adds new JPEG capabilities, support for RAW files, new quality of life features, and a deep learning algorithm for image analysis.

Nikon NX MobileAir is a smartphone app that uploads images taken with a Nikon digital camera to an FTP server without using a computer. It was originally launched last November and is billed as a particularly useful tool for photojournalists that are covering large events like the Olympics or FIFA World Cup who might need to get their images to publications quickly but don’t have access to stable WiFi or ethernet.

The company says that as part of this update, functions such as image filtering, which uses image analysis technologies, have been added or modified to improve speed and efficiency of workflows.

First, Nikon has added what it bills as “deep learning analysis” into the app. The company says that NX Mobile Air now has an algorithm that uses deep learning to analyze images that have been imported, allowing users to filter images in specific criteria, such as subject types and conditions for quick access to intended images.

The app also adds the option to adjust JPEG compression ratio and pixel counts when uploading an image to an FTP server. Available for both file and image sizes, Nikon says this level of control will help photographers achieve faster uploads and therefore improve their workflow from shooting to delivery.

Finally, Nikon says that it has added “new user-friendly functions” to the app. The company says that it has made changes to operability and displays, including the way in which images are imported from the camera, as well as a newly added function that synchronizes the clocks of the camera and smart device.

Nikon says that it plans to add more features to the app going forward. Update 1.1.0 of the Nikon NX MobileAir app rolled out to all users this week and is available on both iOS and Android devices.