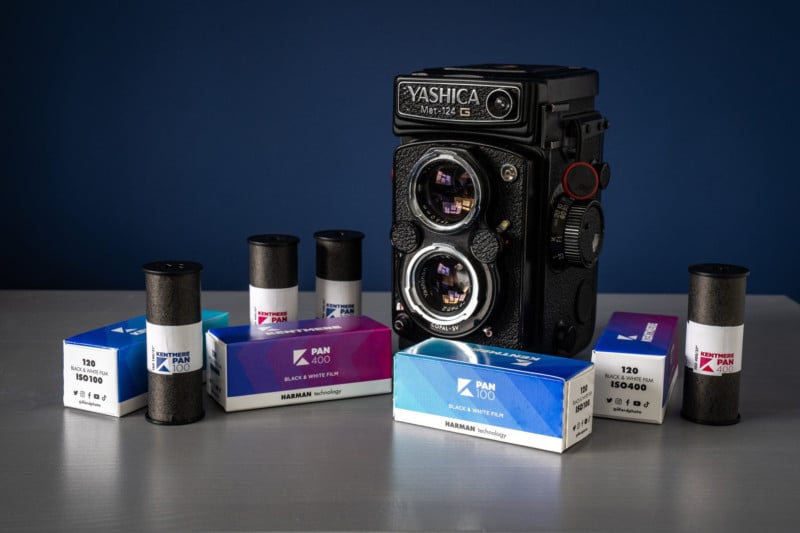 Harman Technologies, the company that manufactures Ilford-brand film, has announced that the Ilford Photo Kentmere Pan 100 and Pan 400 films are now available in 120 format.

Kentmere Pan 100 and Pan 400 were already available for 35mm film cameras, but Ilford Photo is now making them available in 120 format as well.

The company describes Kentmere Pan 100 as a medium speed, ISO 100 panchromatic black and white film that exhibits fine grain and “good” sharpness. Additionally, Ilford Photo says it has a broad tonal range with medium contrast as well as a wide and forgiving exposure latitude. Compared to Pan 400, Pan 100 is slower with finer grain and slightly more contrast.

Below are a few photos captured on Pan 100 120 format film. Click to view larger:

Ilford Photo says that Kentmere Pan 400 has a more classic looking grain that has good sharpness, tones, and “pleasing contrast.” The company adds that it has a wide and forgiving exposure latitude that can be pushed. Compared to Pan 100, Pan 400 has a more noticeable grain, slightly less contrast, and as mentioned takes better to pushing.

Below are a few photos captured on Pan 400 120 format film. Click to view larger:

“Ilford will always be our flagship brand and our most comprehensive / broadest range but we want to expand our Kentmere offering to give people a high quality yet ‘affordable’ entry point to analog photography. By introducing Kentmere Pan 100 and 400 in 120 format, we are primarily targeting budget-conscious photographers who still demand high quality, consistent performance and want to create beautiful images they can print or scan,” Giles Branthwaite, Sales and Marketing Director at Harman technology, says.

Branwaith says that it decided to offer Pan 100 and Pan 400 as 120 format because a majority of those who took part in its global survey said that they used medium format film.

“In our recent Global Film Users Survey, 75% of the the 8600+ respondents used 120 format so there are a lot of medium format photographers out there. While all of our Ilford films are available in this format we wanted to ensure there is choice at different price points. Kentmere Pan 100 and 400 films are not necessarily intended as ‘professional’ films, yet we have seen you can still create exceptional results all professionals would be proud of.”

Ilford Kentmere Pan 100 and Kentmere Pan 400 in 120 format are both available for $5.80 per roll directly from Ilford Photo’s website.