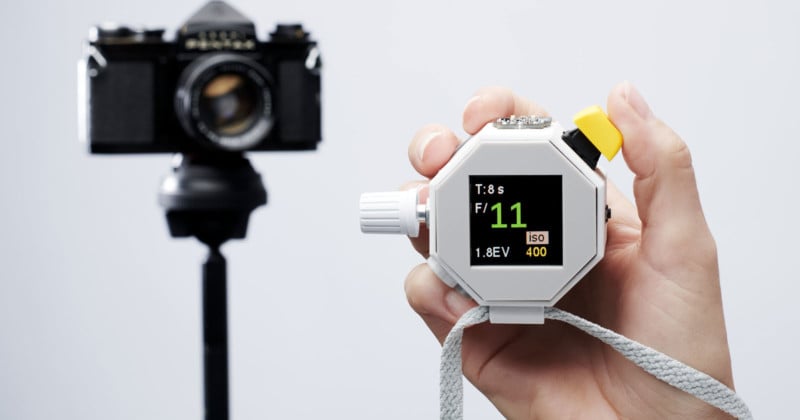 A team of designers has created what it calls the Photon: a small, simple, light meter that is powered by a Raspberry Pi Pico and costs a fraction of what most camera accessory companies charge for one.

Created by VEEB, a group of Switzerland-based photographers that shifted to building “useful” things during the COVID-19 pandemic, the Photon is a palm-sized light meter that was designed to be easy and affordable to make — far more affordable than buying a professional light meter off the shelf.

In a video describing the project, VEEB says that light meters typically cost anywhere from $100 to up to $1,000 depending on the manufacturer and promised features. In contrast, VEEB built the Photon out of relatively cheap components and combines it with “simple maths” and some “code we wrote.” The total parts list comes to less than $50.

The goal of the project — which was recently featured by Raspberry Pi — was to provide film camera enthusiasts a more easily attainable way to assure high-quality photos, especially if their cameras don’t have built-in light meters. Specifically, VEEB wanted to use them in conjunction with a Hasselblad 503CX and a Pentax Asahi, neither of which have light meters.

The concept of light meters is relatively simple. After being told a target shutter speed or aperture by a photographer. the device will read the light in a space and provide the appropriate other necessary settings in order to achieve a properly exposed photo.

“Photon reproduces some of the functionality of more expensive tools, using a few inexpensive/readily available parts,” VEEB explains on the project’s Github. “Currently it measures ambient light brightness, as well as the red, green and blue components of the light, which might allow White Balance readings in future iterations.”

VEEB demonstrates this in the video about the project which shows when they set a shutter speed, the Pico reads the light in the room and provides the necessary aperture to achieve ideal exposure. Further, the ISO can be adjusted which will have a direct impact on the recommended shutter speed.

The VEEB team checked their work against a Sekonic light meter and found that it provided identical results. A full set of build instructions for the Photon can be found on Github.