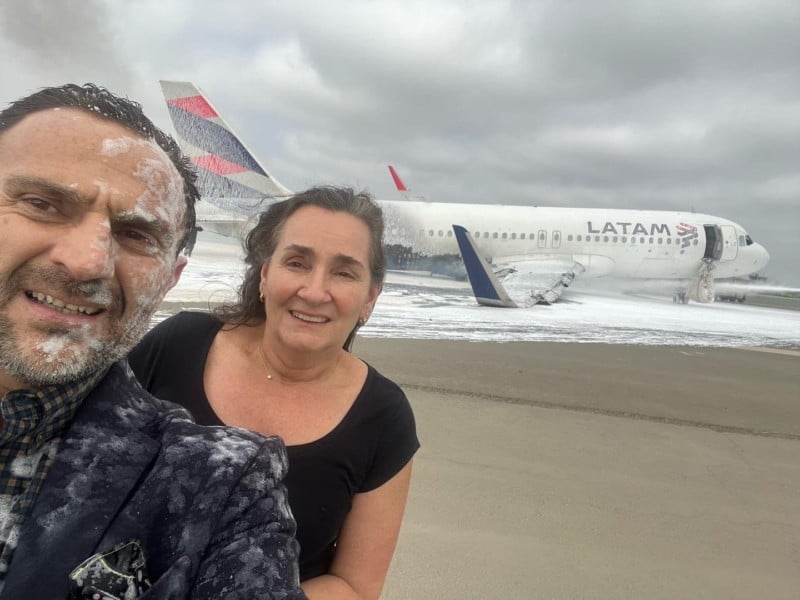 A couple posed for a selfie moments after surviving a plane crash that killed two people.

The plane crash survivors took a selfie to celebrate their survival after their aircraft hit a fire truck in a crash at Jorge Chavez International Airport in Lima, Peru, on November 18.

An individual, named Enrique Varsi-Rospigliosi, shared the selfie on Twitter along with the caption: “When life gives you a second chance #latam.”

In the selfie, the couple and the aircraft are still covered in firefighting foam.

The pair had just escaped the LATAM Airlines plane which crashed while taking off from a runway at the airport. Footage of the crash showed the truck was hit by a wing of the plane causing some of the aircraft’s wheels to buckle. The plane skidded on its undercarriage for hundreds of feet down the runway, and part of it caught fire.

Two firefighters were killed in the crash after the firetruck sped onto the runway and into the path of the plane, carrying 120 passengers.

According to the Mail Online, the couple were reportedly unaware that the two firefighters had been killed in the crash when they took the selfie.

A Great Selfie or Bad Taste?

The couple’s selfie quickly went viral on Twitter, amassing over 210,000 likes on the social media platform.

While many Twitter users celebrated the pair’s survival in the photograph, others criticized them for posting a selfie so soon after the fatal crash.

“In those moments of tragedy, those who leave their lives just want to share the miracle of…living!” one person comments under the couple’s selfie.

Meanwhile, another user called the selfie: “one of the best posts of the year.”

However, others condemned the couple’s rush to take a selfie so soon after a tragic plane crash and said the photograph was “in bad taste.”

“It’s a little foolish to take a selfie with two deceased people,” an individual writes. “I understand that you should celebrate the life you have been given, but there are two lives lost.”

Earlier this month, PetaPixel reported that more people in Australia are dying after accidentally falling from cliffs and experts believe selfies are behind the growing trend.