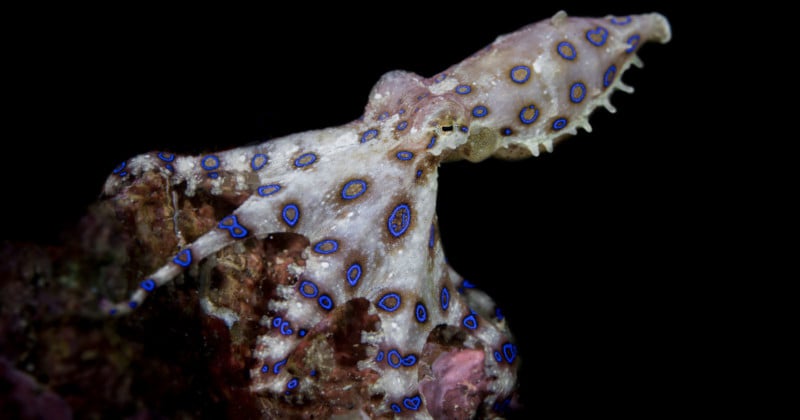 An underwater photographer could not resist taking a selfie with one of the ocean’s deadliest creatures: a highly venomous blue-ringed octopus.

Underwater photographer and marine biologist, Sheree Marris, was diving near the Mornington Peninsula in Victoria, Australia, when she spotted the blue-ringed octopus — whose bite can be lethal to humans.

On Instagram, Marris explained that she was surprised by the rare sighting, as blue-ringed octopus are generally nocturnal creatures “coming out of their lairs at night to hunt, so seeing this deadly jewel during the day was a treat.”

The video shows Marris submerging into the background as the deadly octopus moves closer to the camera.

Marris says that “despite its fearsome reputation” as the most venomous octopus in the world, the creatures are “actually quite shy and will usually try to escape and jet off in the opposite direction at any given opportunity, especially when encountering humans.”

So, the underwater photographer “respectfully” kept her distance from the blue-ringed octopus while also taking a rare selfie with the creature.

Aside from its striking coloring, the blue-ringed octopus is most well-known for its highly toxic venom.

While all octopuses are venomous, the blue-ringed octopus is regarded as one of the most dangerous animals in the ocean. Its venom is 1,000 times more powerful than cyanide. And the golf-ball-sized creature packs enough venom to kill 26 humans within minutes.

The deadly venom is a powerful neurotoxin called tetrodotoxin, which is the same venom found in pufferfish. While their bite may be very toxic, blue-ringed octopuses are generally not a danger to humans and they usually will not bite unless provoked.

Octopuses are often elusive creatures but some photographers have been fortunate enough to get a sighting of them.

Recreational diver and amateur photographer, Andrea Humphreys filmed the moment a giant Pacific octopus wrapped itself around her camera.

Meanwhile, an underwater camera in Jervis Bay, Australia captured two octopuses throwing shells at each other. It is the first time that the unusual behavior has been observed in the species and researchers recorded over 100 instances of the octopuses chucking silt and shells at one another.