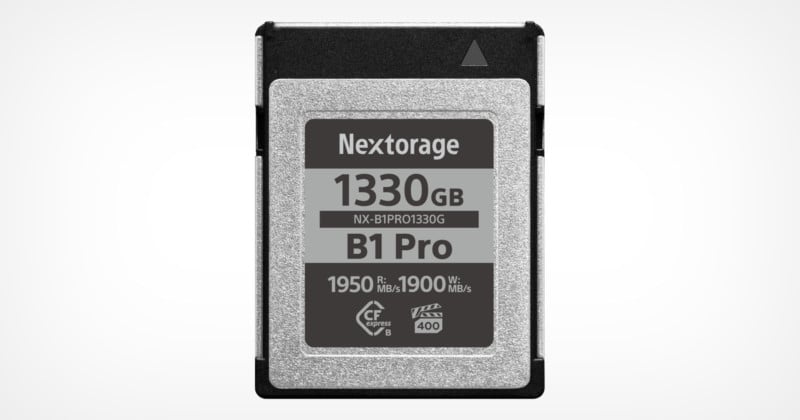 Nextorage has announced its B1 Pro Series of CFexpress Type B memory cards that reach maximum read speeds of 1,950 MB/s and maximum write speeds of 1,900 MB/s — the fastest performance yet.

Founded in 2019, Nextorage is a relatively new company that was created by former engineers of Sony’s memory and storage division. The company is solely focused on creating memory products, with a particular focus on memory cards, for both consumer and industrial applications. The Japan-based company has set lofty goals for itself, including becoming the world’s number one imaging memory manufacturer.

These cards outpace the speed promises that Lexar released earlier this year, which were, at the time, the fastest CFexpress Type B memory cards on the market. Nexstorage has just barely usurped that title with slightly better performance promises.

But it’s not just speed that Nextorage says makes its cards desirable, but also power conservation. The company says that its Pro Series cards are equipped with its Dynamic Auto Power Save technology, a unique system it made for low-power consumption during video recording. The use of this tech offers what Nexstorage says is up to 68% power saving compared to cards that don’t have it, and it saves not only on a camera’s battery life but also prevents thermal throttling from triggering by reducing the temperature of the card as data is written. 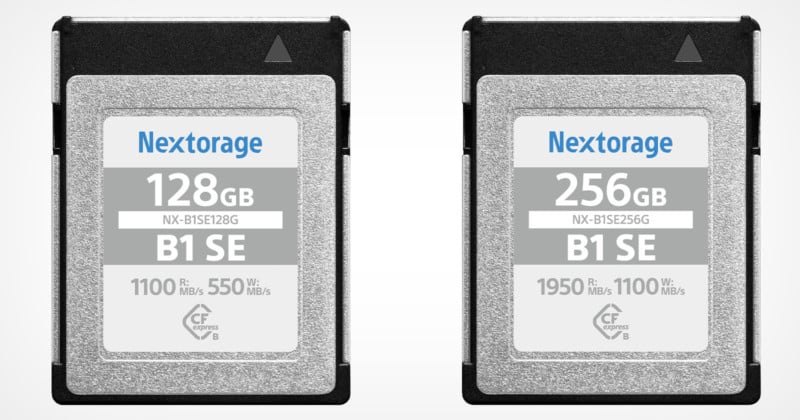 Nextorage has also announce the B1 SE (NX-B1SW) series of cards that it has tailored more for high-resolution photography that has lower capacities and top speeds. Available in 128GB and 256GB capacities, the higher capacity B1 SE card maintains the wicked-fast 1,950 MB/s read speeds of the B1 Pro line but drop the maximum write speed to 1,100 MbB/s and only have a 200 MB/s sustained write promise. The 128GB card has slightly lower performance still, and has a maximum 1,100 MB/s read speed, 550 MB/s write speed, and 100 MB/s sustained write speed.

Both the B1 Pro and B1 SE cards are tested to be shock, x-ray, UV, magnetic, and static resistant and have an operating range of 14 to 148 degrees Fahrenheit (-10 to 70 degrees Celcius). The company says it has confirmed the cards to be compatible with the Canon EOS R3, R5, R5C and Nikon Z9. It plans to update a list of confirmed compatible devices over time on its website.

The Nextorage B1 Pro Series and B1 SE Series CFexpress Type B memory cards will be available on Amazon starting in late December.