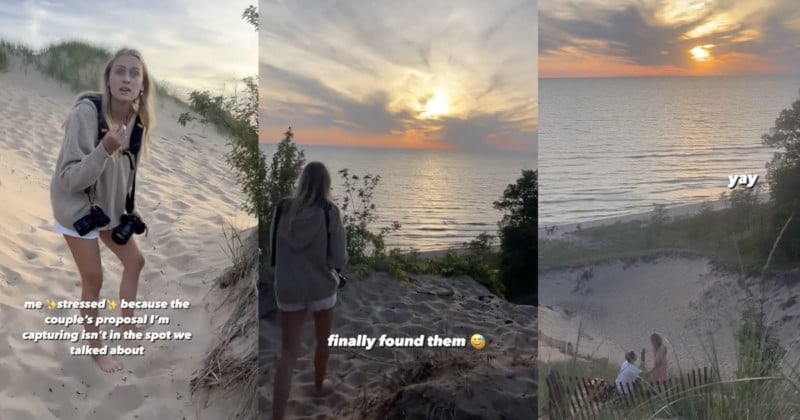 A photographer nearly missed capturing a couple’s proposal after the husband-to-be moved locations without telling her.

In a viral TikTok video, which has amassed 7.9 million views, photographer Autumn Eerdmans shows the moment that an engagement shoot almost went wrong.

According to Fox17, Eerdmans was hired to shoot a couple’s proposal in Laketown Beach in Holland, Michigan in June.

The photographer, who specializes in couples, weddings, and engagement shoots, had agreed on a particular location on the beach with the boyfriend who was planning to propose to his girlfriend.

However, in the video, Eerdmans panics when she approaches the planned proposal location and the couple is nowhere to be seen. Instead, other beach-goers are seated in their spot.

Eerdmans desperately walks around the beach looking for the couple, worried that she is going to miss the proposal. Her husband, Joe Eerdmans, films the TikTok video, as she frantically searches for them.

Thankfully, the photographer finally finds the couple with three minutes to spare before sunset — which was vital to the perfect shot of their proposal.

Eerdmans tells Fox17 that she later found out the husband-to-be was forced to change the proposal location when someone else was already in that spot. However, he did not have service on his cell phone and was not able to tell Eerdmans in time.

“I was like if I don’t get there in time… and the sun is already set, that’s another missed moment,” Eerdmans says. “I was so nervous.”

Fortunately, the photographer got the shot and was even invited to shoot the same couple’s wedding in Grand Rapids, Michigan in October.

Eerdmans says the exposure from the video has helped her with her photography business and has brought on new clients. “It’s incredible,” Eerdmans says.

Sometimes, things can go awry with engagement photoshoots. PetaPixel previously reported on photographer, Yakira Parise who captured the moment a couple lost their engagement ring in the sand during a beach photoshoot.

The couple’s engagement shoot turned into a three-hour-long search for their diamond ring in the sand — before photographer Parise eventually found the jewelry with the help of that picture.