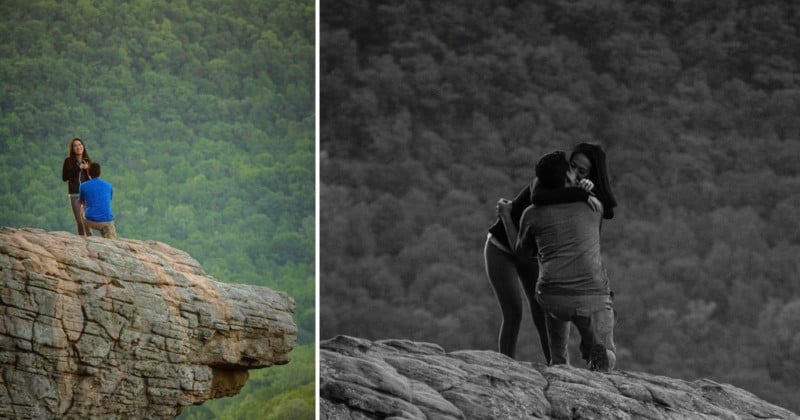 A photographer in Arkansas made an unusual mistake this past weekend: he accidentally photographed the wrong couple’s proposal and completely missed his client’s special moment.

Jacob Peters of JP Photography writes that he was contacted several days ago by a man in Wisconsin who needed a photographer to secretly photograph a romantic sunrise engagement from afar at a popular landmark known as Hawksbill Crag. The man wanted to surprise his soon-to-be fiancée with the pictures.

So at 2:30am on Saturday, Peters woke up, got his 30 pounds of gear ready, and headed out to Whitaker’s Point in Arkansas’ Ozark National Forest. After getting to the forest at 4:45, he hiked and arrived at his photo op spot at around 6. He then set up his camera and got ready for the couple to arrive — Peters had no cell phone service, so all he could do was wait.

At 6:17am, a young couple walked onto Hawksbill Crag in the distance, and Peters began shooting. After a few minutes standing on the rock outcropping, the man pulled out a ring, got down on one knee, and proposed. 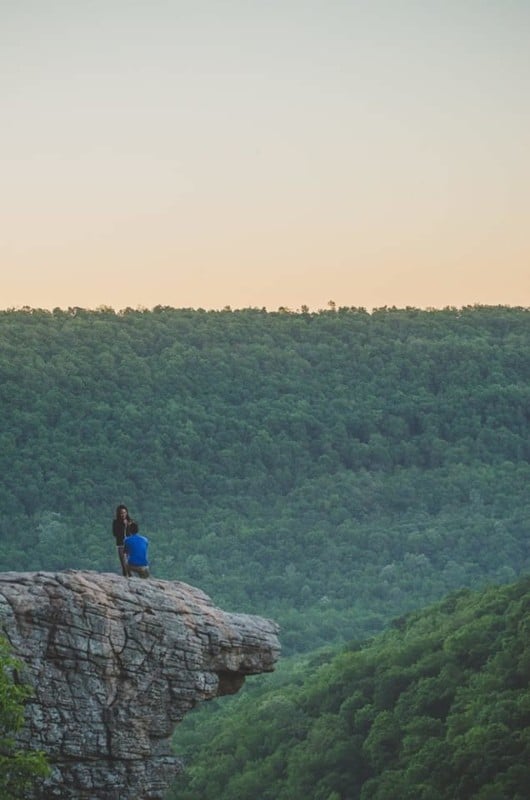 “She turns around and starts crying and hugs him and it’s obvious she said yes and all went well,” Peters says. 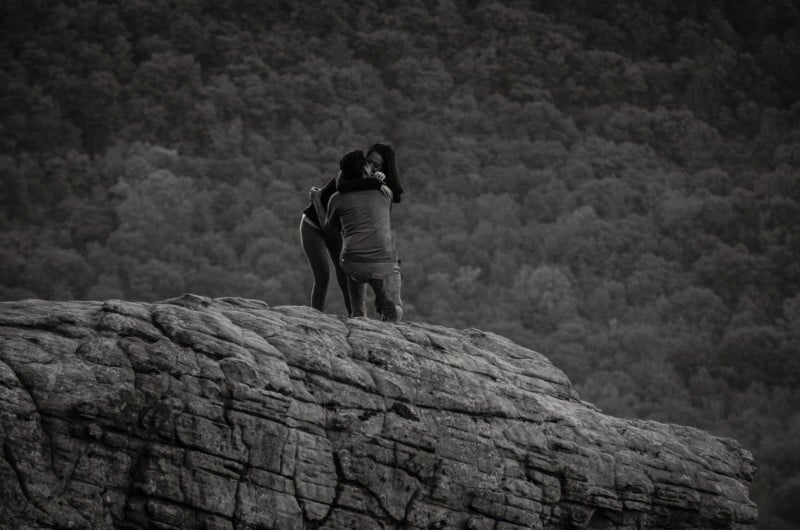 He continued snapping even after the couple sat down and began to enjoy the sunrise. 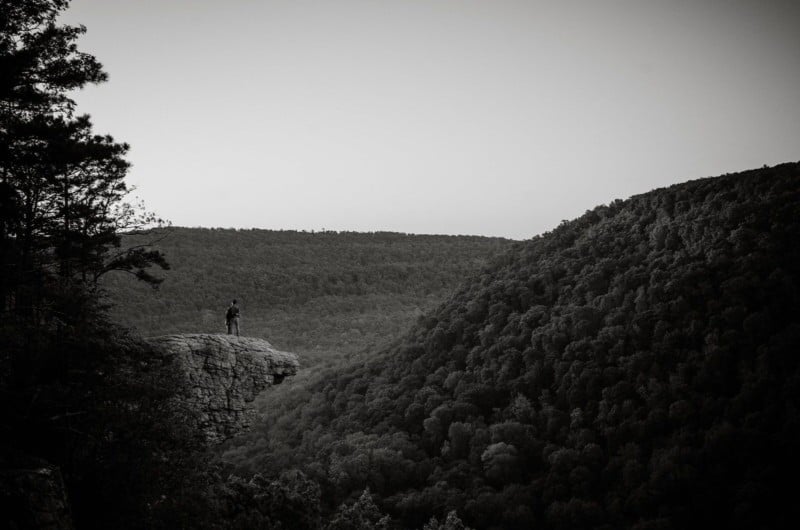 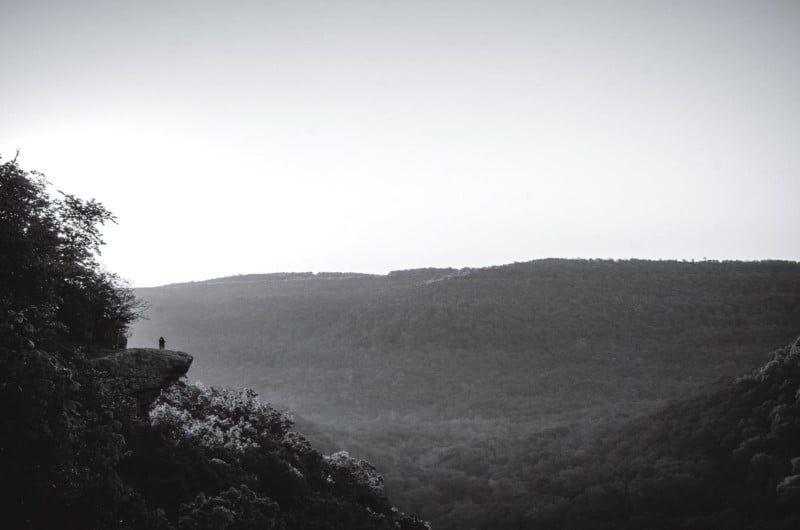 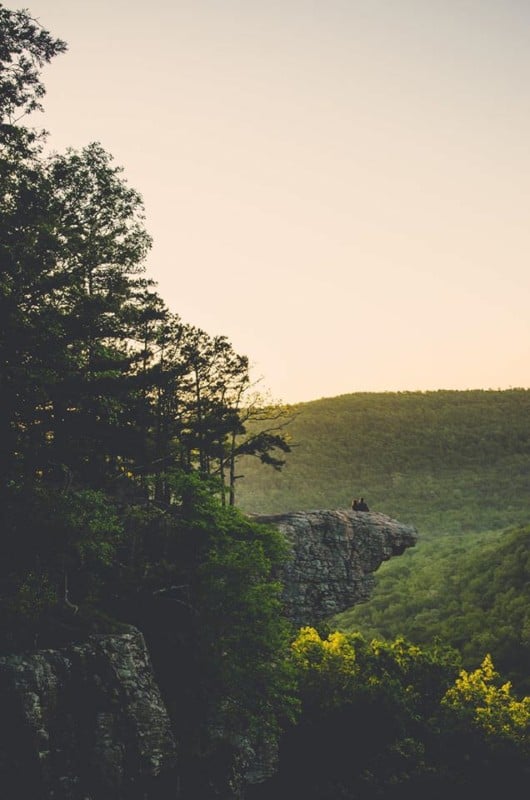 After 15 minutes, he packed up his belongings, did another hour-long hike to his car, and then drove home.

“I send the guy a text saying congratulations, the photos are beautiful,” Peters recounts. “I’m glad it all worked out and then I take a nap since I was very exhausted.”

When he woke up, he was stunned to see the following text from the client:

“I’m confused, we never saw you and we got there a little late, are you sure it was us? I was in a blue plaid shirt…”

It turns out the proposal Peters photographed was the wrong couple — it was another pair of lovers who just happened to get engaged at the same place at the scheduled time. His actual client was an hour late and had no way of getting in touch due to the lack of cellular coverage.

“At first, kind of upset at myself,” Peters tells PetaPixel. “I had just ordered a new camera and this shoot was going to go towards that. And I knew I wasn’t going to charge someone for work I didn’t do. I told my wife what happened and then immediately thought, they had to have seen me and thought I was some creeper in the woods with my camera and 70-200 taking pictures of them.”

“After a few days I figured I have photos that I’m sure this couple probably would like to have so why not try to find them,” he says. After putting out a public request on Facebook, he was able to get in touch with the mystery couple.

“I was hoping they were local but that didn’t matter,” says Peters. “They are from Dallas and they were sent a link to the post from a photographer they were going to hire. Within 4 hours I found out who they were and they couldn’t have been happier.”

Peters is hoping to make it up to his client by redoing a romantic photo shoot with them. He’s currently turning to crowdfunding to raise funds to make that happen.

Image credits: Photographs by Jacob Peters and used with permission