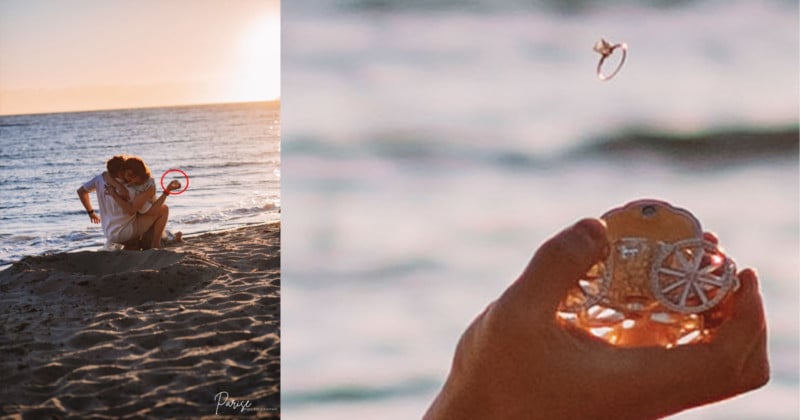 A photographer captured the moment a couple lost their engagement ring in the sand during a beach photoshoot.

Kirsten Durand and Troy Parker from Vancouver, Canada, who run a joint TikTok account as @tandkay021, posted a video that showed how their engagement shoot turned into a three-hour-long search for their diamond ring — before their photographer, Yakira Parise eventually found the jewelry with the help of that picture.

The clip, which amassed 23.7 million views, reveals how their photographer Parise caught the exact moment the ring flew out of the box in an incredible picture.

In Parise’s photograph, the bride-to-be is pictured leaping into her fiancé’s arms with excitement causing him to tumble to the ground and the ring to fly out of his hand into the sand. A second image shows the ring landing on the ground beside Durand and Parker. 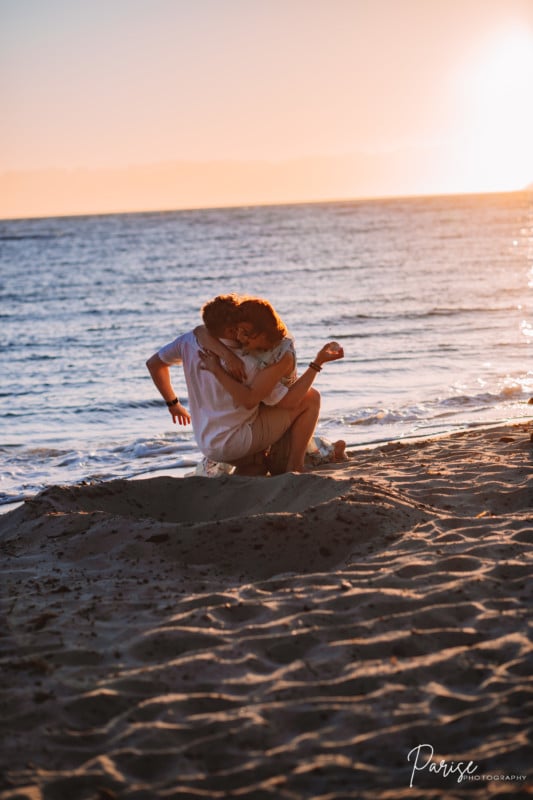 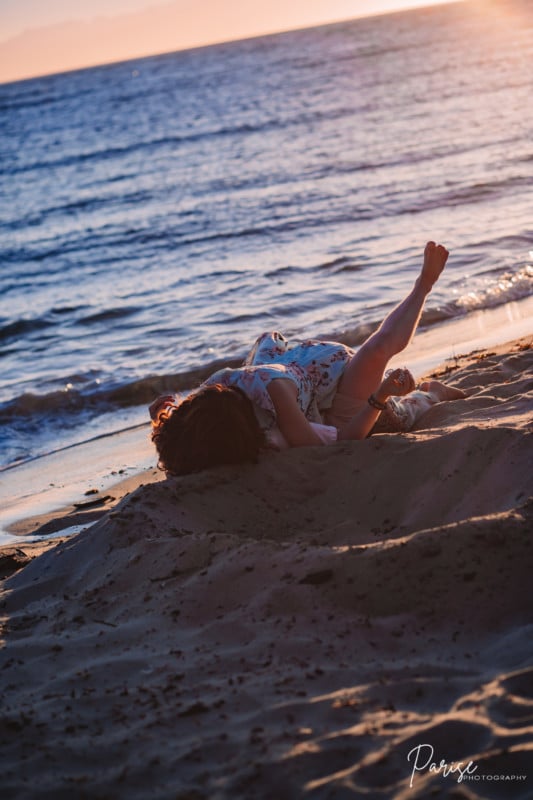 Once they all realized the jewelry was missing, Parise, Durand, and Parker began frantically searching for the ring. Durand enlisted her sisters for help while the photographer even got her stepdad to come down with his metal detector and join the search.

After hours of searching, Parise was the one who found the ring after studying her pictures again and working out exactly where the ring had landed.

@tandkay021 Here you guys go! #thereveal #ending #fyp #mypainisyourgain #proposalgonewrong #proposal #engagement #praisegod #thankyou This amazing photographer and human found my ring. While everyone else was using a flashlight and the netal detector…. All she had was her cell phone light and her hands. Photographers have good eyes!!!! Not only did her family come to the rescue they also stayed very later in the dark and cold. Im so lucky @Kira Miryam ♬ original sound – T&Kay

Parise, who is based in Powell River, British Columbia, tells PetaPixel that she was hired by the couple after she had done some family photoshoots for the Durand’s sister. Durand and Parker asked Parise to recreate their proposal for their engagement shoot.

“The couple had gotten engaged recently but didn’t get good pictures of it, so they wanted to recreate the moment at our shoot,” Parise explains. “Thankfully because they were already engaged, we had taken lots of beautiful pictures with the ring on before the proposal reenactment at the beach and the unfortunate moment.

“Once we realized the ring was gone we were all trying not to freak out.” 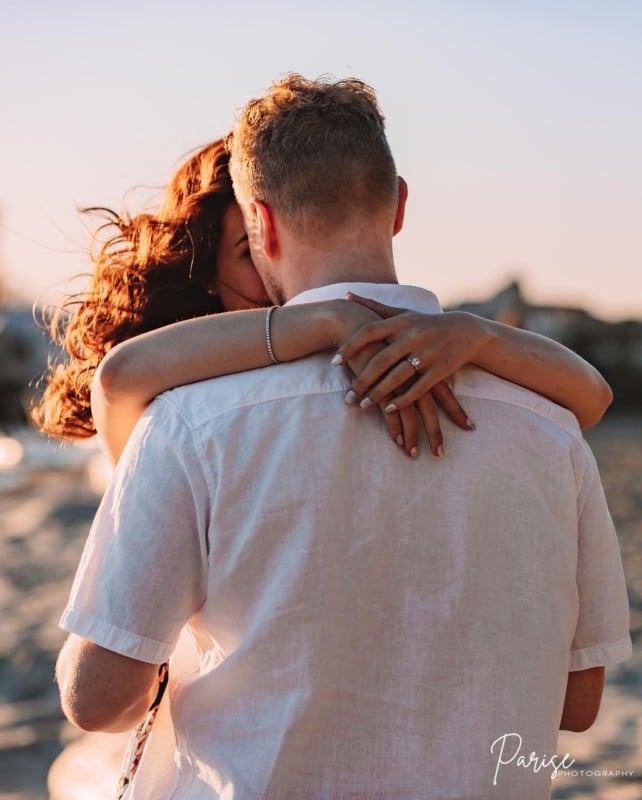 Soon after they had begun looking for the jewellery, Parise says she realized she had caught the moment that Durand and Parker had lost the diamond ring on camera.

“A few minutes after desperately searching in the sand I checked my camera to see if we could spot where it landed,” she says. “You can literally see it [the ring] in the air and then on the ground in the next photo!”

Durand called her sisters and neighbor who arrived at the beach with colanders to help sift the sand and find the diamond ring. Meanwhile the photographer asked her stepdad to come to the beach with his metal detector.

“I remembered that my stepdad had a metal detector, so I called my mom and they came down and helped us look for nearly 3 hours,” Parise says. “After two and a 1/2 hours we still hadn’t found it, and were getting cold and desperate.”

Thankfully, the photographer eventually found the bride’s ring after closely inspecting the photos she had taken again.

“In the end I found it sifting the sand with my hands after studying the photos for the umpteenth time to see where I thought it was,” she explains. “I could hardly believe it! I was so incredibly relieved and thankful.” 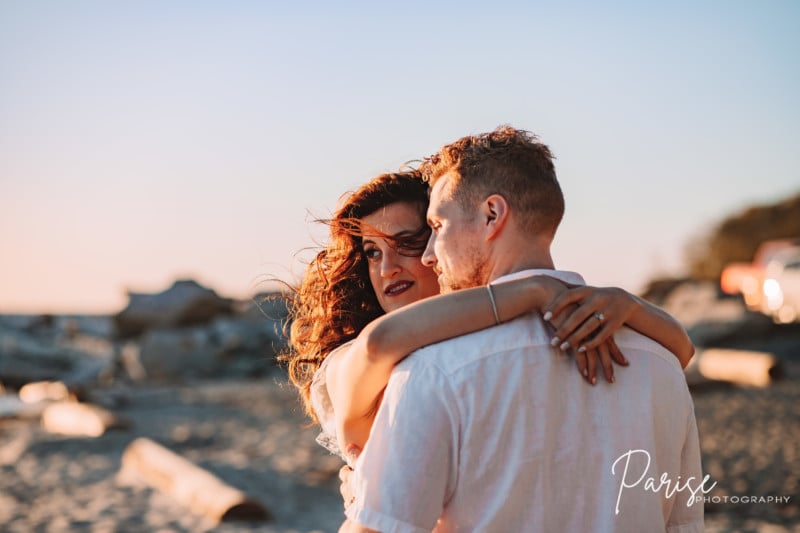 Bride-to-be Durand says the couple will certainly be hanging Parise’s memorable photo from their engagement shoot on the wall.

“First of all I love Kiras work. We will be making a gallery wall with all the photos she made. I love them all!” says Durand. “The one with the ring in the air is definitely a keeper. It will definitely be going on our wall somewhere.”

Durand says they never expected such a huge reaction to their TikTok video: “It was unbelievable the amount of people that cared about a random couple’s happy ending to a very crazy evening.”

Parise, a self-taught photographer who turned her interest into a career three years ago, says she is thankful that Durand and Parker were able to find the ring.

“I’m just so glad it all worked out and we found it! The couple tipped very generously which was super lovely of them,” the photographer says.

“It’s been fun seeing the story go a bit viral on TikTok also. I’m not much of a TikToker but I guess it’s something I’ll have to get into!”