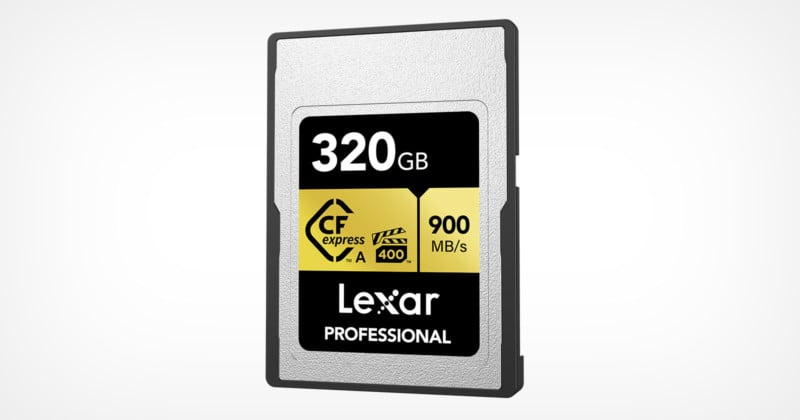 Lexar has announced a new higher-capacity CFexpress Type A card. Categorized into its Gold line, the 320GB card promises up to 900 MB/s read speeds and 800 MB/s write speeds.

The new capacity joins the previous 80GB and 160GB capacities that Lexar launched its CFexpress Type A support with back in August, and unsurprisingly the promised specifications are pretty in line with that card. While there tends to be some level of performance difference among different capacities of card, PetaPixel testing has shown it to be within a margin of error. So with modern memory cards (at least CFexpress cards), generally, the speed of one capacity can be expected to carry across the whole line regardless of size unless otherwise stated by a manufacturer.

Lexar’s new card doubles the capacity of the previous option which it says allows professional creators to get back to business without having to constantly switch cards. Just like with the previous capacity, the Type A Card Gold Series 320GB CFexpress Type A card is rated with the Video Performance Guarantee 400 (VPG 400) which stipulates that the card cannot at any point dip below a minimum write speed of 400 MB/s.

In the previous testing, the Lexar Gold Series CFexpress Type A card returned a sustained transfer rate that never dipped below 521 MB/s and peaked at 671.3 MB/s for an average of 550.4 MB/s. This is below Lexar’s promise, but still well above the 400 MB/s minimum.

As mentioned in previous coverage, Lexar’s performance — which outclassed other CFexpress Type A cars from Sony and ProGrade Digital in some metrics — doesn’t come cheap. 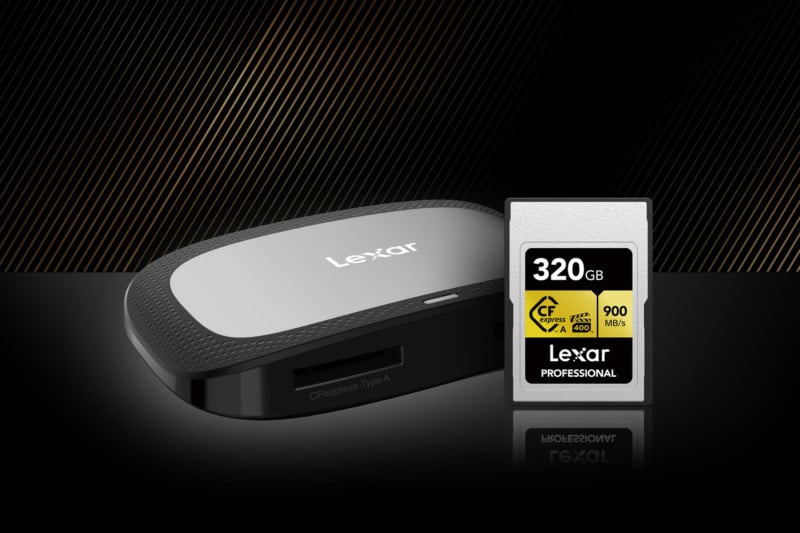 The Lexar Professional CFexpress Type A Card GOLD Series 320GB is currently only offered as a bundle with Lexar’s CFexpress Type A/SD Card Reader, which can be purchased for $700. Considering the 80GB capacity sells for $200 and the 160GB capacity is priced for $400, doubling the capacity and getting a card reader included for $700 is slightly more economical than buying multiple smaller capacity cards together.

Update 11/8: Corrected the capacity of the card in the title and first paragraph.