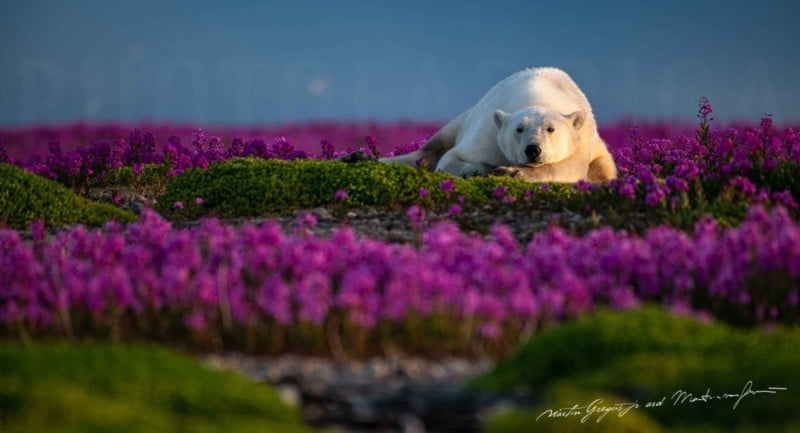 A photographer spent 33 days in the northern reaches of Canada observing and documenting the lives of polar bears in the summer.

Photographer Martin Gregus combined his drone photography and cinematography expertise to capture these intimate and unique portraits of polar bears in the summer months. 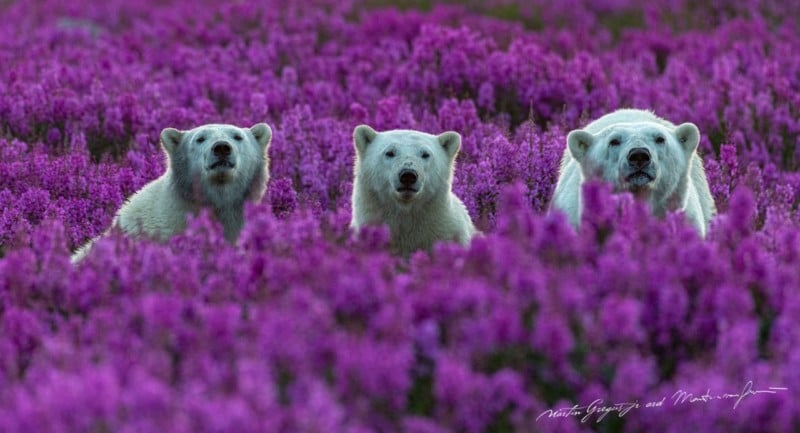 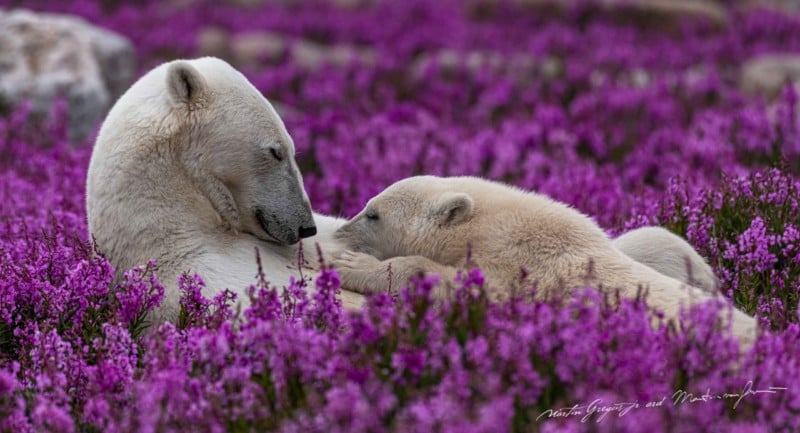 While most polar bear photography depicts the animals against a backdrop of ice and snow, Gregus’ photos offer a different view of the Canadian Arctic, with the bears pictured in a field of purple flowers.

Gregus’ work has been recognized in contests across the world, dating as far back as 2008 when, at the age of 11, he entered the Natural History Museum’s “Wildlife Photographer of the Year” competition and won a special commendation. 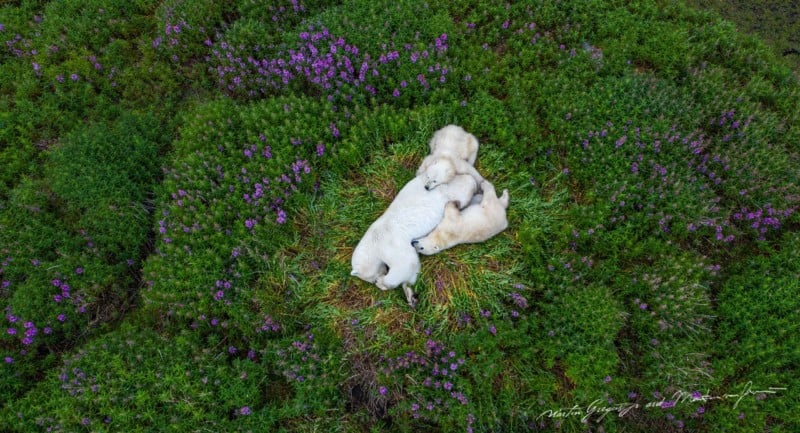 His passion for documenting stories and wildlife culminated with a two-part expedition — first for 13 days in the summer of 2020 and later for a further 20 days in 2021 — where Gregus spent 33 days two hours north of Churchill, Canada.

By utilizing DJI drones, GoPros, and a Nikon D850 in an underwater housing, Greggs was able to get up close and personal with the polar bears all the while staying invisible to them. His photographs capture the animals’ most undisturbed moments and their extraordinary behavior when there is no snow in sight. 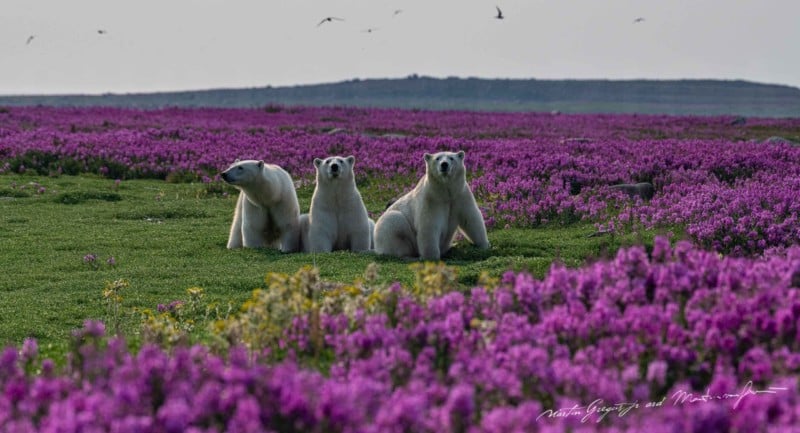 “The inspiration for the images came back in 2015 when myself and my father saw our first polar bear in the summer,” Gregus tells PetaPixel.

“At the time we saw some unique behavior and with no ice around I wanted to see what else was there to see. So an idea came to mind to document these amazing creatures in their environment during the summer without any snow or ice around.” 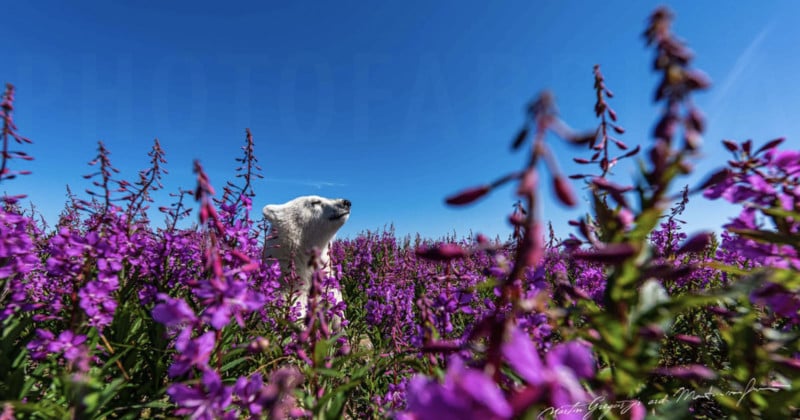 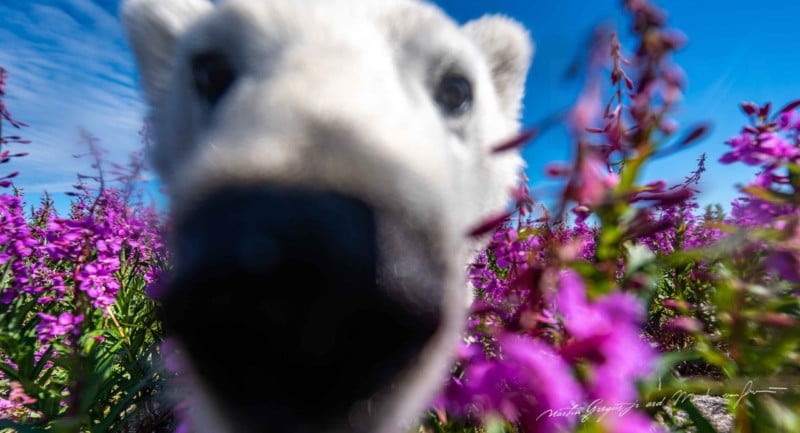 However, while Gregus’ photographs give viewers a rare insight into the summer lives of polar bears, the photographer is keenly aware of the impacts of climate change on polar bears.

“While the goal of this project was to capture the beautiful side of bears in the summer I don’t want to take away from the fact of climate change and other threats facing the bears and our natural world,” Gregus says.

“While the fact that there is no ice is completely natural for this part of the Arctic and the bears are adapting to a warmer climate it is the unpredictability of the arctic that is the biggest threat to the bears,” he adds.

Gregus has numerous projects and expeditions in the works, both in Canada and internationally. In 2021, he won the Rising Star Portfolio Award in the National History Museum’s prestigious Wildlife Photographer of the Year (WPY) competition and his documentary film on his time with the animals, 33 Days Among Bears was released earlier this month.

“I would like for people to see my images and to be able to relate and build a relationship with the bears,” Gregus says.

“The bears themselves are extraordinary, each has its own character, appearance, and place in the arctic landscape. It’s only once you live with them and get to know them like we have that you get to truly understand them.