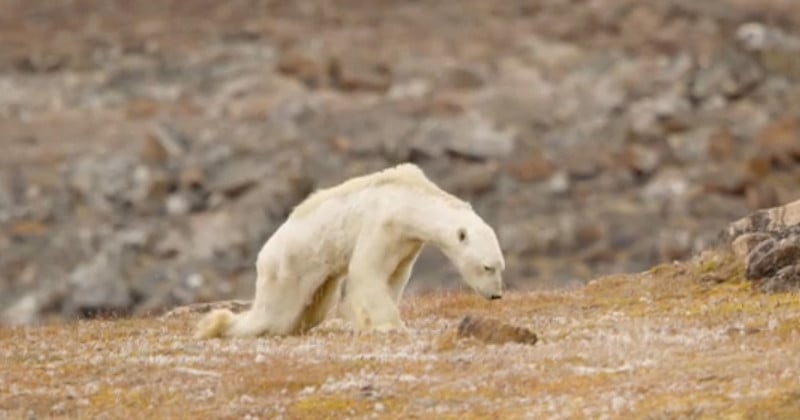 National Geographic photographer Paul Nicklen was visiting the Baffin Islands in Canada this summer when he came across a heartbreaking sight: a starving polar bear on an iceless land.

Nicklen captured this footage of the bear, which National Geographic just published:

The video “shows the polar bear clinging to life, its white hair limply covering its thin, bony frame,” writes National Geographic. One of the bear’s back legs drags behind it as it walks, likely due to muscle atrophy. Looking for food, the polar bear slowly rummages through a nearby trashcan used seasonally by Inuit fishers. It finds nothing and resignedly collapses back down onto the ground.

Nicklen was on the island with a group of filmmakers from the conservation group Sea Legacy, which aims to create high impact visuals to convince people to protect Earth’s oceans.

Although he has seen over 3,000 bears in the wild over the course of his biologist and wildlife photography careers, Nicklen had never seen anything like this particular polar bear. “The emaciated polar bear […] was one of the most gut-wrenching sights he’s ever seen,” National Geographic says.

“We stood there crying—filming with tears rolling down our cheeks,” Nicklen says. He and National Geographic say this video illustrates what climate change looks like, as shrinking sea ice makes it more difficult for polar bears to find food.

“When scientists say bears are going extinct, I want people to realize what it looks like,” the photographer says. Bears are going to starve to death. This is what a starving bear looks like.”

The World Wildlife Fund reported back in 2002 that climate change could cause the eventual endangerment and extinction of the polar bear. This year, the U.S. Geological Survey followed up by confirming that melting sea ice poses an existential threat to polar bears.

Update on 12/13/17: The National Post argues that National Geographic and Nicklen may have gotten this story wrong, saying it possibly has nothing to do with climate change.