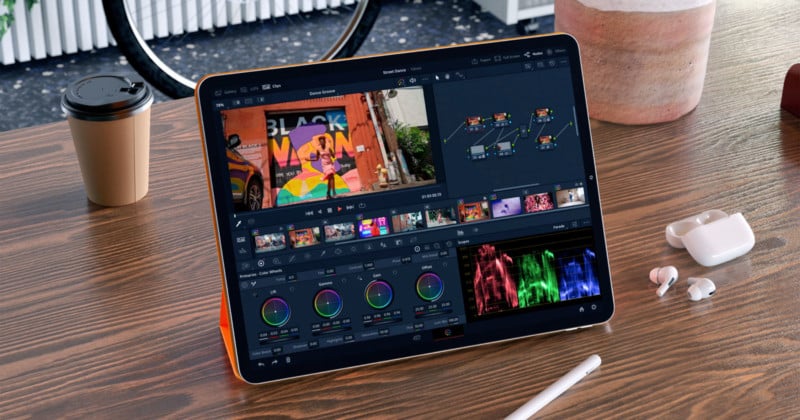 Blackmagic has announced that it is bringing its powerful video editor and color grading software DaVinci Resolve to the iPad, which will be optimized for MultiTouch and the Apple Pencil.

The iPad version of DaVinci Resolve will bring many of the most used features from the flagship desktop software including support for cut and color pages — which provides access to DaVinci’s image technology — color finishing tools, and the latest HDR workflows. Blackmagic says that it will also connect with Blackmagic Cloud, which allows editors to collaborate with multiple users remotely.

The company says that this means DaVinci Resolve for iPad is the same professional tool as the desktop version and uses the same codebase.

The company says that the software has been optimized for Apple Silicon to deliver up to four times faster Ultra HD ProRes render performance on the iPad with an M2 processor that was announced earlier this week. HDR is also supported for those using a 12.9-inch iPad Pro with the M1 chip. Support for multiple displays means that users can connect to a calibrated monitor and check grades and make changes from the iPad.

“There are some adaptions to the UI based on screen size, such as not having a menu bar, however the full color and cut pages are provided,” the company says.

“DaVinci Resolve for iPad does not include the Fairlight audio page or the Fusion visual effects page because their software code has not yet been redesigned for the iPad. We will continue to work on these pages and will include them in the future,” Blackmagic continues.

“The edit page is not included as it was originally designed for large screens, with a keyboard and mouse. This makes it very difficult to move to the iPad without changing it in a way that would cause problems for professional editors who rely on the edit page for their work. We expect the edit page to remain a desktop only page,” the company explains.

“However this means the cut page needs more features so it can operate on the iPad when the edit page is not available. Until now we focused on adding new types of features to the cut page, because the edit page was always available. However on the iPad, that’s not the case. So we will be working hard to add more editing features to the cut page as soon as possible. These features will include enhanced audio support, key framing, split edits and more. We will release these updates as we add the features.”

Blackmagic says that DaVinci Resolve for iPad will be able to open and create the same save files that the full desktop version of the software can and work with H.264, H.265, Apple ProRes, and Blackmagic RAW files with clips able to be imported from the iPad Pro internal storage and Photos library or externally connected iCloud and USB-C drives.

DaVinci Resolve for iPad is set to release sometime in Q4 of 2022, so within the next two months. The app will be available to download from the Apple App store when it becomes available.

While specifics weren’t detailed, Blackmagic appears to be keeping the pricing structure of the flagship app and carrying it over to the iPad. The app will be divided into two options, one free and one paid. The free version, called simply DaVinci Resolve for iPad, will offer the ability to upgrade via an in-app purchase price of $95 — a one-time fee per the company’s Facebook — and bring features found in DaVinci Resolve Studio to the iPad experience.