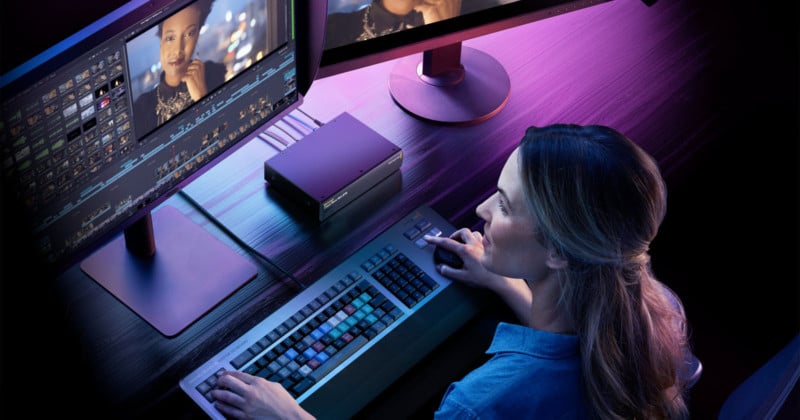 Blackmagic’s DaVinci Resolve 18 brings a ton of new features, but the headline addition is cloud collaboration which could make DaVinci a serious threat to the dominance of Adobe Premiere even amidst its recent Frame.io integration.

With the industry steadily moving toward cloud collaboration through a worldwide internet-based framework, Blackmagic’s answer is DaVinci Resolve Cloud. Blackmagic’s design is opting for a tried and true email approach that will serve as the main hub of communication while it also leans on a central data server to do all the heavy lifting.

This approach enables all computers and devices to remain in sync across a worldwide network of teams, only instead of linking devices, the cloud workflow syncs users through their individual email accounts. Once a DaVinci Resolve Cloud account is set up and a project is put together, the software will maintain all links to footage and other assets, including proxies, and change edits. Additional team members can be invited via email through the multiuser mode.

Resolve Cloud also syncs media using DropBox and team members can share screens or monitor changes and approve them in real-time using all the most popular video conferencing services. Resolve will show with an icon that there are changes being made with the user’s name and color as well, for full transparency.

This isn’t the final form of Resolve Cloud, and the company says it is going to add a new feature called Presentations in the future. Presentations will enable teams to virtually meet directly within Resolve without the need for a third-party conferencing platform. Blackmagic hasn’t said what it expects to charge for access to Presentations.

The Cloud interface is rolling out to DaVinci Resolve as a free update, but will cost $5 per library per month to cover the costs of data management at the server level. If teams are working from an existing private server instead, then there is no cost to operate the DaVinci Cloud service.

DaVinci’s new Color Grading features include something very similar to content-aware fill, yet designed for color grading. The Magic Mask Palette is able to intuitively detect and track objects with a scene and key them independently. The user simply draws around what needs to be masked and tracked, and the magic mask palette will track it and isolate it, giving the colorist complete control over adjusting color and shade to accentuate the subject.

The Color Grading Pane also has a Depth Map Tool which enables the colorist to grade part of a scene, add artificial depth of field to the background, or even make natural beauty changes by overlaying shades or removing artifacts and fringing that have bled into the image.

The Ultra Beauty Mode enables natural beauty corrections of an object or subject and improves them in a natural way that doesn’t stand out. If the editor needs to change hair color, add bolder eye shadow, or even add a tattoo, it can be done in a natural, digital way through Ultra Beauty Mode.

Meanwhile, the Surface Tracker can overlay or replace graphics on a moving object, like a T-Shirt logo, and either replace them or blur them out with effects. Speaking of effects, DaVinci 18 has added video effects including smoke, mist, displacement maps, half-edge, gamma, and filter controls, glows, and de-spill from an unwanted color spill. Adjustments can also be made to Chromatic aberration and lens reflections with a slider, and even grain can be added without going to a third-party application.

The edit pane is also receiving updates, including those intended to improve performance and make it easier to find footage. Since DaVinci 18 is now optimized for native use with Apple’s M1 platform, user preferences have been streamlined, and Blackmagic has added macOS finder tags to get to needed footage faster and by keyword search.

DaVinci’s new Proxy Generator will automatically generate proxies in those times where working with ultra high resolution footage over 4K could bog the workflow down. The Proxies can also be set with preferences and permissions of read-only, write, or both for team members working in the Cloud interface. The free version of DaVinci also has its own lite version of the Proxy Generator.

The editing pane also has a Multicam mode with a 5×5 layout, so that editors have direct access to live stream video from up to 25 separate angles and video sources. Through DaVinci Cloud, editing can also be done with the live stream in real-time, making DaVinci a powerful live broadcast streaming application.

The live stream can also be broadcast anywhere in the world to a remote computer monitor, or a reference grading monitor, via DeckLink in 12-bit color.

Blackmagic has made some serious performance jumps in the latest version of Fusion, which can now preview footage without the need of pre-rendering first.

The paint tool is now GPU accelerated, so that rendering speeds on changes have been increased, and the merge tool also offers blending modes and the ability to merge and combine maps. This is now also a Quick Export option with improved layout and output settings.

Finally, in the Fairlight Audio Pane, Blackmagic positions Flexbus audio bussing and routing as a big new feature. With nested timelines, merging one timeline into another with new busses, routing, and processing promises to be as simple as a mouse click, all without affecting other mixes in the timeline. Fairlight also has newly built-in presets within Channel Click EQ controls and channel dynamics menu.

DaVinci Resolve 18 is available for free as part of a public beta for Windows, macOS, and Linux starting today and can be downloaded from the Blackmagic Design Support page.