X-ray data from NASA’s Chandra Observatory has been combined with the infrared data captured by the James Webb Space Telescope to create new composites that make the most of each’s data gathering capabilities.

The Chandra Observatory says that combining the data together underscores the power of any of NASA’s telescopes is only enhanced when joined with other instruments, both those in space and on the ground. The new images features some of the earliest observations from Webb that were released earlier this summer: Stephens Quintet, the Cartwheel Galaxy, SMACS 0723.3–7327, and the Cosmic Cliffs of the Carina Nebula.

NASA explains that Chandra had already observed these sources and these composite images show how these two space-based telescopes complement each other. In each image, the X-rays from Chandra show higher-energy processes than the infrared view from JWST.

Stephen’s Quintet, also known as Hickson Compact Group 92, exists about 290 million light-years away, and four of the five galaxies within the quintet are what NASA describes as locked in a cosmic dance of repeated close encounters. Webb’s photo of the group of galaxies was one of the first five images that Webb ever captured. 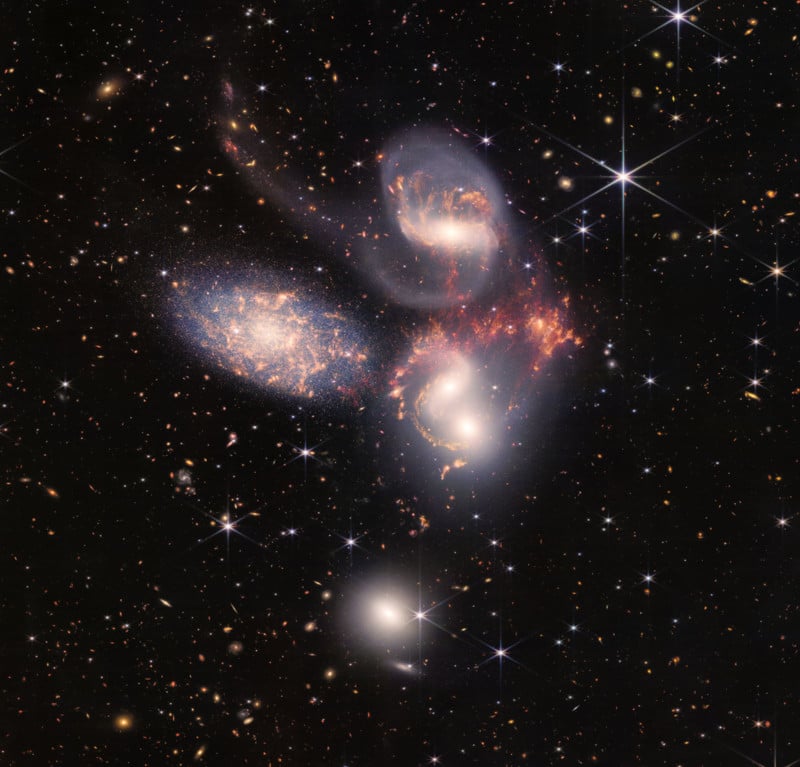 “The Webb image (red, orange, yellow, green, blue) of this object features never-seen-before details of the results of these interactions, including sweeping tails of gas and bursts of star formation,” NASA explains.

Infrared data from the Spitzer Space telescope, now retired, is included in the below composite.

“The Chandra data (light blue) of this system has uncovered a shock wave that heats gas to tens of millions of degrees, as one of the galaxies passes through the others at speeds of around 2 million miles per hour. This new composite also includes infrared data from NASA’s now-retired Spitzer Space Telescope (red, green, blue).”

Shortly after the publication of Stephen’s Quintet and four other targets, NASA released the Webb telescope’s photo of the Cartwheel Galaxy, which astronomers say was formed as the result of a high-speed collision that occurred about 400 million years ago. It is made up of two rings: a bright inner ring and a colorful outer ring, both of which expand outward from the center of the shockwave in what the Webb team describes looks like a shockwave.

Webb’s photo is a composite image created from two of its cameras: the Near-Infrared Camera (NIRCam) and the Mid-Infrared Instrument (MIRI) and can be seen below: 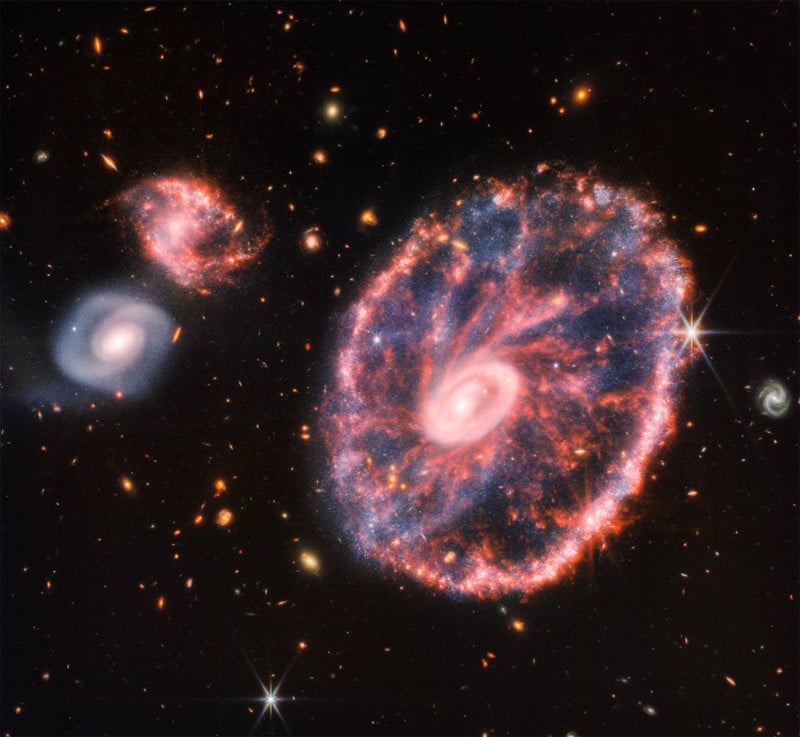 SMACS 0723.3–7327, located about 4.2 billion light-years away, is a galaxy cluster that plays host to hundreds of individual galaxies. It was actually the first photo captured by the Webb telescope ever shared as it was the preview photo President Joe Biden teased the day before the full release of the first five photos captured by the advanced observatory. 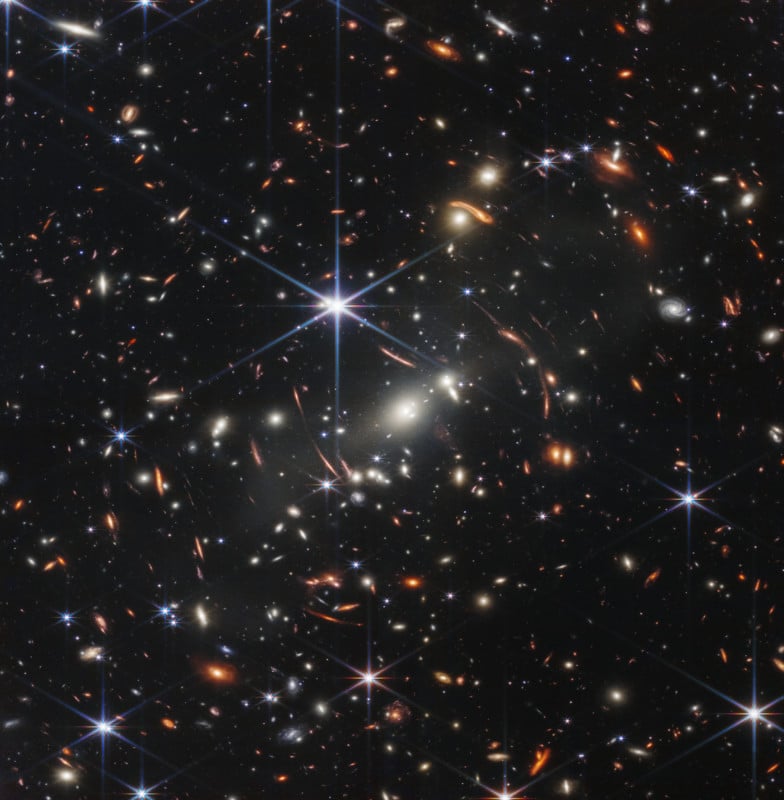 Not only is the photo the first from Webb to be seen by the public, it is also the highest resolution photo of deep space that has ever been taken. The light captured by Webb in this photo has traveled for more than 13 billion years.

“As some of the largest structures in the universe, [galaxy clusters] are filled with vast reservoirs of superheated gas that is seen only in X-ray light. In this image, the Chandra data (blue) reveals gas with temperatures of tens of millions of degrees, possessing a total mass of about 100 trillion times that of the Sun, several times higher than the mass of all the galaxies in the cluster,” NASA says.

“Invisible dark matter makes up an even larger fraction of the total mass in the cluster.”

The Carina Nebula is one of the brightest and largest nebulae in the night sky, located about 7,600 light-years away in the southern constellation of Carina. The photo below, captured by Webb, was one of the first five photos released by the telescope team earlier this summer and is perhaps the most visually striking. 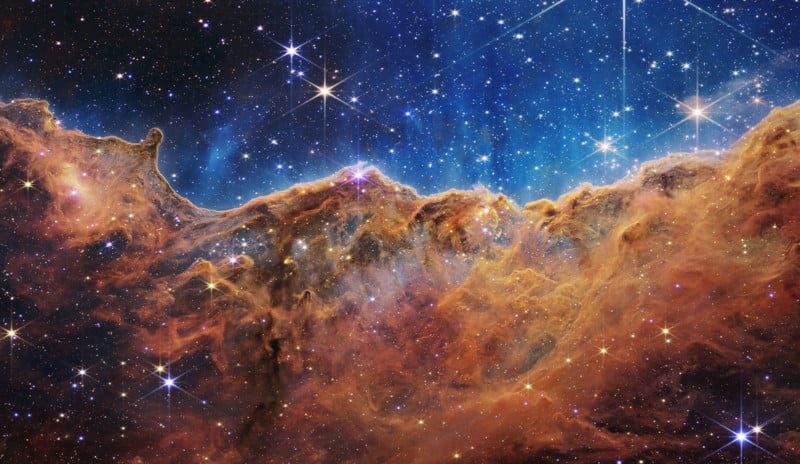 Chandra’s data of the what are also referred to as the “Cosmic Cliffs” appears pink and reveals over a dozen individual X-ray sources.

“These are mostly stars located in the outer region of a star cluster in the Carina Nebula with ages between 1 and 2 million years old, which is very young in stellar terms. Young stars are much brighter in X-rays than old stars, making X-ray studies an ideal way to distinguish stars in the Carina Nebula from the many stars of different ages from our Milky Way galaxy along our line of sight to the nebula,” NASA explains.

“The diffuse X-ray emission in the top half of the image likely comes from hot gas from the three hottest, most massive stars in the star cluster. They are all outside the field of view of the Webb image. The Webb image uses the following colors: red, orange, yellow, green, cyan, and blue.”