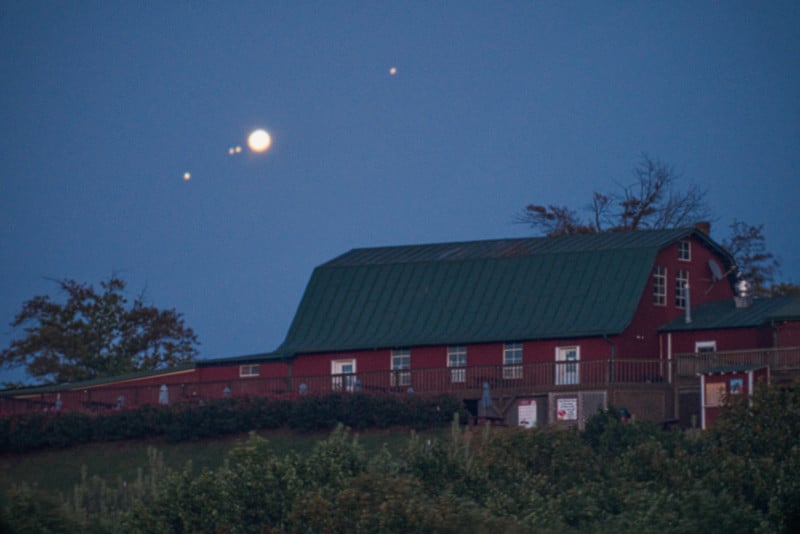 Photographer Brennan Gilmore took advantage of Jupiter’s closest position to Earth in the last 59 years and captured a photo of the gas giant along with its four Galilean moons over the roof of a barn.

The photo shows Jupiter as well as its moons, from left to right, Ganymede, Europa, Io, and Callisto and was captured on Monday, September 16 near Charlottesville, Virginia. The photo was made possible because Jupiter was sitting at opposition, meaning the Earth was situated directly between Jupiter and the Sun, combined with the fact that the gas giant was as close to Earth as it had been in 59 years and as close as it will be until the year 2139. The result is that the angular size of Jupiter in the sky and the brightness of the planet were both extremely elevated.

“Jupiter is rising over the central barn at Carter’s Mountain Orchard, a popular destination in the Charlottesville area which dominates the eastern horizon high above the town. This location on a ridge makes it particularly attractive as a foreground for sunrise and moonrise shots — and I have captured a full moon there before,” Gilmore tells PetaPixel.

“The four to five degree elevation of the ridgeline means that celestial objects have a higher degree of clarity/less distortion than when they rise directly on the horizon, as you are photographing through less air mass.”

Gilmore says he planned this shoot using two apps that he says are central to his astrophotography: Planit Pro and Stellarium.

“Stellarium I used to confirm the field of view — that I would be able to capture all the moons in the frame,” he says. “And PlanitPro helped me narrow down the precise location from which I would need to shoot to capture Jupiter over the building. I used a third app, Atomic Clock, to make sure my time was synced up with the ephemerides of these apps.”

Gilmore says that in order to get the extreme forced perspective he wanted, he used the largest lens — or optical tube assembly (OTA) — that he owns: a Celestron EdgeHD 9.25″ Schmidt-Cassegrain telescope

“This OTA is manufactured for the optical demands of astrophotography, and normally I use it for deep sky and planetary astrophotography. For this shot, instead of using a cooled astro-camera and filter wheel, I shot with a Sony Alpha 7R III, connected to the telescope with a specialized adjustable camera ring that allowed me to get the precise back-focus needed,” he explains.

“I also used a remote trigger and shot with silent shutter as even the most minute vibration at the focal length of 2350mm can cause noticeable blur in images. The camera and scope sat on top of a Sky-Watcher EQ6r-pro mount, although I just used it as heavy-duty tripod, as I was not tracking the sky but rather shooting from a static position.”

Gilmore says he tried several potential locations for the shot he was hoping to get, but unfortunately, in order to to be exactly lined up with the target building, most areas did to work.

“Either there were trees obscuring the view, or it was private housing — one homeowner when I asked for permission to shoot from his property told me, quote: ‘Hell No!’ Finally I found a construction site along the needed axis, and thankfully no one was there at 6:30 PM when I showed up,” he says.

“After I set up all the equipment, I adjusted focus as the temperature dropped. The large mirror and glass objective in the OTA is very sensitive to temperature fluctuations. Clouds menacingly appeared overhead and I was worried that at the right moment the horizon might be obscured. Thankfully the area of the sky I was shooting remained clear,” Gilmore continues.

“When the time came, I did not see Jupiter at first — there are always some slight discrepancies from the apps to what you see — but I was thrilled to soon see a bright light emerging from the trees exactly where I needed it to be in frame. I quickly shot several frames, adjusting ISO and exposure to try to get as low of a shutter speed as possible to ‘freeze’ the image as air turbulence would greatly distort focus and the shape of the planet and its moons. Because Jupiter was so low and the light passed through so much air mass, there is noticeable color distortion on the limbs of the planet and moons — this is due to the varying refraction of different light wavelengths.”

Gilmore says that because of the focal length, the planet passed through the frame in just over a minute, and the time that Jupiter and the moons were all visible was only around 30 seconds.

“Thankfully with the careful planning ahead of time, I was set up exactly where I needed to be and was able to get a unique shot on the day of Jupiter’s closest approach to Earth in my lifetime,” he says.

Gilmore adds that he was hoping to do some closer planetary imaging of Jupiter that night, but shortly after he captured the shot of the gas giant and its moons, clouds obscured the sky.