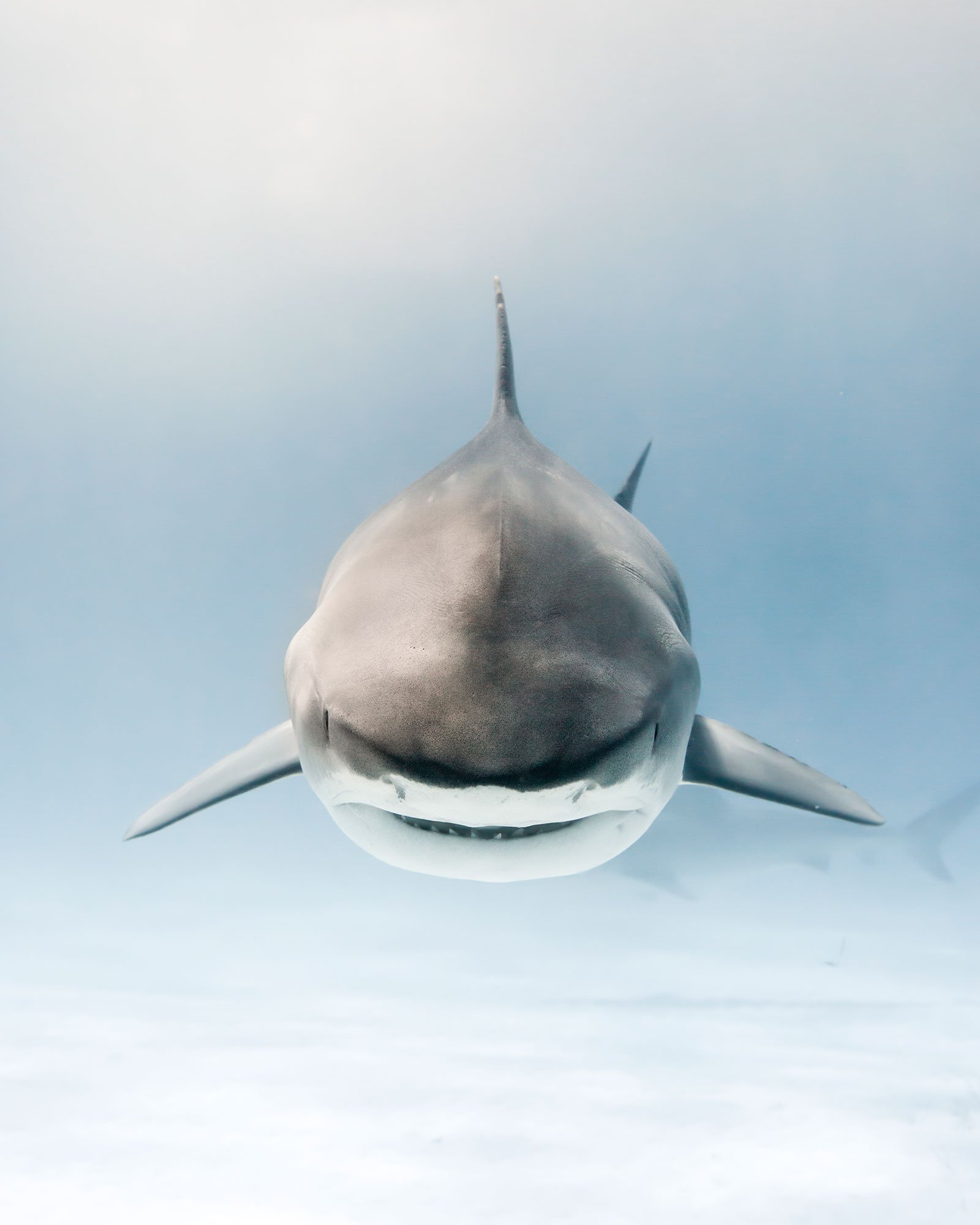 Photographing the fiercely intense yet beautifully captivating essence of sharks are just a few of shark advocate Mike Coots’s many delights and ambitions. In his latest images from a trip off Guadalupe Island, Mexico, Coots skillfully manages to interpret aspects of the animals that are often misconstrued or feared due to negative portrayals in media.

“I feel sharks are given an incredibly bad rap, a reputation that’s been created by Hollywood,” Coots says, speaking to PetaPixel.

“The inspiration behind my imagery is to shift that. Sharks are beautiful, intelligent, and much more than a set of sharp teeth. They are both brawn and brains. When you dive with sharks, it becomes obvious they have different personalities, and I try to bring that out in my photographs. The first time I saw a great white, I was amazed at how blue their eyes are, whereas with Hollywood films it’s always black and lifeless.” 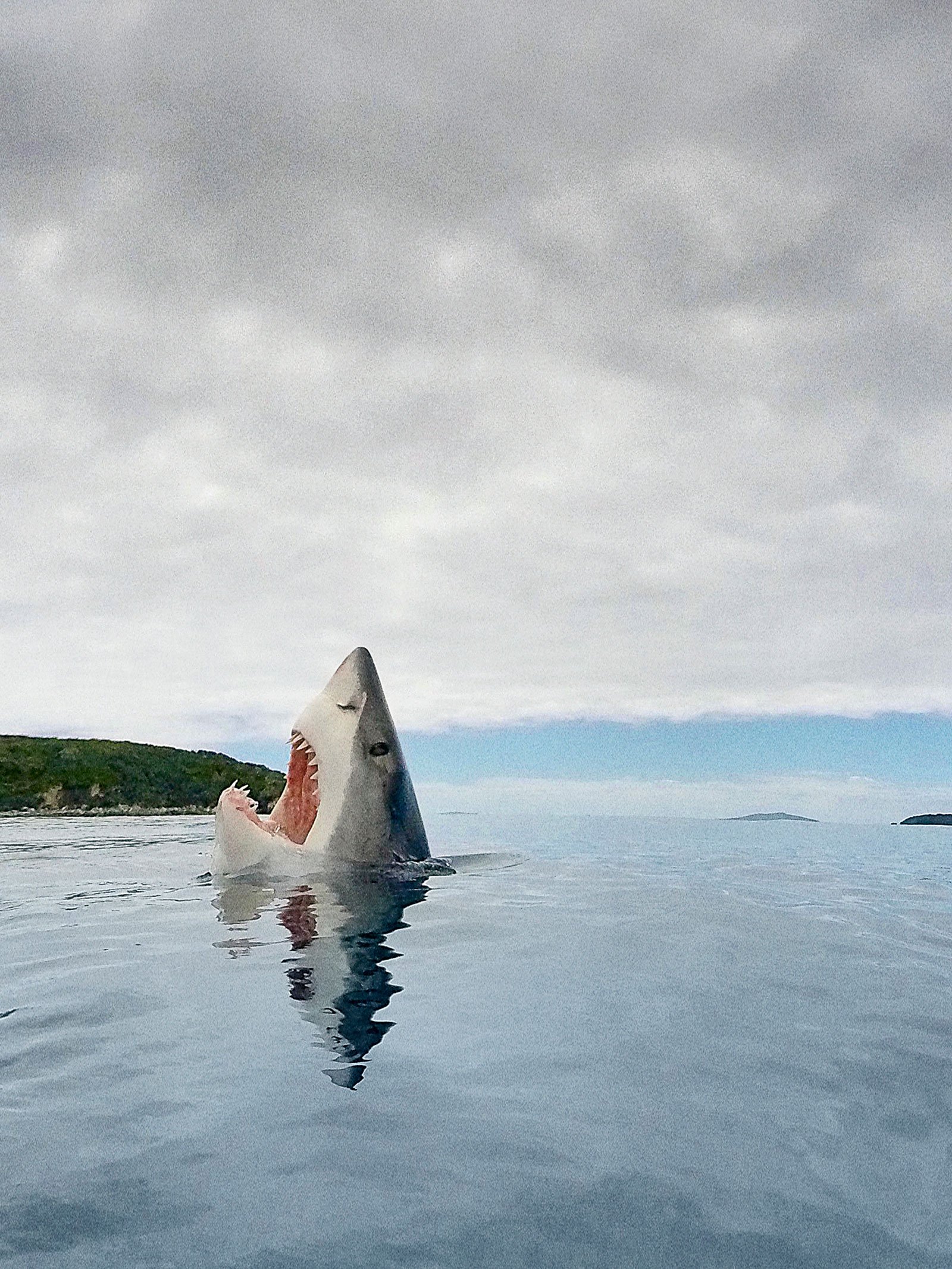 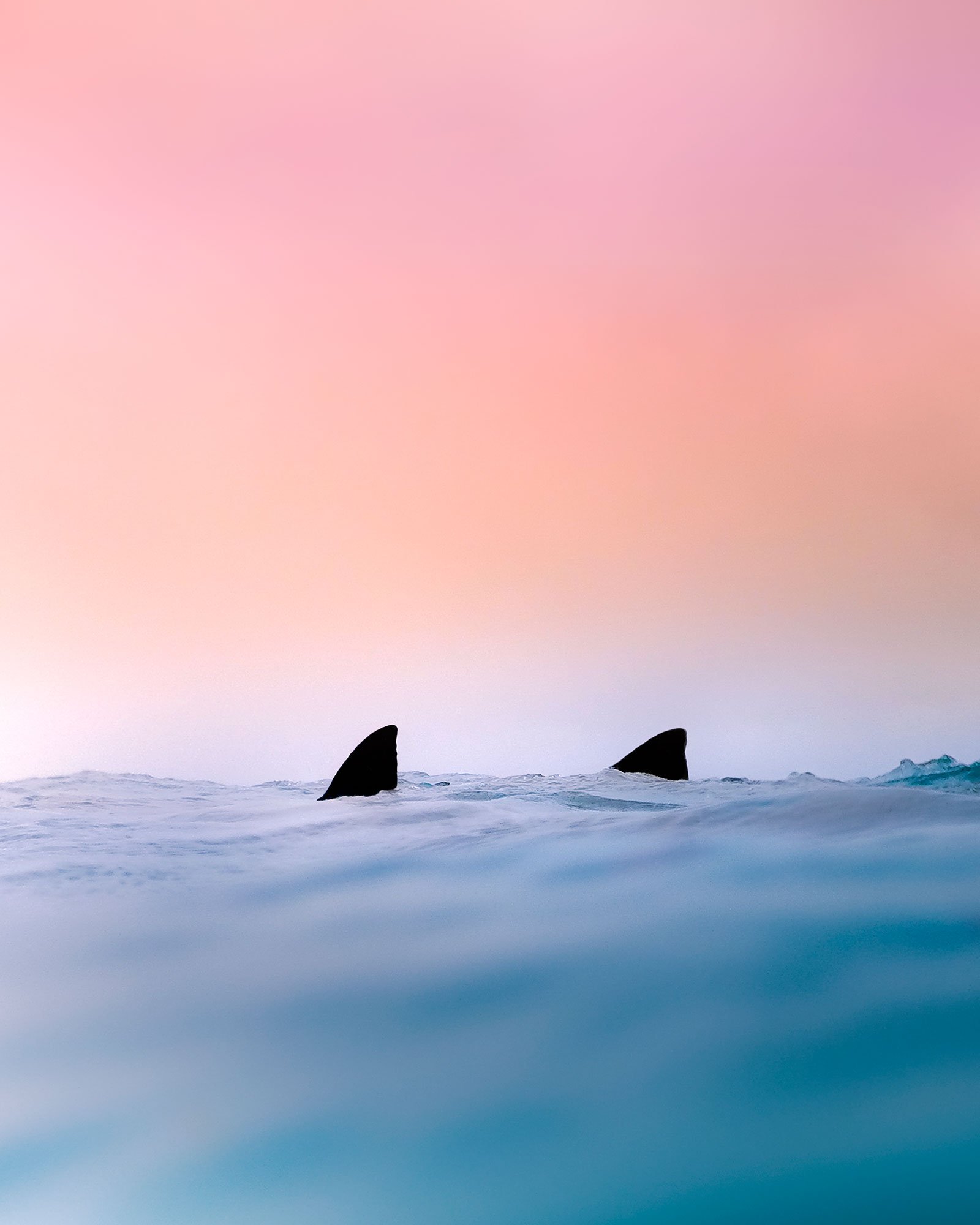 In a series of spellbinding, spectacular captures, Coots delivers and highlights a riveting up-close and personal collection to his viewers. The images aid him in his advocacy of the protection of the animals while bringing awareness of the threats they face and encouraging understanding, concern, and action from viewers.

Born and raised on the Hawaiian Island of Kaua’i, Coots has fostered a deep admiration and respect for nature and the sea. The shark activist’s passion for photography is also uniquely tied into a run-in he had with a tiger shark in his late teens. After losing his right leg in the encounter, and while in rehabilitation, Coots began filming and photographing surfers and the sea. As time passed and after watching the documentary Sharkwater, Coots then grew active in shark legislation and conservation. 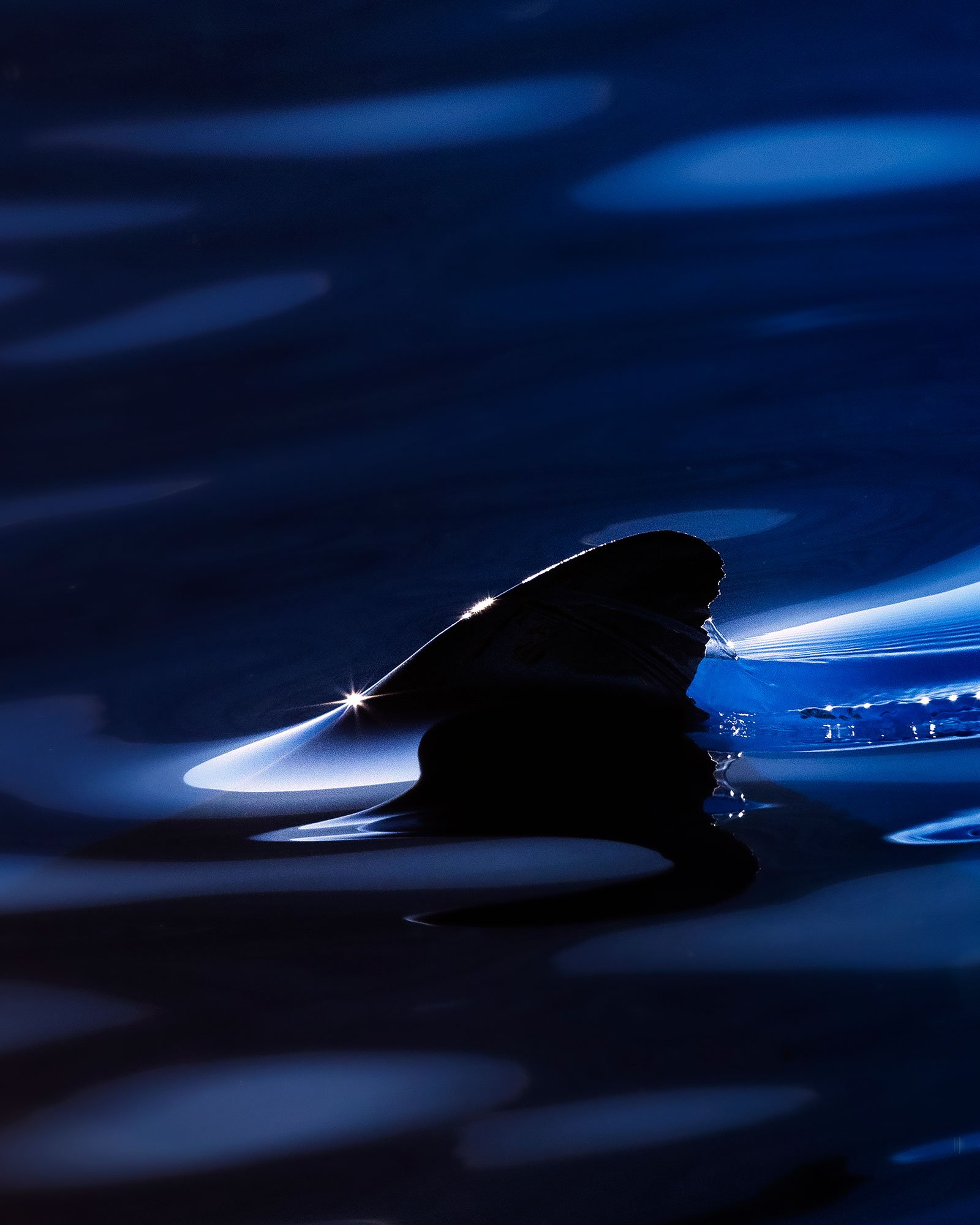 “I had no idea how important a healthy shark population is to a healthy ocean, and how many were being needlessly killed for their fins. I felt compelled in my unique situation as a shark attack survivor to speak out for the sharks, and was active in getting shark laws passed here in Hawaii and Washington DC,” Coots continues.

“During this time, I got invited to go shark diving, brought my camera along, and after photographing my first shark, there was no other subject on Earth that captivated my interest like that. Sharks are the ultimate muse,” he says.

Coots’s images exhibit a bewitching assortment of apex predators that equally inspire as well as intrigue the imagination. Capturing this kind of atmosphere means that he is thorough in his preparation and planning. This commitment has contributed to his successful captures, a process he doesn’t take for granted. 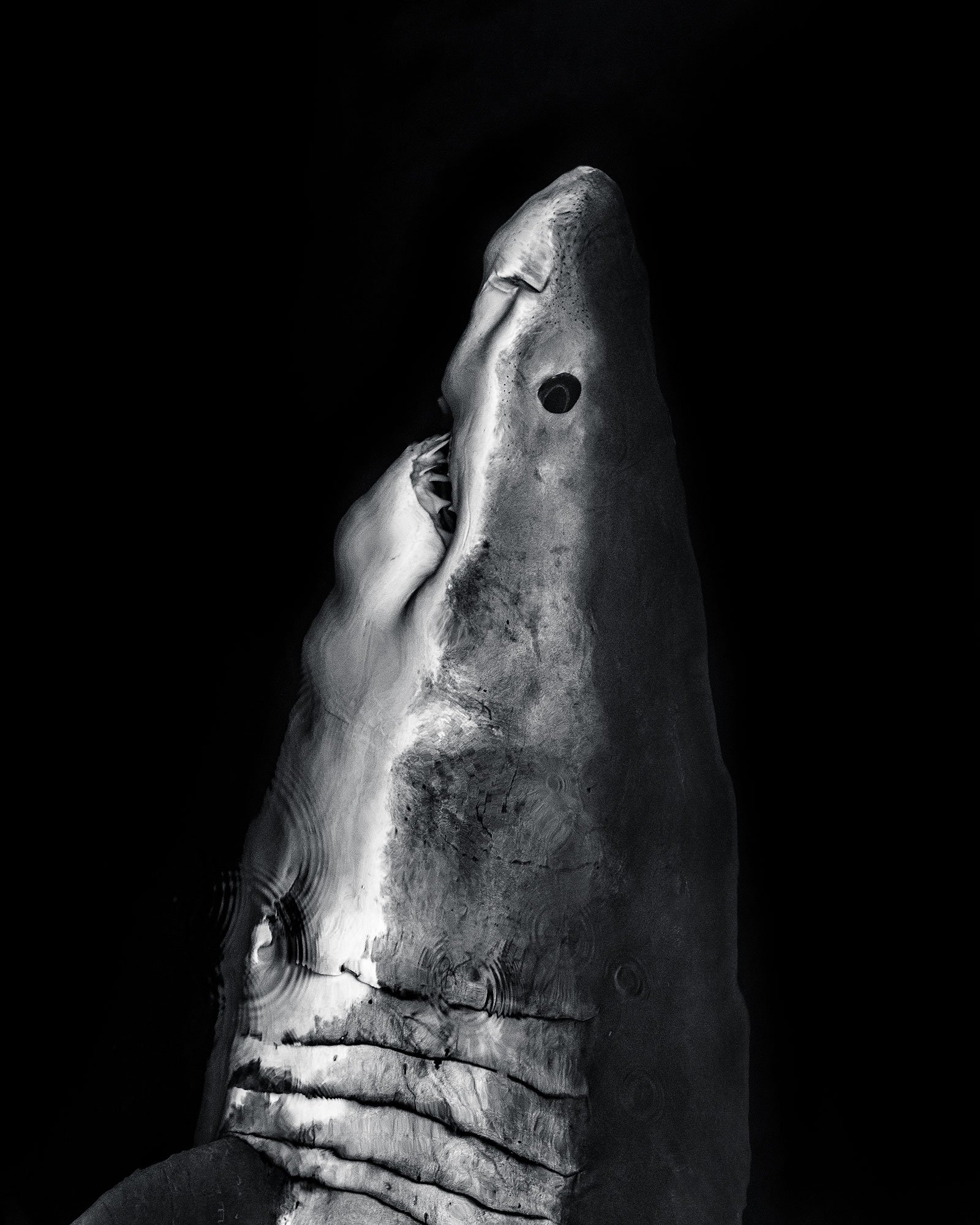 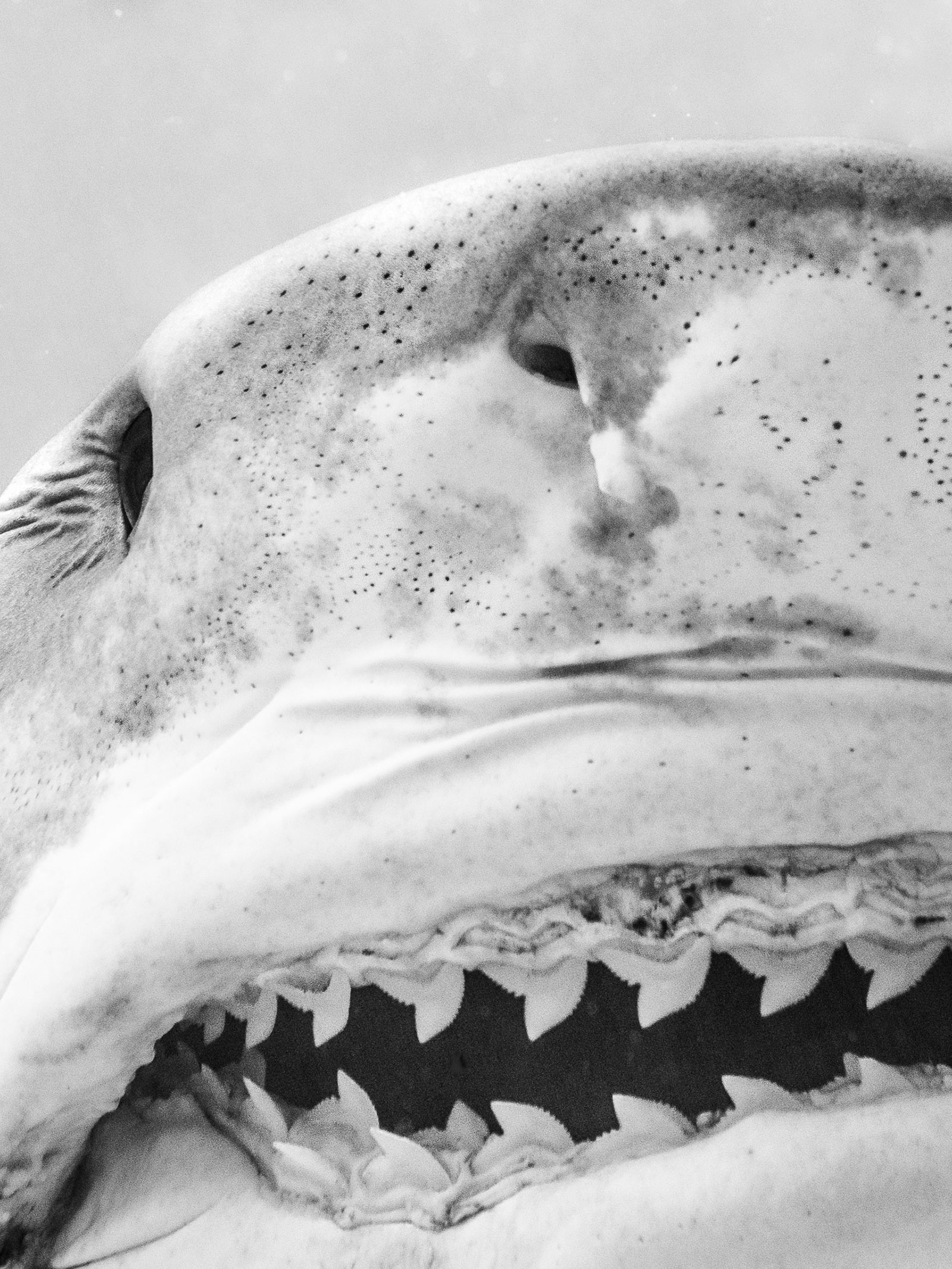 “I’m very focused on pre-production and visualizing shots. I spend a lot of time prepping my gear. There is an added complexity because often Scuba gear is involved and there are safety factors in making sure your gear is in top-notch condition,” Coots explains.

“Your life can really depend on it. [I’m] often on boats for a week at a time with no Wifi or camera stores nearby, so you must plan for that as well. Double checking you have every cable, memory card, etc. I really believe ‘luck favors the prepared.’” In the water, Coots also stresses the importance of being calm and relaxed to capture a natural atmosphere.

“I find when underwater, it’s best to be as present as possible, and let moments unfold around you without making them happen. My best work is when I sit back and observe nature around me, and not go chasing down a shark. Being in a calm, relaxed state brings in much better imagery than being overly excited and hyper. Sharks like all fish can sense that and will often keep a big distance because of it,” he says.

Wildlife photography has its host of challenges, and as enthralling as Coots’ shark images are; precision, awareness, and patience remain key to safety and success. “When shooting sharks you need to be keenly aware of both the sharks you see and the ones you don’t. That means always having your head on a swivel and not messing around with settings or flipping through images you just shot,” he continues.

“Some of the best underwater photographers are better drivers than they are at photography. It’s because they know their environment, specialized dive gear, and how marine wildlife thinks,” he says.

“Sharks are elusive and some species are hard to locate… once you have a shark to photograph, they can be shy and only in the distance, or swimming by so fast it’s a challenge to lock focus. It’s really a grab bag of challenges, and I think that’s the part of it being so rewarding and fun. It’s an incredibly difficult subject to shoot, and I wouldn’t want it any other way.”

Coots uses the Canon R5 in an Aquatech water housing. He stays away from strobes, and always dives into clear waters. When it comes to taking the shot, Coots admits his method isn’t conventional. 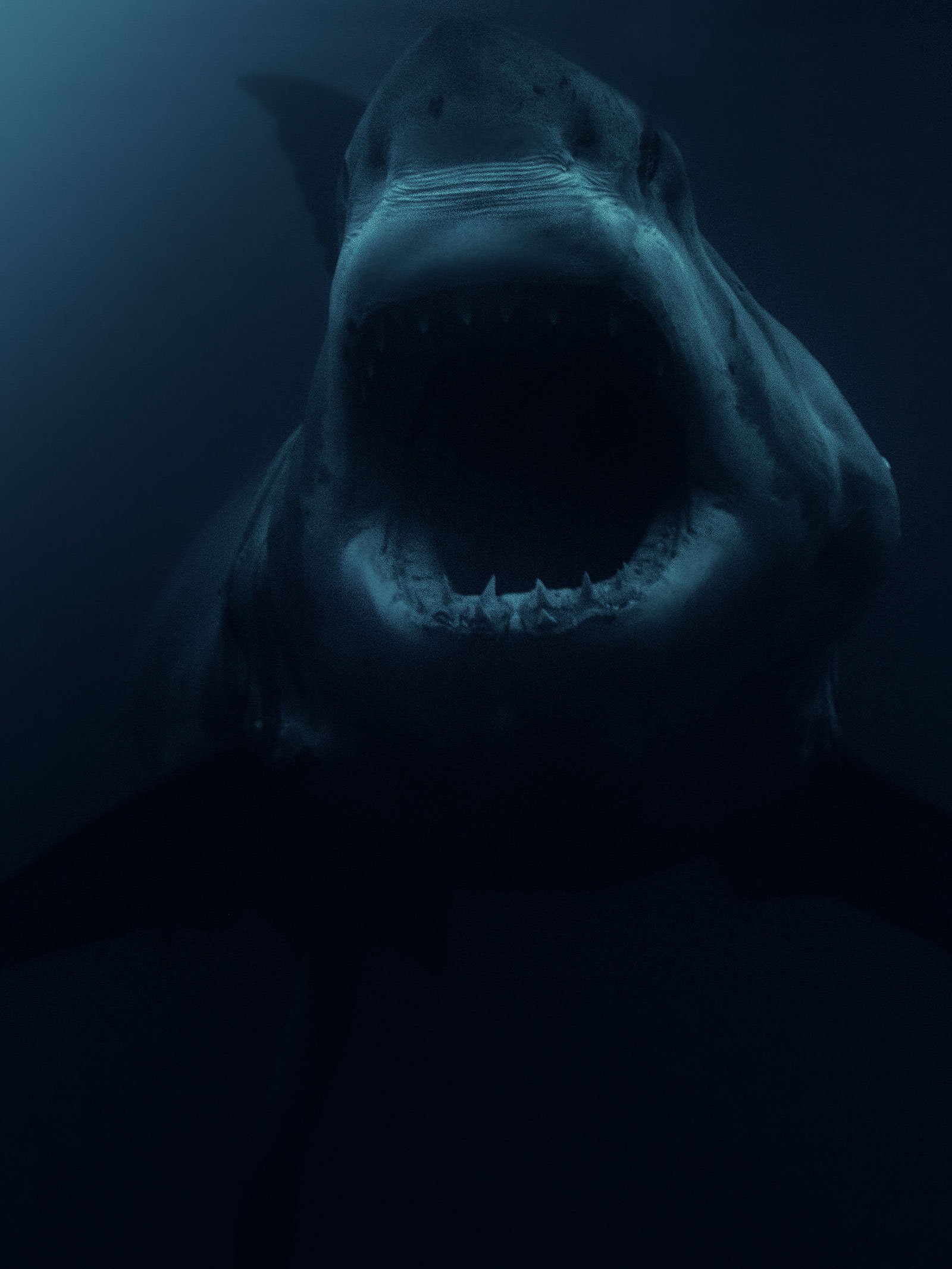 “My underwater approach is a bit unorthodox, as I don’t shoot wide angle or fisheye like the majority of underwater photography. I imagine my subject the shark is a person, and use the same lens I would for portraiture. My go-to is the 50mm 1.2 and often use the 24-70 f/2.8 on the 70mm side and even a 70-200 f/2.8 lens. I use the same housing and swap out lens ports depending on my lens,” Coots explains.

“Sharks are incredibly massive and their size and presence are very impressive underwater […] I shoot manual, with the ISO around 400-800 depending on depth and clarity, and a shutter speed around 1/500 to 1/1000.”

Coots utilizes angles and vantage points in a sleek and surprisingly inviting way, and garners a heightened appreciation for oceans and oceanic life and the symbiotic relationship people have with both. “Everything in the ocean is connected. From the balance of the trophic system and food web, there are duplicate checks and balances under the waterline. Above the surface and on land, what we do affects the sea, and in turn, the health of the sea affects us. The interconnectedness between humans and nature is about coexistence, and the well-being of our Oceans is paramount to us having many more years on Earth. There is even the fact that every other breath we take comes from the sea, as over 50% of the oxygen we breathe comes from the Ocean.”

The online response to Coots’s work has been incredibly positive for the activist and is promising towards reshaping the narrative on sharks. “When I speak to kids at schools and show them images that aren’t scary but often comedic, they seem to have a whole different mindset than the older generations that grew up on JAWS. The kids leave excited to hopefully see a shark in the wild, and that’s exactly the reason for my work.”

As for the future of his work and advocacy, Coots is working on a coffee table book of his images and remains unwaveringly focused on education and inspiration to all those who would bravely listen and observe.

“[Sharks] Apex. Not by insanity but by necessity. It’s easy to only show images of jaws and teeth —and get a lot of attention—but that’s only a small part of what makes a shark, a shark. I love [causing] emotions from a beautiful shark in beautiful light, just swimming by. My hope is that my work gets someone to love a much-hated species, by seeing something in themselves when looking at shark portraiture. I think if we can fall in love with an image, an animal then we tend to learn and care much more for it. That’s my hope, that sharks don’t go the way of the dinosaurs.” 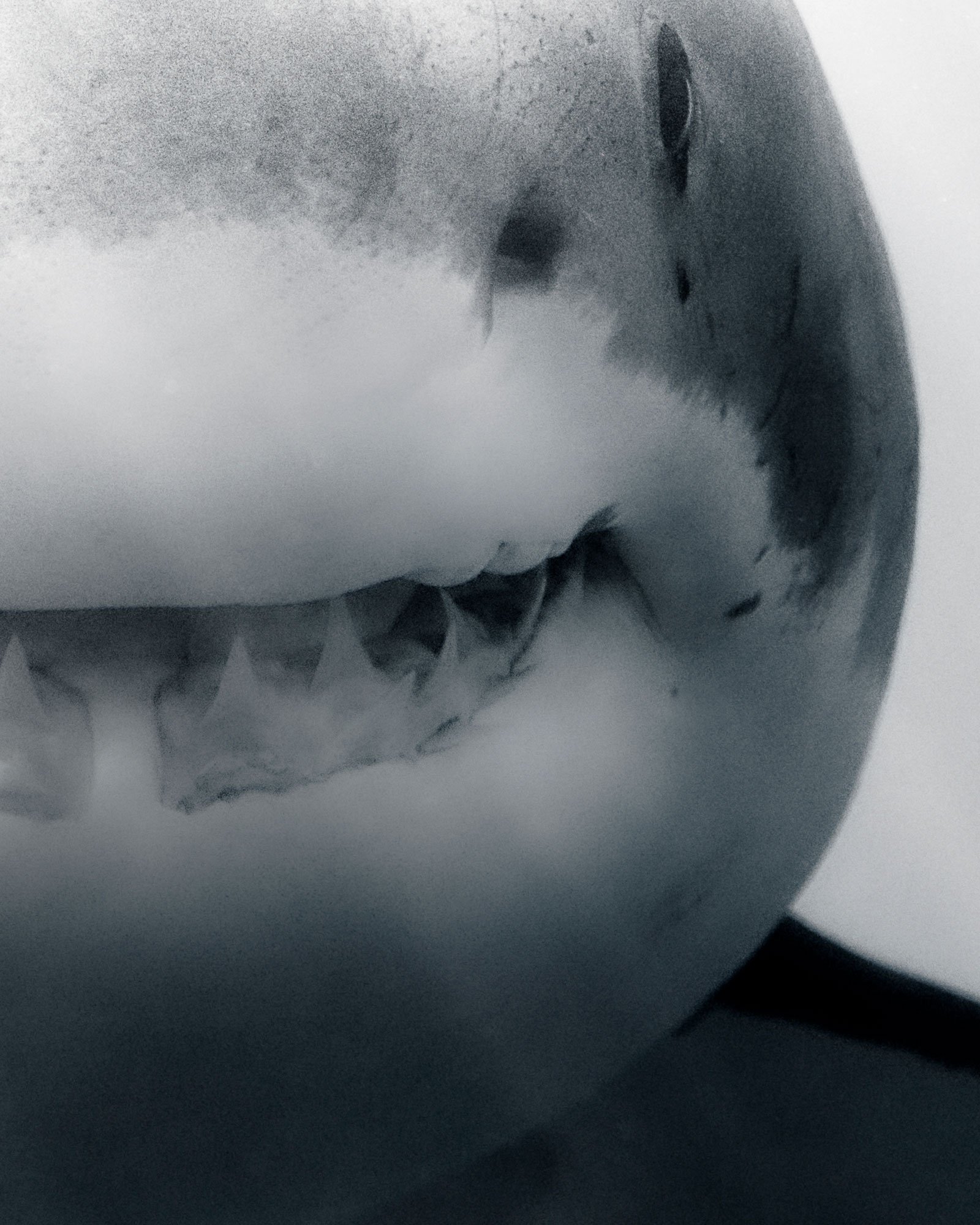