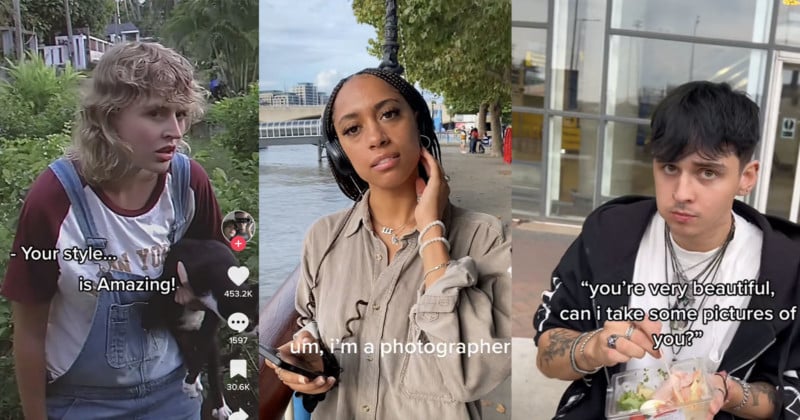 A new TikTok video trend sees users mocking street photographers and how they approach people to pose for photographs.

Street photography has surged in popularity on TikTok. San-Francisco-based photographer Alex Stemplewski has become a star for his pictures of strangers on the street who he claims makes “famous” with his portraits.

Street photographer @iamjeanblack has also become one of the most popular content creators in his field on the platform — with some of his stunning portraits amassing over 74.1 million views.

In these TikTok videos, street photographers are often filmed approaching people on the street. The photographers are seen interacting, sometimes awkwardly, with strangers as they compliment and convince them to let them take their portrait. While the end of the TikTok video shows the final, impressive portraits from the photoshoot.

In a new video trend, TikTok users are now mocking how street photographers approach and persuade strangers to pose for their images — with often hilarious effects.

On TikTok, the #streetphotographer trend sees users make amusing videos in which they pretend to be a street photographer introducing themselves to a stranger. They then post comically terrible portraits from the shoot and make it sync to a favorite sound widely used by photographers on the platform.

The videos mock the way street photographers will often interrupt a person while they are busy or running errands. The satirical clips also ridicule the way photographer will typically praise their style or outfit in order to get them to agree to be pictured.

Another trend on social media saw Generation Z users mocking the “telltale” way millennials film videos. Younger users on TikTok called out the way millennials take a brief pause before they start filming a video in order to make sure the camera is actually recording. This trait called the “millennial pause” is an attribute that is noticeably absent when Generation Z films videos.