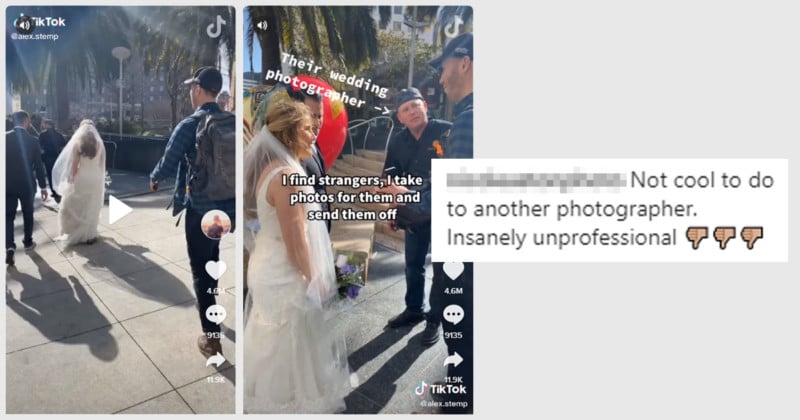 A photographer and TikTok star is catching criticism after posting a video of himself crashing a wedding photographer’s photo shoot with a bride and groom, asking the couple to take time out of their session to pose for him instead.

San Francisco-based photographer Alex Stemplewski, who has 188,000+ followers on Instagram and 6.9 million+ followers on TikTok, just shared a full behind-the-scenes clip, saying he received “a lot of heat” for his original share and that he wanted to share more of what happened to let the public decide if what he did was wrong or not.

I took a lot of heat for this TikTok where I interupted a newlywed photoshoot. Showing the full video to let you decide if what I did was wrong or not

After walking up to the couple doing a shoot in San Francisco’s Union Square, Stemplewski introduced himself and asked them (and their photographer) if he could have 5 minutes of their time. The wedding photographer graciously agreed to put his own shoot on pause for a maximum of 5 minutes while Stemplewski shot his own photos of his clients.

Stemplewski says he only ended up using 2.5 minutes, and here are the resulting portraits he shared on Instagram:

I saw a newlywed couple and wanted to give them a gift. I politely asked their photographer if I could have 5 minutes with them to take a few photos. Swipe through to see the results and the behind the scenes video that captured it all. Congratulations to newlyweds Gage and Jess. I wish you the happiest and most amazing wedding and marriage 💕. Thank you to @israsd for bravely volunteering to film me approaching strangers that day and capturing this event.

“I saw a newlywed couple and wanted to give them a gift,” Stemplewski writes. “I politely asked their photographer if I could have 5 minutes with them to take a few photos.”

The original Instagram post racked up over 11,000 Likes after it was shared on March 8th, but many commenters weren’t amused by Stemplewski’s antics and spoke up in defense of the wedding photographer.

Here’s a sampling of some of the critical responses:

The photographer Stemplewski interrupted was Bill Payne. People have been flooding Payne’s photos of the couple with praise for both his work and how he handled the unexpected disruption.

How to Easily Remove Color Casts in Photoshop