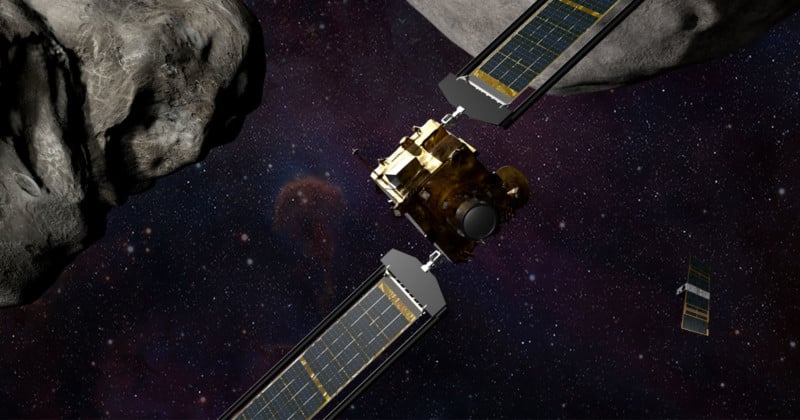 NASA’s Double Asteroid Redirection Test (DART) is the world’s first planetary defense test mission and it has deployed a smaller “mini photographer” spacecraft that will record all of the details of its planned impact with an asteroid.

DART is a NASA spacecraft that is designed to deflect an asteroid as part of a test program that would serve as a sort of defense system against objects in space. It is scheduled to smash into the asteroid Dimophos on September 26.

As explained by Gizmodo, while Dimophos isn’t a threat, the collision will serve as an experiment to see if it can be pushed from its current trajectory which would, in theory, allow NASA to prove it has the capability to redirect any future asteroids that might pose an actual threat to Earth.

DART won’t survive the impact, but it successfully deployed a small camera that will record the action and share that information with NASA for further evaluation.

This LICIACube, short for Light Italian CubeSat for Imaging Asteroids, successfully popped out of its spring-loaded box on September 11, exactly 15 days before the scheduled impact. It signaled to the DART team that it was successfully separated and online an hour later.

“We are so excited for this — the first time an Italian team is operating its national spacecraft in deep space!” Simone Pirrotta, LICIACube project manager for the Italian Space Agency, which contributed and manages LICIACube, says.

“The whole team is fully involved in the activities, monitoring the satellite status and preparing the approaching phase to the asteroid’s flyby. We expect to receive the first full-frame images and to process them a couple of days after DART’s impact. We’ll then use them to confirm impact and to add relevant information about the generated plume — the real precious value of our photos.”

LICIACube was designed, manufactured, and is operated by the Italian aerospace company Argotec with participation from the National Institute of Astrophysics, and the Universities of Bologna and Milan. It is programmed to document the effects of DART’s impact and will collect images of the asteroid surface as well as any debris ejected from the crater that DART is expected to leave on its surface.

“Each will capture scientific data that will inform the microsatellite’s autonomous system by finding and tracking the target asteroid Dimorphos throughout DART’s encounter,” NASA explains. “The LICIACube team is now in the process of calibrating the spacecraft and its payload by capturing images of celestial bodies at different rates and integration times.”

The images will be combined with data collected by DART itself and should the mission be successful, will inform future strategy for dealing with risks from space to Earth.

Image credits: Header image is an illustration of NASA’s DART spacecraft and the Italian Space Agency’s (ASI) LICIACube prior to impact at the Didymos binary system. | NASA/Johns Hopkins APL/Steve Gribben